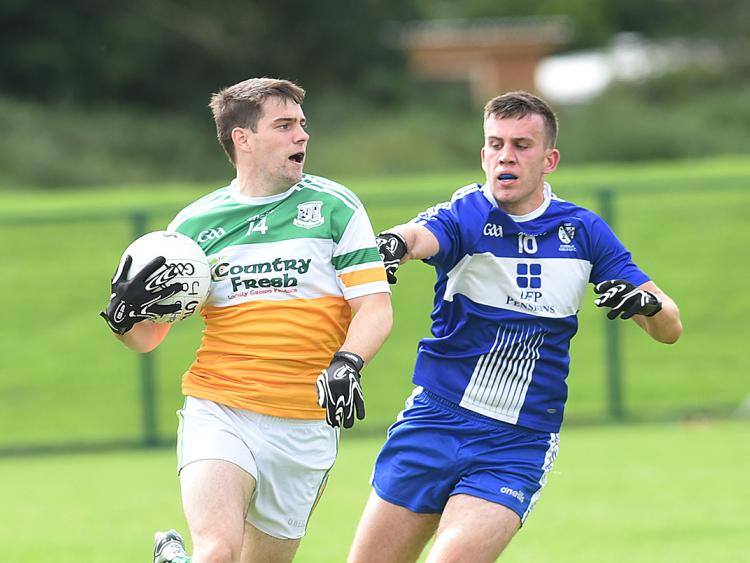 The Joes put themselves in contention for a quarter final spot with a first outing three-point win over 2018 finalists Dundalk Gaels at Darver on Sunday afternoon.

Although the Gaels had the wind in their backs in the first half, it was the Joes who settled better and led at the end of the first quarter.

The Joes opened the scoring in the first minute with a strong solo through by Ben Collier who set up Conall McCaul to tap over the first point. The Gaels responded with a fine through ball and a Kevin McArdle mark that was converted to level the game on four minutes.

Alan McKenna then delivered a fine pass to Conall McCaul who in turn found Ben Collier coming through to crash the ball to the Gaels net. A Daire Smyth fisted point for the Joes and an Eanna McArdle strike from distance for the Gaels had the Joes ahead by 1-2 to 0-2 after 10 minutes. Derek Crilly narrowed the gap to two points with a long range shot off his left.

The Gaels upped the tempo after the water break but the Joes defence did well to hold the Gaels attack with some fine defending from Michael Staunton, Liam O’Leary, Killian Staunton and Conor Neary.

Defences were in top in that second quarter with a single point for the Gaels from David Moloney from all of 50m to leave the half time score at 1-2 to 0-4 in favour of the Cluskey Park side.

The Joes with the wind at their backs were in top gear in the early stages of the second half with three points in as many minutes. Conall McCaul with two excellent points, the first from the left from 40m out and the second from wide right was followed by another superb strike off his left from 50m by Ben Collier.

The Joes continued to control the game and when Killian Staunton soloed through with Thomas Smyth on his shoulder the pass from Killian was timed to perfection and Smyth drove the ball low across the face of the goal to the Gaels net.

The Joes were now ahead by seven, 2-5 to 0-4 on 37 minutes and very much in control however the game was soon turned on its head with the Gaels scoring 2-1 in three minutes.

First, the ever threatening David Moloney added a point and then a Derek Crilly effort was held up in the wind and the inrushing Barry Watters deflected the ball to the Joes net. A minute later the ball was in the Joes net for a second time when a high ball into the goalmouth was punched to the net by Derek Crilly to leave the sides level for the first time at 2-5 each on 40 minutes.

Just when it appeared the Joes had lost their way, up stepped Conall McCaul to collect the Joes kick out and solo through to put the Joes ahead with another excellent point on 45 minutes.

The next 10 minutes delivered three more Joes points, first Gabriel Bell soloed through to find Oisin McGuinness to float over a superb point. McGuinness pointed again from a 40m free with Jack Mulligan doing likewise from a free that was brought forward and the Joes were ahead by four, 2-9 to 2-5 on 55 minutes.

The Gaels pressed hard during the final eight minutes but again they found few scoring opportunities in a tight Joes defence with a Jason Clarke 13m free their only score, as the Joes held out for victory.

Nh Mairtin sent out major signal of intent as they opened their Senior Championship campaign with a comprehensive victory over Dreadnots at Darver on Sunday evening.

The Clogherhead men simply had no answer to the quality of a Mairtins side who dominated from the opening whistle and underlined their quality by having a total of eight different scorers on the night.

The tone for the game was set in the opening moments when, despite playing against the wind, the Jocks found the net through Stephen Campbell. Sam Mulroy (2) and Sean Healy added to that score to leave their side 1-3 to no score ahead on 15 minutes.

Sam Mulroy then had a penalty saved by Ciaran Cunningham before the Dreadnots got off the mark through Cian McEvoy.

However, there was no let up from the Mairtins as Mulroy added to the tally before Conor Whelan added a second goal just before the break to make it 2-5 to 0-3, with Pepe Smith landing the last point of the half for the Dreadnots.

The prospect of a comeback was never really on the cards in the second half and the Mairtins erased any lingering hope by continuing to dominate and they emphasised their quality by landing the first nine points of the second half. Wayne Campbell and John Clutterbuck added their names to the scorers as Conor Whelan and Mulroy were also on target.

The Dreadnots did rally in the closing ten minutes with four points, but the Mairtins had the final say with two points from Eoghan Callaghan to seal in impressive win.

St Marys scored a dramatic victory time victory over Newtown Blues at Darver on Sunday afternoon thanks to an injury-time goal from Daire McConnon and a Ciaran Keenan point.

The Blues looked to be on course for their second win in Group 4 when they led by three points in the 60th minute but the Ardee men refused to give up and hit back to make a winning start to their campaign.

In what proved to be a lively contest between two of the title contenders, it was the Marys who were first on the scoreboard through Ronan Carroll, but the Blues replied with three in a row from Ross Nally and Ciaran Downey (2).

The Drogheda men were looking good at that stage and their good approach play was rewarded when they added points from Conor Moore, Downey and Nally in response to a Ciaran Keenan effort to lead by 0-6 to 0-2.

The Ardee men were working hard to stay in contention at that stage but the Blues remained on top and John Kermode and Downey helped extend the lead to 0-9 to 0-3 at the break.

The champions appeared to be in little trouble when Andy McDonnell’s 48th minute point saw the Blues maintain their advantage at 0-13 to 0-7.

Although the Marys kept in touch with scores from Carl Gillespie, Moran and Conor Gillespie, they appeared to have run out of time when they trailed by 0-14 to 0-11 after a John Kermode point. However, in a dramatic conclusion McConnon drew his side level before Keenan landed the winning score.