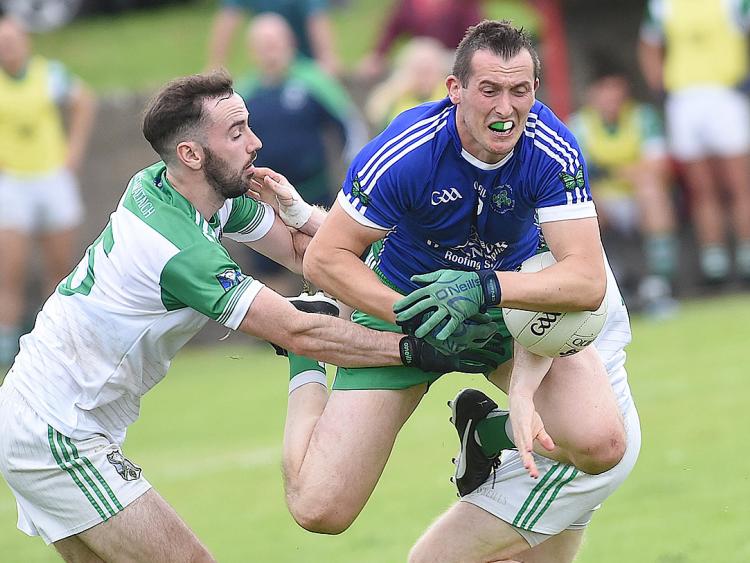 Eoin O’Connor landed a point from a free two minutes from the end of an absorbing contest to rescue a point for St Patricks at Dowdallshill on Sunday afternoon.
Jim McEneaney looked to have given the Gers victory in this Senior Championship Group 1 encounter when he pointed on 51 minutes but his side were unable to hold out as the Lordship men snatched a draw.
It was the Geraldines who made the brighter start to the contest with Jim McEneaney getting his side off the mark before Michael Rogers added a goal immediately afterwards to put his side four clear.
The Pats got off the mark through Eoin O’Connor on seven minutes and Cathal Grogan followed up with a second point soon after.
However, the Gers regained control and reeled off three unanswered points through Josh Arrowsmith, McEneaney and Rogers to lead by 1-4 to 0-2 after 20 minutes.
It wasn’t looking promising for the peninsula side at that stage but they responded to the challenge in the closing ten minutes of the half and points from Cathal Grogan, O’Connor and Joseph Connor along with a goal from Alan O’Connor on 26 minutes had them back in the game.
However, that spell also saw the Gers find the target through Feidhlim Joyce and Jack Reid as they went in leading by 1-6 to 1-5 at the break.
The second half started with goalkeeper Martin McEneaney levelling the game from a ‘45’ and it remained tight for the remainder of the game.
It looked as if the Gers might do enough claim the win as a point from Jack Reid saw them edge clear by 1-9 to 1-7 on 40 minutes, however, O’Connor and Jack Murphy landed scores to tie the game up again.
In a tense finale, McEneaney put the McGeough Park side ahead once more only for O’Connor to secure a share of the spoils when he sent over a free in the closing stages.
ST PATRICKS: Martin McEneaney 0-1; Kevin Toner, Eoghan Lafferty, Barry Dunne; Alan O’Connor 1-0, Darren O’Hanlon, Leonard Gray; Dessie Finnegan, Martin Breen; Ciaran Murphy, Eoin O’Connor 0-4, Aidan McCann; Joseph Connor 0-1, Cathal Grogan 0-2, Jack Murphy 0-2. Subs: Jody Keenan for M Breen, Rory Duffy for K Toner, Tadhg O’Connor for J Murphy.
GERALDINES: Sean McEneaney; Ryan Trainor, Dan Corcoran, Tiarnan Hand; Gareth Neacy, Jack Traynor, Fearghal McDonald; James Craven, Matt Corcoran; Josh Arrowsmith 0-1, Shaun Callan, Michael Rogers 1-1; Feidhlim Joyce 0-1, Jim McEneaney 0-5, Jack Reid 0-2. Subs: Stephen Reidy, Conor Rafferty, Paddy Hoey, Neil Jones, Shane O’Hanlon.

ST MOCHTAS 1-13
DREADNOTS 0-16
Dreadnots landed two late points through James Califf to secure a draw in a dramatic finish to their Group 2 Senior Championship encounter with St Mochtas at Dunleer on Sunday afternoon.
Despite being reduced to 14 men for the final quarter, it looked as if the Louth Village side were going to hold out for an impressive victory when David Lennon landed a late point but the Dreadnots hit back to secure a draw.
The Mochtas were quickest out of the blocks as points from Ciaran McMahon, Danny Kindlon and Declan Byrne had them three points to the good before the Dreadnots got off the mark with a Pepe Smith point.
The teams then traded points before the Clogherhead side moved up a gear and dominated the game for the remainder of the half. Some good attacking play was rewarded when they scored seven points, including two efforts from Peter Kirwan, in an impressive spell before the break with two points from Declan Byrne the only reply from the Mochtas as side went in at the break trailing by 0-9 to 0-6.
The Dreadnots continued to enjoy a greater share of the possession early in the second half and looked to be cruising to victory when they added three further points from Smith (2) and Califf to lead by six.
However, just when the game appeared to be slipping away from the Mochtas they struck the only goal of the game through Ciaran McMahon, while points from Declan and Ciaran Byrne cut the gap to a single score.
Despite losing Andrew English to a second yellow card on 43 minutes, the Louth Village men levelled that game at 1-13 apiece with the Byrne brothers again on target.
Eamonn O’Neill, Gerry Kindlon and David Lennon pointed to see the Mochtas take a 1-13 to 0-14 lead but they were unable to hold out as Califf had the final two points of the game to secure a draw.
ST MOCHTAS: Jason Callan; David Lennon 0-1, Philip Englishby, Andrew Lennon; Barry Mulholland, Andrew English, Conor Garland; Eamonn O’Neill 0-1, Declan Byrne 0-6; Craig Lennon, Gerry Garland 0-1, Danny Kindlon 0-1; Ciaran McMahon 1-1, Ciaran Byrne 0-2, Stephen McCooey. Subs: Jamie Farrell for D Kindlon.
DREADNOTS: Ciaran Cunningham; Derek Shevlin, Dermot Campbell, Aaron Scullion; Anthony Williams, Padraig Rath, Barry Faulkner; Cian McEvoy 0-1, James Califf 0-5; Jay Hughes 0-1, Peter Kirwan 0-1, Darragh Shevlin; Dean Hyland, Craig Shevlin, Pepe Smith 0-6. Subs: Carl Monaghan, Ciaran Finnegan.

Newtown Blues held off a brave challenge from Mattock Rangers before securing a two-point victory in their Senior Championship Group 4 clash at the Gaelic Grounds on Sunday evening.
In what proved to be a highly entertaining contest, there was little between the teams throughout the game but in the end the Drogheda men just about did enough to get the defence of their title off to a winning start.
Although Ciaran Downey kicked the first point of the game, it was Mattock who settled quicker and they landed the next three points through David Reid, Adrian Reid and Shane Hickey.
However, the Blues got into their stride and with Robert Carr, Johnny McDonnell and Downey on target, they were level at four points apiece just after the quarter hour mark. Once again the momentum swung the other way when David Reid found the net to put his three clear.
The Blues response to the challenge was impressive as Ross Nally responded with a goal at the other end and with the help of two scores from Rob Carr they went in at the break with a 1-7 to 1-5 lead.
After the first four points of the second half were shared, the Blues struck another major blow to Mattock’s hopes when Nally added his second goal on 40 minutes.
The Collon men refused to give up and they gave themselves hope on 50 minutes when Cathal Fleming found the back of the net to cut the gap to 2-10 to 2-8. They managed to add further points to their tally through Aaron O’Brien and Ben Watters but the Blues made sure of victory with scores from Downey and Carr.
NEWTOWN BLUES: Jay Lowney; Fergal Donoghue, Paul Moore, Kevin Carr; John Connolly, Emmet Carolan, Jamie Kelly; John Kermode, Ciaran Cluskey Kelly; Rob Carr 0-5, Ciaran Downey 0-4, Daire Nally; Johnny McDonnell 0-1, Ross Nally 2-1, Conor Moore 0-1. Subs: Declan McNamara for J Kelly, Thomas Costello for J McDonnell.
MATTOCK RANGERS: Mark Lenahan; Alan Caraher 0-1 Sean Gilsenan, Daire Englishby; Brendan Leacy, Ben McKenna, Michael McKeown; Adrian Reid 0-1, Daniel Bannon; Terry Donegan, Aaron O’Brien 0-2, Shane Hickey 0-1; Cathal Fleming 1-0, Ryan Leneghan, David Reid 1-4. Subs: Ben Watters 0-1 for T Donegan, Shane Maguire for D Englishby, Jack Thompson for R Leneghan.

DUNDALK GAELS 0-17
O’CONNELLS 0-9
Dundalk Gaels got their Senior Championship campaign off to a good start when they had an eight point victory over O’Connells at Ardee on Sunday afternoon.
Eanna McArdle got the Gaels on the board with a free which was quickly equalised by a free from Robert Quigley, before Quigley and Niall Conlon the Bellingham team 0-3 to 0-1 ahead after ten minutes.
The Gaels replied with the next three points from Kevin McArdle, Derek Crilly and Sean Murray to take the lead but a minute later they were level again when Conlon equalised for the O’Connells.
Another free from Eanna McArdle put the men from the Ramparts in front and had it not been for some wayward shooting they could have been further ahead. A good save from Stuart Reynolds kept his team in touch and Ger McSorley missed a great chance to raise the green flag when he could not quite get on the end of a ball that went across the goals.
McSorley put his team two in front and Crilly got his second of the game to increase the margin to three. Bernard Osborne got an excellent point for the O’Connells to leave two between the sides at the break 0-7 to 0-5.
A Conlon free reduced the margin to minimum at the start of the second half but a brace from Eanna McArdle one of which was a free put three between the teams. Points from Conlon and Quigley left the minimum between the teams again and a couple of minutes later the sides were level with a point from Quigley after 43 minutes.
However it didn’t last long as the Gaels went down the field from the kick out and full back Jamie Faulkner put over an excellent point. Points from Jason Clarke and Barry Watters made it a three point game with just less than ten minutes to go. Try as they did the Bellingham side could not get back in the game and further points from Clarke, Crilly and Watters left the score 0-15 to 0-9 with under two minutes remaining.
Points from McSorley and a McArdle free in injury time sealed the victory for the Gaels who will now face St. Josephs next weekend in Group 3.
DUNDALK GAELS: Joe O’Donoghue; Kyle Rafferty, Jamie Faulkner 0-1, James Lynch; Oisin Murray, Dave Maloney, David McComish; Derek Crilly 0-3, James Stewart; Jason Clarke 0-2, Barry Watters 0-2, Sean Murray 0-1; Eanna McArdle 0-5, Ger McSorley 0-2, Kevin McArdle 0-1. Subs: Niall Hearty for J Stewart, Sean McCann for K McArdle.
O’CONNELLS: Stuart Reynolds; Emmet Byrne, Conor Byrne, Salem Rifaie; Jackie Agnew, Stuart Osborne, Eimhin Caldwell; Ciaran O’Brien, Sean Cairns; Dean Corrigan, Conor McGill, Niall Conlon 0-4; Robert Quigley 0-4, Bernard Osborne 0-1, Andrew Sharkey. Subs: Conor Culligan for A Sharkey, Dean Stanfield for C O’Brien.