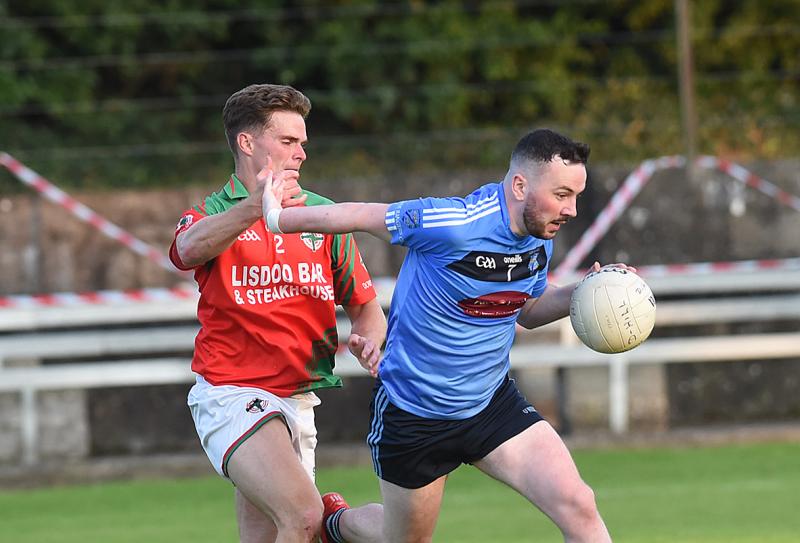 Wolfe Tones made a winning start to the Junior Championship when they defeated Stabannon Parnells at Louth Village on Monday evening.

It was Stabannon who were first on the scoreboard but the Tones soon settled into their rhythm and a point from Emmet Judge levelled the game.

Darren Weldon put the Drogheda men in front but missed the chance to extend the lead when he saw his penalty saved by Aidan Shevlin. However, that didn’t appear to disrupt the Tones as two points from Judge had his team 0-4 to 0-1 in front.

It got even better for his side soon after as Niall Smith set up Micheal Rafferty to tap the ball into an empty net.

As half time approached the Drogheda men continued to turn the screw and with the help of points from Dean Haggins and Sam Kelly they were 1-7 to 0-4 ahead when the half time whistle sounded.

Stabannon opened the second half with a point but the Tones were in no mood to allow their advantage to slip and they responded with points from Judge and Dwayne Leavy. Led by the scoring threat of Robbie Callaghan and David Cluskey, Parnells continued to battle to the end but three late points from Darren Weldon ensured his team secured a six-point win.

Na Piarsaigh turned in a strong second half performance as they got their Junior Championship campaign off to a winning start against Westerns at Darver on Monday night.

The Dundalk men found themselves two points down at the interval but a dominant second half display that included a goal from Alan McCartney saw them come out on top by six points.

It was no surprise that Tommy Durnin got the first point of the game and although the Dundalk men levelled soon after, the Westerns added the next two points through Patrick Kerley and Durnin.

Na Piarsaigh raised their game in the face of that challenge and scored four unanswered points to lead by two. However, the momentum swung once again as the Reaghstown added points from Durnin, John Murray and Jack Ogle to regain the lead before Ogle’s second point sent his team in leading by 0-7 to 0-5.

The Rock Road side came flying out to the blocks in the second half and their good attacking play was rewarded when they scored six of the next seven points to lead by 0-11 to 0-8.

Entering the closing stages the Westerns remained very much in contention as they trailed by just 0-13 to 0-10. However, Na Piarsaigh struck the decisive score in the dying moments when McCartney’s goal sealed the victory.

John Gallagher was the star of the show as he scored 2-6 to lead his side to victory over St Nicholas in the Junior Championship clash at Stabannon on Monday night.

A lively Mitchels full forward line opened the scoring with two points from John Gallagher before the Nicks pulled one back through Paudi Downey.

The Ballybailie side extended their lead when Gallagher found the back of the net but the Nicks quickly drew level at 1-2 each following a point from Jimmy Murray and a fine solo goal from Sam Reilly.

ollowing the water break the Mitchels extended their lead with goals from Gallagher and Gareth Kane along with a point from Trevor Matthews.

Even after the two goals conceded the Drogheda men didn't back down. A late penalty converted by Downey and a Brian Carter point kept them within touching distance at the break when trailing by 3-5 to 2-3.

St Nicholas started the second half better with Jimmy Murray to the fore. He added a point from play and it was his driving run that left the Mitchels no option but to foul him in the square, with the resulting penalty dispatched by Downey.

Either side of the water break John Mitchels added four unanswered points to leave the gap at five with time running out, with Kevin Gallagher and Andrew Bingham among the scorers. Both teams exchanged points, Reilly again for the Nicks, but even with mounting pressure in the final minutes the Nicks couldn't work the goal chance their perseverance deserved.

GLYDE RANGERS 4-21
DOWDALLSHILL 0-3
Glyde Rangers hopes of getting their hands on the Christy Bellew Cup got off to an impressive start as they eased past Dowdallshill in the opening game of the Junior Football Championship.
The Group 1 game at The Grove on Friday evening saw the Tallanstown side rarely troubled as they ran out comfortable winners.
Barry Sharkey enjoyed a profitable hour for Glyde as he finished with a personal tally of 2-5, while there were also goals for Aaron Devlin and Trevor O’Brien.
Prior to the game, there were genuine concerns within the ‘Hill camp about how the team might perform in light of the spate of injuries which have hit the panel in recent weeks. Those worries were well justified, and they were further compounded when just minutes into Friday night’s clash, they lost midfielder David Mc Crave with a hamstring injury.
Very quickly, the game moved away from the Dundalk side’s reach, with Glyde producing some excellent passages of play, and the scores to match.
Dion Conlon and Niall Sharkey also illustrated their ability in front of the posts as they helped Glyde take a firm grip on proceedings with first half scores. Barry Sharkey grabbed the first goal of the game in the opening period to ensure his team went in at the break with a commanding 1-10 to 0-1.
Although Dowdallshill managed to add three further points to their tally in the second period, it was another tough 30 minutes as the Tallanstown outfit continued to dominate.
Sharkey added his second goal while Devlin and O’Brien also raised green flags to seal victory.
GLYDE RANGERS: David Brennan; Gerald Farrell, Conor McCullagh, Gerard Bourton; Aaron Devlin 1-0, Cein Sheridan, Ultan Larney 0-2; Ciaran Sheridan 0-1, Brian Duffy 0-1; Niall Sharkey 0-5, Barry Brennan, Barry Sharkey 2-5; Conor Sheridan, Dion Conlon 0-4, Peter Duffy. Subs: Trevor O’Brien 1-2, Mark O’Brien 0-1, Dylan Kearney.
DOWDALLSHILL: Paudie Murray; Sean Duffy, Jack McGailey, Martin Og O’Brien; Stephen Murray, Paul Flynn, Dillon Curran (0-1); Justin Halley, David McCrave; Paddy McKenna, Peter Hughes (0-1), Luke O’Brien; Johnny Walsh, Darren Rogers, Emmet O’Brien. Subs: Conor O’Dorma (0-1) for D McCrave, Tommy Craig for S Murray, Adam Murtagh for M Og O’Brien and Ridwan Bodunrin for S Duffy.

SEAN MCDERMOTTS 0-17
CUCHULAINN GAELS 2-9
The Sean’s went into this match as slight favourites and indeed for most of the match they seemed to be in total control however two goals and a spirited final quarter by the Omeath outfit left the Ardee lads hanging on for dear life at the end.
The Sean’s led 0-8 to 0-4 at the break but it should have been much more as they spurned a couple of gilt edged goal chances.
Driven on by the excellent Declan Carroll at midfield they continued to press forward in the second half but a combination of poor passing and the wrong options left the door open for a Gaels comeback indeed in the final minute there was just the minimum between the sides but a well taken point by corner back Danny Commins gave the Sean’s the lift they needed to hold on.
Cian McDonald and Jordan Loye found the net for the Omeath side, while Michael McCabe finished with five points to give his side hope.
However, in the end their efforts fell just short as the McDermotts held out to get their campaign off to a winning start.
Aside from Carroll, the McDermotts had good performances from Danny Commins, Darren McEneaney, Lorcan Myles and Kevin McMahon.
SEAN MCDERMOTTS: Danny Reilly; Ian Corbally, Kieran McMahon, Niall McEneaney; Danny Commins 0-1, Darren McEneaney 0-1, David O’Neill; Declan Carroll, Emmett Duffy; Lorcan Myles 0-4, Peter Osborne 0-1, Cormac Walsh 0-3; Aaron Myles 0-2, Tony Kelly, Kevin McMahon 0-5. Subs: David McArdle, Danny McEneaney, Lorcan Ludden, Kevin McGahon, Sean McMahon.
CUCHULAINN GAELS: Ciaran Connolly; James Ward, John Morgan, Peter Morgan; Seamus McCabe 0-1, Martin Hynes, Michael McCabe 0-5; Brendan O’Hagan 0-2, Francis O’Hagan; Jordan Loye 1-0, Rammie Phillips 0-1, Martin Ward; Cian McDonald 1-0, Calum Fearon, John Paul Elmore. Subs: Niall King, Brendan Caldwell, Peter McCabe, Paddy O’Hanlon, Paul O’Hanlon.