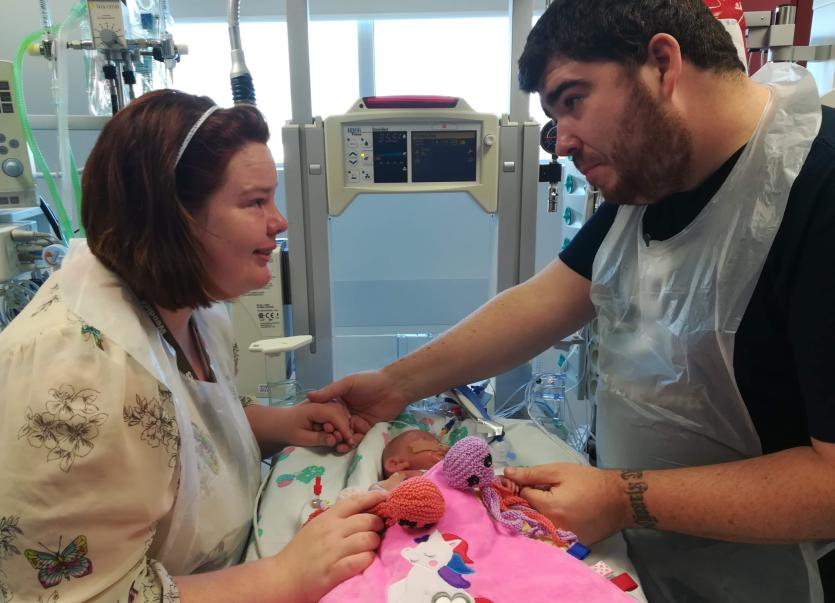 Dundalk resident Treasa Rushe-Carroll is embarking on a sponsored walk in memory of her daughter Catherine’s second birthday later this month, with all proceeds going to the Ronald McDonald House charity.A native of Termonfeckin but living with her husband Stephen in Dundalk, Treasa will complete a 14km sponsored walk - in honour of Catherine’s birthday on June 14 - and has so far raised just over €2,000 for the charity they hold close to their hearts.

Treasa took ill in June of 2018 while 24 weeks pregnant, and Catherine was delivered by emergency cesarian section at Lourdes Hospital. The hospital caters for premature babies from 32 weeks old and as such, Catherine was immediately transferred to the Coombe Hospital in Dublin before Treasa even had the opportunity to meet her daughter.At two weeks old, Catherine developed necrotizing enterocolitis, or NEC, which is a serious disease that affects the intestines of premature infants.

In the nine weeks that Catherine lived, Treasa and Stephen were told to say goodbye to their daughter on five separate occasions. Remarkably, ‘warrior princess’ Catherine as she is fondly referred to, miraculously pulled through each time. Doctors believed that surgery may help little Catherine and she was transferred to Crumlin Children’s Hospital.During their time in Dublin, Treasa and Stephen had been sleeping on floors and couches before renting short-term accommodation. Once Catherine was transferred to Crumlin, the couple stayed in the hospital’s parent accommodation for a week before the Ronald McDonald House came to their rescue.

“The Ronald McDonald House transformed everything for us,” explained Treasa. “All of a sudden we were just a five minute walk from her at all times, which was absolutely wonderful and a great sense of relief for us during such a tough time.

“We were able to have some semblance of like a routine and we were not worrying about where we were going to stay and not worry about meals as they were all provided. It took such a weight off of us,” said Treasa.

While at Crumlin Hospital, Catherine had four surgeries but sadly passed away on August 17, 2018. Not before over a dozen of her aunts, uncles and nephews got a chance to meet her, though. For Treasa’s birthday last year, she ran a Facebook fundraiser which raised €2,000 for the Ronald McDonald House. Last week, she saw that the charity are facing a massive deficit of €500,000 as they had to cancel almost of all of their fundraisers due to Covid-19.

“Unfortunately, Covid-19 hasn't stopped children being ill. There's still babies and families who need to stay there as we did. The Ronald McDonald House is more important than ever, so basically I saw the deficit and I decided I’d do a sponsored walk and I chose 14km  because Catherine’s birthday is June 14.

“Some friends of mine have offered to do kind of a relay, and my husband and nephew are going to do part of it with me too. They're all going to join me along the way. So if anyone can support me with even a euro or two, I'd be so grateful,” finished Catherine.

Treasa has launched a Facebook fundraiser HERE and a GoFundMe page: