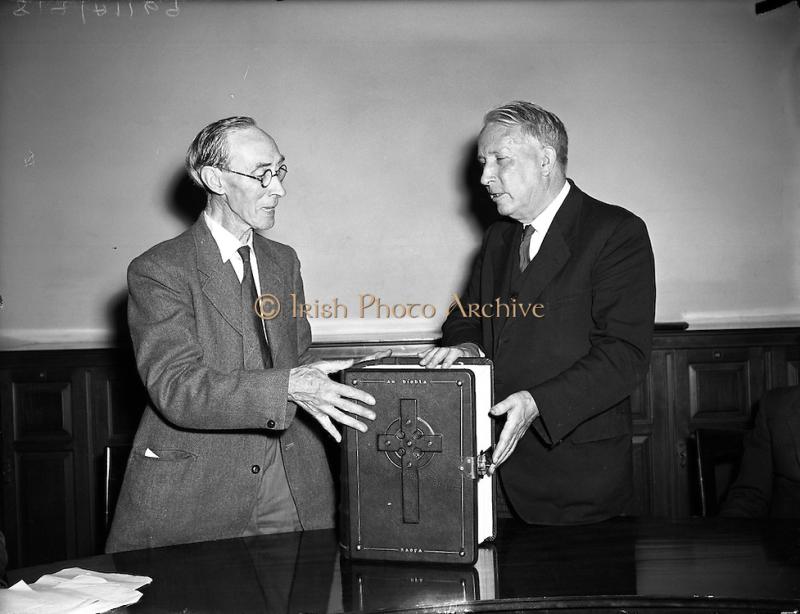 In the year 1981, the late and much lamented, Pat O’Neill, from Knockbridge, researched and published a book which he titled, ‘The Forgotten Man’. This was the name Pat attributed to one of Dundalk’s most famous sons, ‘Peadar O Dubhda’, Peadar O’Dowd, whose family lived in Castletown.

The list of Peadar O’Dowd’s achievements, and contribution to the town of Dundalk, and far beyond, should have ensured his name lived forever in the history of this whole area. So why the title ‘The Forgotten Man’ and why does his name not figure prominently in the history of Dundalk?

Perhaps these questions will be researched in time by historians and answers sought. Was it his 30-odd years of battle with the Catholic Church and his attempts to have Irish take its place in the liturgy of the Church? Was it his disdain for the young priests emerging from Maynooth? Peadar stated that he was not anti-clerical, but anti-Maynooth. He stated the Maynooth was a college with a charter from Queen Victoria to get the ‘Irish’ out. Prophetic, indeed.

For whatever reason his great work in translating the Bible into Irish over a period of 12 years, from 1943 until 1955, has never been properly recognised in Dundalk. On July 13, 1955, he presented the Bible to the Irish nation in the Dáil and was feted by the then Taoiseach Mr Costello. It has been on display in the National Library in Dublin ever since along with other works of Peadar. He received a letter of congratulations from the then Papal Nuncio, Albert Lavame. But not a word from the local Catholic Church. Is this the reason Pat O’Neill chose to title his work ‘The Forgotten Man’?

But Peadar was more than just this. He taught Irish in every school in Cooley, from Carlingford to Mullaghbuoy. He cycled to schools all over County Louth and South Armagh to teach Irish. He cycled to Ranafast every year to teach Gaeilge when the Irish college founded by Pádraig Pearse in Omeath closed. He was chairman of Dundalk Urban Council for five years when he championed the cause of reducing electricity charges on the poor people of the town. He championed the cause of healthy diets for children during the epidemic of Tuberculosis which devastated the area. As chairman of the Council he was instrumental in getting four housing estates in Dundalk, each named in Irish, Cluan Enda, Pearse Park, Muirtheimhne and Ard Easmuinn.

Peadar himself painted the names and addresses, in Irish, of over 200 farmers in Cooley in 1909 as the police had threatened to prosecute any person whose name was in Irish. Pádraig Pearse was the acting solicitor.

He composed the march that was used in the 1957 All-Ireland in which Louth defeated Cork. He had his own radio programme on Radio Éireann for 35 years where he sang, played the violin and piano for children’s nursery rhymes. Remember the fuss over Gay Byrne and Pat Kenny?

The lists are too numerous to mention them all. So why is there not a great recognition of this remarkable Gael in Ireland, never mind Dundalk?

Why is there not a monument other than a place on the wall outside the Gaelic League and a room in the town hall in his memory?

Why, then, oh why, has his grave, his resting place, been so neglected in Dowdallshill graveyard? There, his remains lie, along with his entire family 11 siblings and his parents. Two of his brothers were patriots in the fight for Irish Freedom. Dick, who lived beside Hanratty’s Garage on Castletown Road, was known as the best ‘dispatch rider’ during the struggles of the time and his younger brother, Eoghan (Oglaigh) was a founder member of Clan na nGael club and the man credited with naming the club.

I was ashamed, angry and embarrassed when I came upon their grave and have undertaken to have it restored and a proper burial place of honour and respect for great Irish patriots. And especially for Peadar O’Dowd, who, indeed, proved that ‘the pen is mightier than the sword’.

As for Dundalk, well, the year 2021 marks the 50th anniversary of his death in 1971. This ‘Forgotten Man; must be ‘always remembered’ and the people of Dundalk have the right to honour and give recognition to the best of them all.

A fund will be set-up to help with the grave restoration and a proper and respectful celebration of Peadar O’Dowd. His great work, the translation of the Bible, should be available for the people of Dundalk, to view in the town hall or somewhere appropriate. No longer ‘The Forgotten Man’ but a man of honour and conviction, a Patriot.