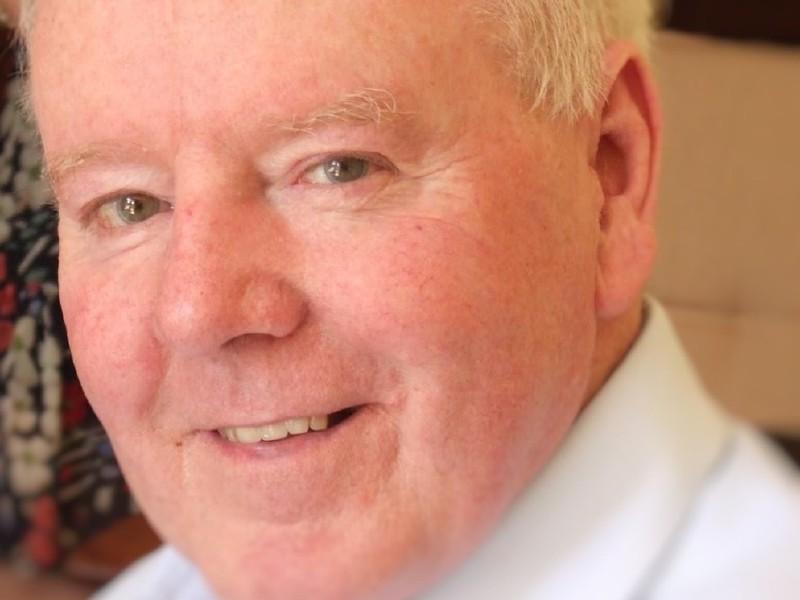 Gerry Dullaghan, Rockville, Rock Road, Blackrock, who passed away peacefully on the March 7, surrounded by his loving family in the dedicated care of the Lourdes Hospital Drogheda, was a devoted husband, wonderful father, grandfather, son, brother and friend. Gerry was so kind and gentle, always had a smile and his hand out to greet.

Gerry was born on the 05th of August 1941 to Thomas and Kathleen Dullaghan, Dromiskin. He spent his early childhood in Dromiskin until the family moved to De La Salle Terrace, Dundalk, where Gerry received his education in the De La Salle boy’s school.

Gerry went on to hold several jobs including within Linencare and subsequently spent most of his working life in Telecom Eireann as a telephonist, a job of connecting people together which he much enjoyed and was very dedicated to. He also loved to be involved in organizing the social engagements within Telecom and organized many a get-together.

In his early years Gerry had a love of motorbikes and in later years of cars. He also had a great love of his two dogs, Tim and Kimble.

Gerry, after a few years of courtship married his wonderful wife Rose (nee Hamill) on the 06th of September 1969 in Blackrock church. They settled in Ashgrove in Bay Estate before moving to Blackrock. They had three children, Catriona, Paul and Rosemary who Gerry was devoted to.

Amongst Gerry’s passions in life was travel, whether it was a road-trip in the country or getting on a plane to a sunny destination. On travelling he would love to learn about the parts of the world he was visiting and often if there was a theme park he would be the first queuing for the roller-coaster. He had a great sense of adventure. He also loved to educate himself through reading and he was always keen to learn of the new technology of the time.

Gerry enjoyed good health until 2001 when he had a very debilitating stroke. He fought many battles in the years ahead but never complained and always had a smile for those around him. In the years to follow he was wonderfully cared for by his loving wife Rose and carers within his home environment. From early 2018 Gerry resided at Blackrock Abbey, in the devoted care of all the nursing and caring staff to whom his family are truly thankful. He enjoyed being there and was very content in his surroundings.

In these later times Gerry took great pleasure in listening to the radio and watching the T.V. After the stroke Gerry unfortunately lost his speech but kept his ability to sing, enjoying sing-songs at family occasions and with Patsy Breen twice weekly in Blackrock Abbey.

His family were touched by all the people from many parts of Gerry’s life who paid tribute to the wonderful person he was.

The funeral mass was a fitting tribute, celebrated by Fr. Padraig Keenan, who had often visited Gerry over the past 11 years in both his home and Blackrock Abbey Nursing Home. The beautiful music was very fittingly performed by Patsy Breen. Family members personalized the mass by lovingly contributing to the various roles. Symbols symbolizing Gerry’s life were brought to the altar by grandchildren Greta (a T.V. remote control), Carla (a radio), Isabella and Zara (a watch and a phone). Grandchildren Zac and Kaiya brought up the offertory gifts. Readings were given by daughters Catriona and Rosemary and prayers of the faithful were led by nieces Martha and Catherine.