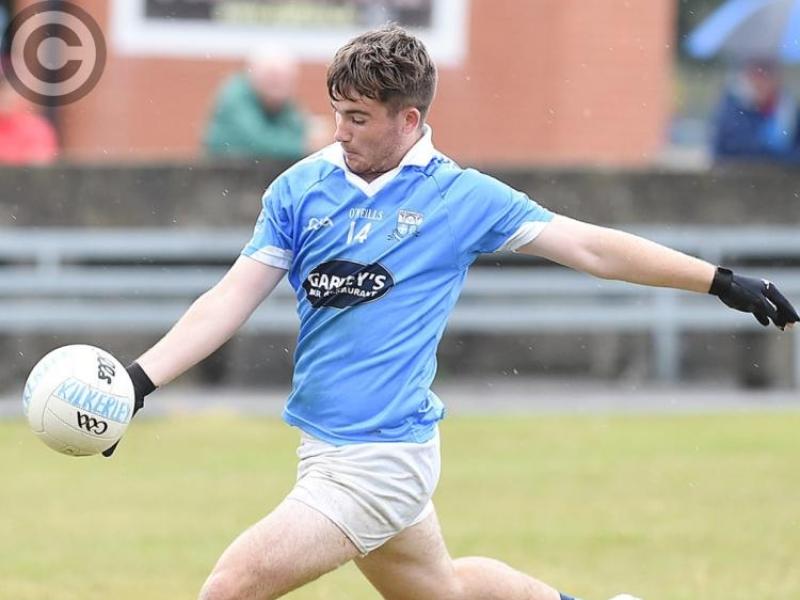 Newtown Blues overcame the challenge of St Marys on Tuesday night to make it through to the semi-final of the Paddy Sheelan Cup.

After a closely contested first half at Newfoundwell it was the hosts who took control of the game in the second half to run out worthy winners.

The Ardee men took the game to their opponents in the opening period and with some well-taken scores from Ronan Carroll they found themselves in a good position. However, the Blues kept in touch with the only goal from Declan McNamara to cut the gap to just 0-7 to 1-3 at the break.

The Drogheda side raised the tempo in the second half and with the Marys unable to sustain their challenge it was the Blues who went on to win by a comfortable eight points.

St Fechins came out on top in the quarter final of this Paddy Sheelan Cup clash at home to neighbours O Raghallaighs with Ronan Holcroft scoring eight points for his side on his return from inter-county duty.

The hosts opened the scoring with four unanswered points, from Sean Kerrisk, Niall Devlin and midfielders Joe Corrigan and Jamie McDonnell. The visitors got their first score on seven minutes with a point from a free and managed to clock up three more in the first half (two more from frees) while a goal 23 minutes in kept them in contention. Meanwhile the home side, despite a number of wides, clocked up a further seven points to lead by 0-11 to 1-4 at half time.

The Fechins made changes in the second half and continued to find the target, while goalkeeper, Niall McDonnell made a number of saves to stave off a comeback from the visitors.

Lannleire advanced to the semi-final of the Kevin Mullen Shield following a four point win over Glen Emmets in Darver on Tuesday night.

The sides were level four points each at the interval with Lannleire forwards being the more wasteful with their scoring opportunities.

The Dunleer attack improved their accuracy in the second half and went on to win by eleven points to seven with Colin Murphy contributing five points for the winners, while Paul Doyle, Bob Murphy and Ian Mulroy also kicked important scores.

The margin may have been greater but for some good goalkeeping by Emmets No.1 Fergus Barnett, while Ronan Grufferty and Kealan O’Neill top-scored for the Tullyallen men with two points apiece.

Wolfe Tones made it into the semi-final of the Kevin Mullen Shield with a hard fought victory over a well drilled John Mitchels side at Darver on Wednesday night.

The Drogheda men started the brighter in the game scoring the three opening points as Patrick Fanning kicked two scores from play while Niall Smith notched the third from his left.

The second half began with both teams defending well and pressing when they had possession. The Tones scored the first, pushing their lead to three but the Mitchels would respond strong with four unanswered points, to take a one-point lead with 10 minutes to go.

Tones introduced a change to try and tip the balance in their favour, with Graham Fanning replacing his younger brother Patrick in midfield. It proved an inspired one as Graham brought freshness to the middle. He managed to break forward to set up a score for Chris Cudden, making it a drawn game.

The next score proved crucial as good work from Emmet Judge allowed Jamie McCormack to score the only goal of the game.

The Mitchels fought to the end but could only manage to add one more point to their tally as the Drogheda side held out for victory.

Nh Malachi joined Lannleire and Wolfe Tones in the semi-finals of the Kevin Mullen Shield thanks to a seven-point win over Westerns on Tuesday night.

The game in Darver saw second half goals from Jamie Kelly and Keelan O’Neill prove decisive as the Courtbane men deservedly came out on top.

Shane Rogers was in fine scoring form on the night and he opened the scoring on two minutes. The Mals had to wait until the 13th minute before they added to their tally and with Donal Begley also on the mark they eased into a five point lead.

Paudi Moley had the first score of the second half for Nh Malachi and they were firmly in control when Kelly scored the first goal of the game on 38 minutes.

Conlon added a second goal on 26 minutes and although Stephen Boylan hit the net for the Westerns late on it was the Malachis who booked their place in the last four.