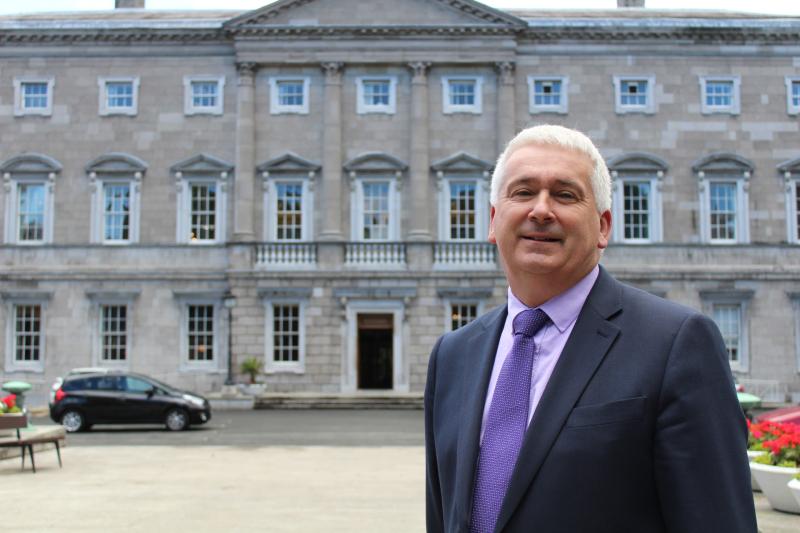 Louth Fianna Fáil TD Declan Breathnach has said that the party's success in winning three seats in Dundalk-Carlingford in the local elections was “superb”. Deputy Breathnach spoke to the Dundalk Democrat's Donard McCabe at the end of the Count at the Redeemer Resource Centre, where he shared his views on the party's performance across the county in the election.

“We are back to where we were eight years ago”, says Breathnach adding that the party's success in winning seven seats overall in Louth will have a real impact on Louth County Council.

“I have to say the vote in the [Dundalk-] Carlingford electoral area, electing three is a superb vote” he continued. “Over 35% of the electorate were for Fianna Fail and I think I’d like to thank them for that.”

“In Dundalk Rural, [the success] of both Liam Reilly and Emma Coffey is testament to both, Emma’s hard work having been co-opted to take my seat after being elected to Dail Eireann, but equally was a major challenge for Liam Reilly where Dromiskin was moved into the Dundalk Rural area. Ultimately he had a great decision to make around whether he would stay in his own electoral area of Ardee.

“Obviously the natural thing to do was to follow his Dromiskin electorate which he had worked so hard for, so it was a great achievement for him to have raked up the votes that he did in Dundalk South, and I wish him and Emma well in that respect.

“In relation to Ardee, again we’ve had a great day in that John Sheridan put in a huge campaign. It was a great campaign of cooperation between both John and Fintan Malone.

“I would like to pay a huge compliment to both of them, but equally Fintan Malone’s loyalty, not just to party, but to the electorate around Ardee all over the years is either testament to the fact that he could squeak through here and failing that, his vote which is very close to being elected Is a reflection of his diligence to the people of Ardee.”

Fintan Malone failed to get elected in the end, with Hugh D Conlan taking the last seat.

“I’ll tell you a little anecdote about the loyalty to people that has been shown by Fintan Malone, in that a man who works nights in Navan Mines at least two days a week, would be at my office shortly after 8 o’clock in the morning with issues around the people of Ardee, and if not at the office the other three days he will be on the phone to the office with issues. I think that’s testament to public representation not just about themselves but about representing people.”

Moving on to Drogheda, Breathnach was practical in his outlook on the party’s success in the region.

“Delighted to see James Byrne replace his dad who has served loyally on Louth County Council for many years. It’s a disappointing result in Drogheda Rural in that our two candidates, Declan power and Richard Cooney didn’t succeed.

"We have a lot of work to do in Drogheda Rural and indeed in Drogheda Urban where our percentage vote is not what it should be and I look forward to working with James Byrne to try and bring the same fortunes that we’ve got in both Dundalk South and Dundalk Carlingford, and  hopefully we can build on this current success, but not to rest on our laurels because ultimately for me the stronger the organization is right across the county is the better.”

“Finally I have to pay a huge tribute to anyone who put their names forward for election. I think it’s not an easy task, people think politicians have an easy time.

“I think you’ve seen it there in the support from family people of all parties who go out canvassing door in door out for the last, I suppose two months, but more importantly [I want] to commiserate with those who didn’t get elected”, the Louth TD concluded.