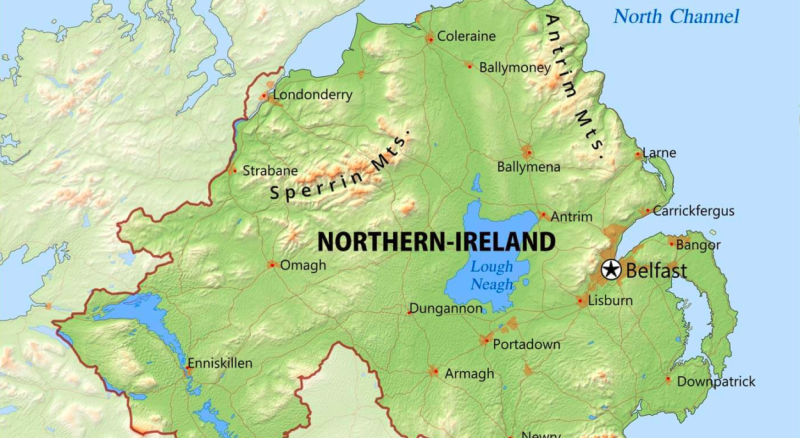 By some distance I was one of the younger heads in the audience on Thursday night at the assembly hall in St Vincent's school on Seatown Place. And such a pity that more young(er) people were not there that evening.

We were all present to take in a talk by the acclaimed UCD professor Diarmuid Ferriter on the history of the border and the politics surrounding it since partition was drawn up and enforced in 1921.

It was a fascinating evening. Ferriter, speaking for well over an hour, barely stopped to catch a breath and never once slurred a word or lost his razor sharp train of thought.

For those of us lucky enough to be in the audience it was an eye-opening insight into just how much partition and the border has shaped this island for nearly a century now.

And, in case it wasn't self-evident, it is still having a profound impact on the very shape and future of both the UK and the EU, given the current Brexit debacle.

Northern Ireland, and its creation as an entity of the UK, was never supposed to be a long-term proposition to solving the head-scratching "Irish Question". Neither Westminster nor Dublin, nor probably Belfast, saw it as lasting solution. It was supposed to be a start towards a more unified state of Ireland. Which has not come to pass over the past 100 years since.

From listening to Ferriter, it is clear that Michael Collins, upon agreeing to partition, saw it as an initial way of halting hostilities, before diplomacy and dialogue would, almost inevitably, rub away the border and bring the country back together by peaceful means.

If only it were that simple.

On the night, Ferriter said that Irish unity became a more distinct possibility in his eyes on the evening the UK voted to leave the EU back in 2016. Why?

Because it would at long last throw attention back to the forgotten parcel of land known as Ulster. A land which London viewed with chilly detachment and a land which it felt was neither here nor there - "not us, nor them".

Dublin, over the years, has not exactly been accommodating to Northern Ireland and the chance of unification either. Ferriter recounted the humourous story of former Taoiseach Jack Lynch being asked what he would do if he were offered Northern Ireland in the morning - his response? "I'd faint". Such is the remove felt towards Ulster. Such is the awkwardness of finding a solution which could satisfy all sides.

Brexit has thrown the Irish Question and the border into sharp relief once again.

The irony that this small province has now become the defining stalling point over such a huge geo-political crisis as Brexit, will not be lost on anyone interested in Irish history, and also its future.

The UK's long-standing indifference to Ulster has come back to bite them in the posterior. Whatever the outcome of Brexit, which will occur in some way shape or form, the massive levels of post-Troubles EU funding (estimated to be in or around €2.4bn) will cease. And then it will be on London to inject further, substantive funding, into the province.

One wonders if Westminster actually thought of that when they proposed a referendum on leaving the EU. If history has taught us one thing about Northern Ireland and the UK's feelings on it, the answer to that would probably be a shrug of the shoulders and a rare squinted glance across the Irish Sea at a land they feel indifferent to.