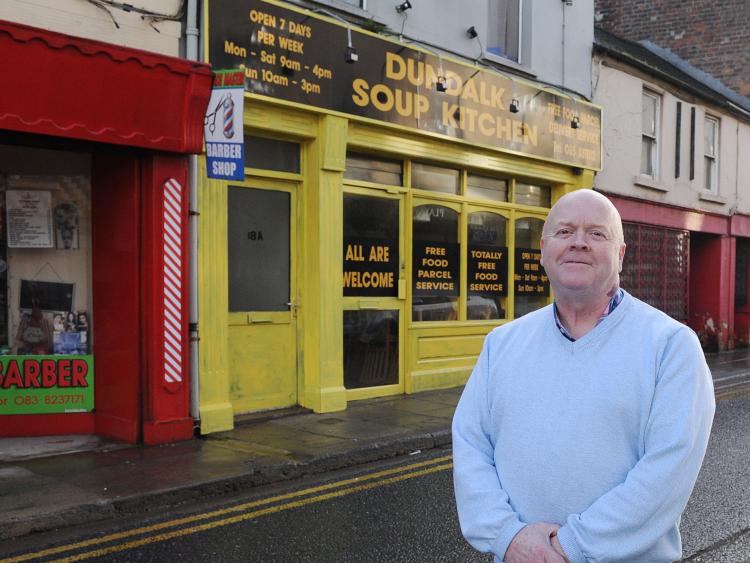 Mark O'Neill at the Soup Kitchen in Dundalk

Dundalk Soup Kitchen owner Mark O'Neill has vowed to hand deliver food parcels to those in need across Dundalk during Christmas, despite the fact that his premises will not open its doors until the New Year.

Big-hearted Mark, who also runs soup kitchens in Navan, Drogheda, and Balbriggan says: “I won't see anybody go hungry this Christmas. If people ring me on 0858811112 I will deliver food parcels on Christmas Day and all over the Christmas period.” 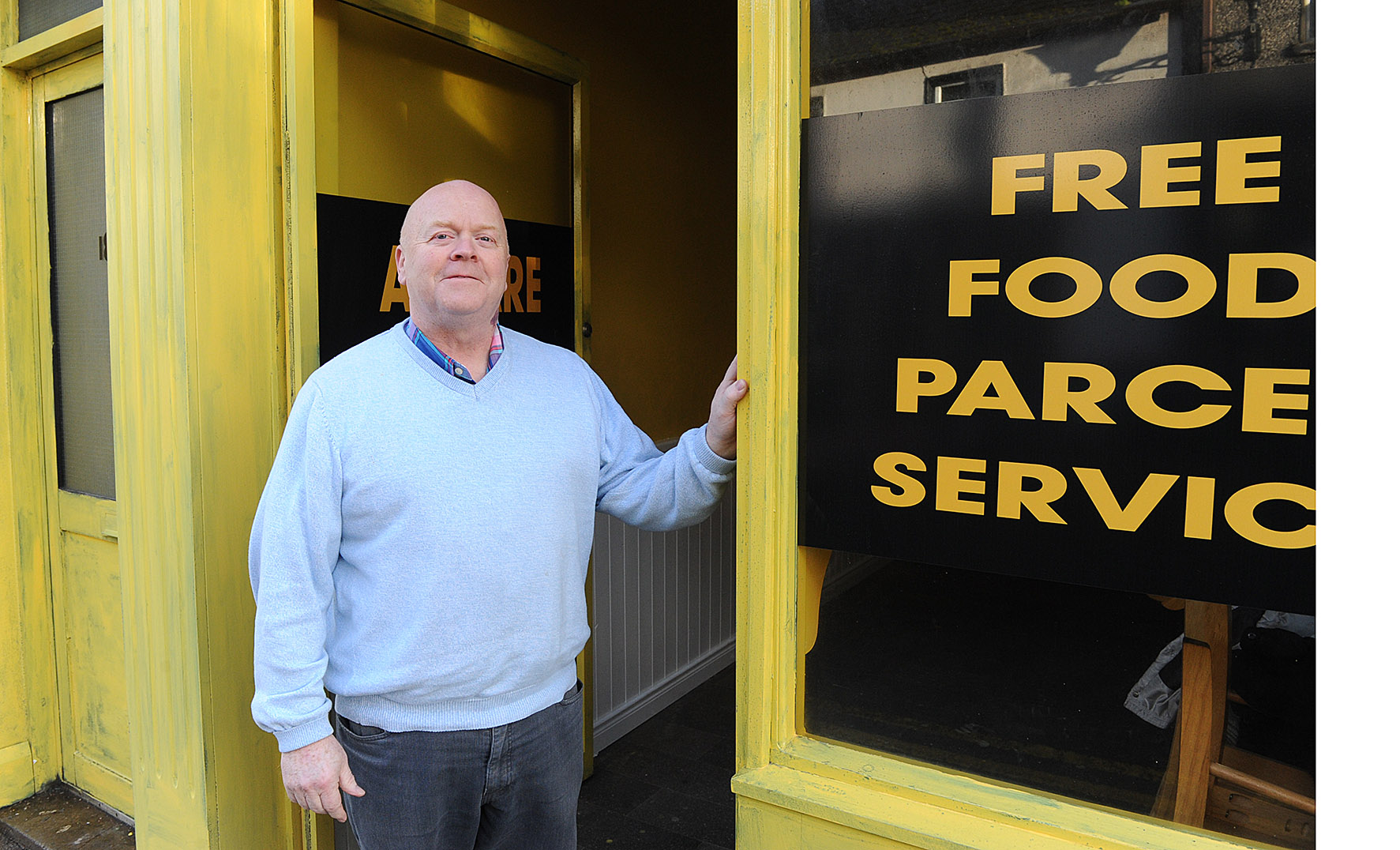 The food hampers contain about €160 worth of numerous ready-made dinners and sweet treats like biscuits and selection boxes which have been included for Christmas.

The charity is not expected to open its doors until the new year due to a delay with ESB technicians hooking up the electricity supply to the premises at 18 Bridge Street.

When operational they will serve free meals between the hours of 9am to 4pm Mondays to Saturdays and from 10am to 3pm on Sundays and provide a free food parcel to locals who are struggling to make ends meet.

Mr O'Neill says: “There is a huge demand. We have delivered around 170 hampers to people in Dundalk so far and we are expecting calls from many more people.”

Mark adds: “It's a bit of a disaster that the ESB can't get this sorted before Christmas as we had planned, but I'll still be out delivering hampers during the Christmas period.”

The brand new charity is one of four run by Cavan man Mark O'Neill which have been operating for the last three years in Navan, Drogheda and Balbriggan to meet the demands of the many people living across Ireland who can't afford to feed themselves and their families.

The purpose of the charity is simple - to provide a hot meal in a warm, safe and friendly environment and help restore a bit of dignity to the person in need, as well as sending out food hampers.

Remarkably, the charity doesn't receive any government funding and relies solely on the goodwill of people in the local communities.

“We rely solely on the goodwill of people in the local communities. We get no government grants.”

Mark and the volunteers are clearly eager and excited to get started in their new premises. He says: “We've been trying to get into Dundalk for the last three years. A lot of places that were offered to us were on the main streets in the town. We wanted a space that would be discreet - if people need to use our service we want them to be able to do so in privacy. Bridge Street is ideal.”

And the charity’s message seems to be loud and clear: “Everyone is welcome.” Mark explains: “Some people don't understand that our service is completely free, you don't need to pay a cent to come into us. That's the message we're trying to get across.

“We want to give people the full restaurant experience so that people can keep that piece of dignity intact. A few years ago the person might have enjoyed going out to a restaurant and ordering food but they might not have the funds now. You don't have to have anything in your pocket to dine with us.” 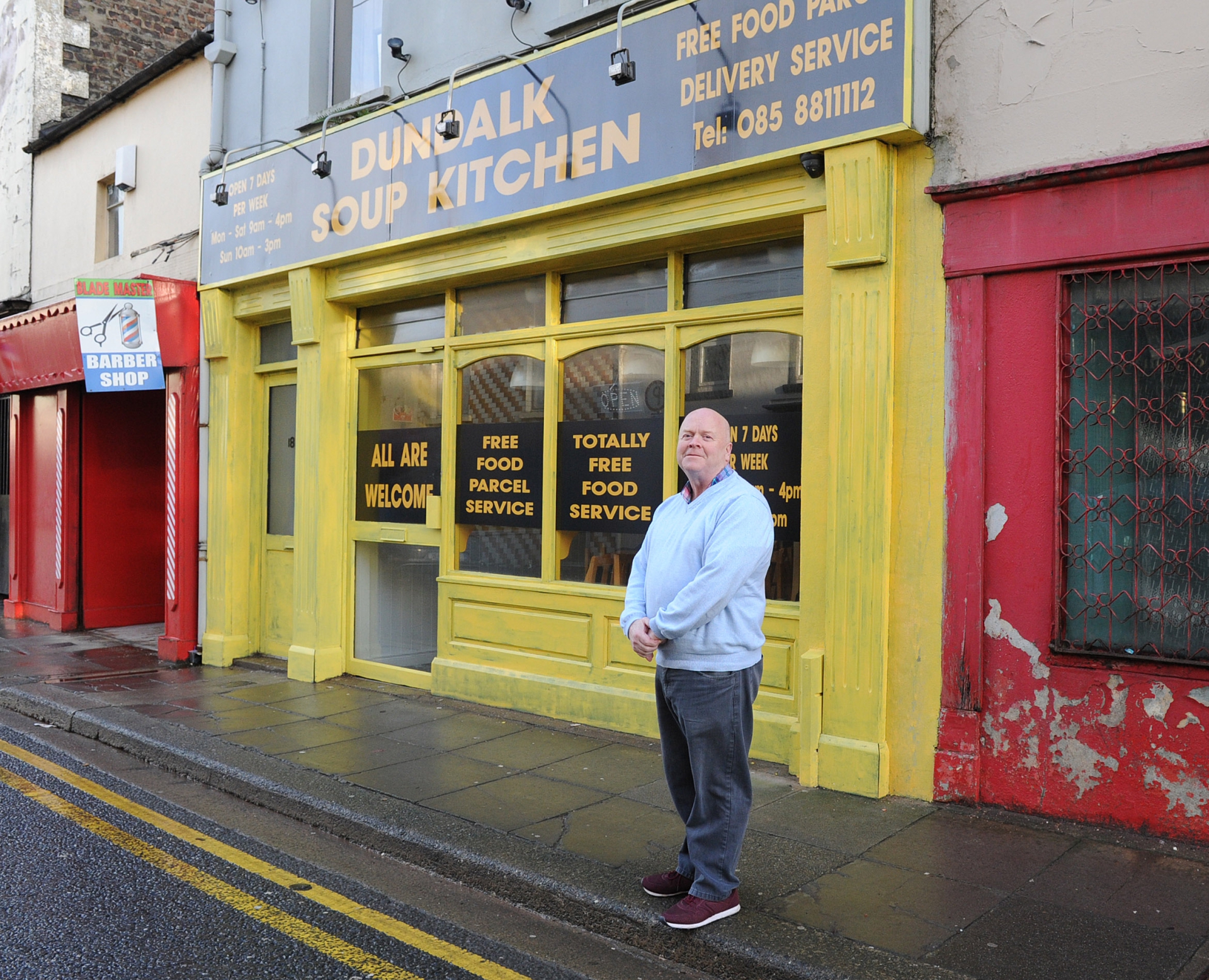 Practically speaking, Mark and the volunteers will be serving up breakfast, dinner and coffees and soups in the afternoons.
Mr O'Neill says: “In the mornings, up to about 12pm, we serve a full Irish breakfast, cereals, a boiled egg, and toast - whatever people ask for we can make it. In the afternoons we serve up a choice of dinners - everything from chicken breast, cottage pie, lasagne to fish and chips. People are also welcome to call in for an evening coffee and sandwiches. We will accommodate people whatever time they come in.”

Mark says that from his experience most of the service users “would be coming in every day” and are made up of a mixture of individuals who are sleeping rough and people who are living alone and need the company.

He adds: “At this time of the year we would get a lot of the older generation coming in who can't afford to heat their home and eat too.”

One thing is clear - there is a huge demand for their service already. Mark says: “Since we announced that we would be providing this service in Dundalk we have been inundated with people requesting food hampers. We've sent out about 170 so far (since Friday, December 21) and the business hasn't even opened yet! We estimate that figure will grow over Christmas. There is a huge demand.

“The food hampers contain about €160 worth of ready-made dinners such as cottage pies, stews, curries as well as cereal, porridge, and a few sweet treats like sweets, biscuits and selection boxes thrown in just for Christmas.”

Mark continues: “Everyone is welcome to use our service. Some people might say a free service like this is open to being abused, but from my experience, people don't ring up unless they're really in need. We want to open during the day and work hand in hand with other charities in Dundalk such as St Patrick's Parish soup kitchen, who do a fantastic job.

“At the end of the day, the most important thing is our service users. We want people to feel warm, feel welcome and feel like they are spoken to and treated nicely.”

Mark adds: “It's overwhelming the number of people who want to help out. We have 15 to 20 volunteers currently.”
The charity owner also praised local lads Niall McEvoy, Adam Coburn and Eamon Bishop for their hard work in setting up a clothes rail for people to drop off winter coats at a specially-designed rail in Dundalk Soup Kitchen for those in need. Please note that until the premises is opened, Niall McEvoy can be contacted via Facebook to facilitate coat donations.

Speaking to the Democrat Niall said: “The response has been outstanding so far. It's heart-warming to see parents bring kids around to donate coats before Christmas, to remind kids and parents alike that you get the same feeling from giving, as you do from receiving. It's proof that anyone and everyone can make a difference.”

For more information about Dundalk Soup Kitchen phone 085 811112 or call into 18 Bridge Street when the premises opens in the New Year.