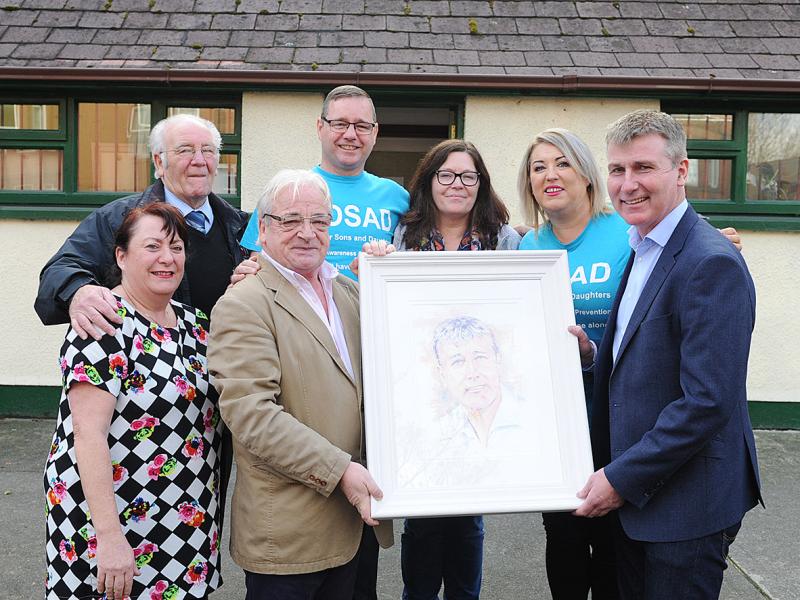 Former Dundalk FC manager Stephen Kenny was presented with a painting by members of local suicide prevention charity SOSAD (Save Our Sons and Daughters) last week.

The painting, by local artist Jessie Branton, was part of SOSAD's efforts to honour Kenny for his continued patronage of the organisation since he became the Lilywhite’s manager in late 2012. Spokesperson Gerry Duffy, praised Stephen for his help in raising the profile of the counselling and support service over the years. He also made reference to Stephen's quiet way of going about it.

"His humility is shocking", said Mr Duffy at SOSAD's office on Jocelyn Street last Wednesday, "I was sworn to secrecy (about his work) and I outed him last night on FB!” 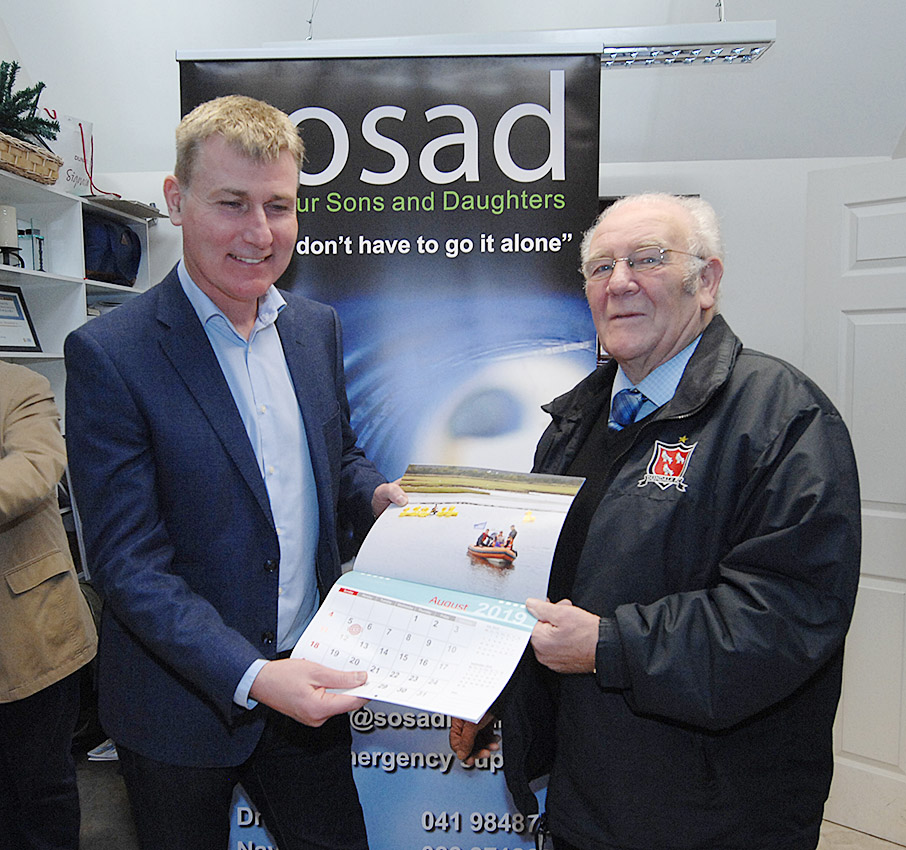 He continued: "We couldn't let this moment pass. We are here to honour him in a small way. One of the ways he associates himself with SOSAD is the Duck Race (an annual fundraiser that takes place on the Castletown River). Stephen starts it."

An initial presentation of a calendar produced by a local photographer was made to Mr Kenny.

Gerry added: "Darran Rafferty has made up a calendar of photos that were taken on the Navvy Bank and there is a nice striking one of Stephen."

Also present was local man Gerry Curtis, who has devoted time to fundraise for SOSAD over the years.

"Gerry Curtis is a Dundalk fan", explained Gerry Duffy, "but he has been a very good friend of SOSAD and he has helped us to raise funds and he presented us with a cheque last year for €3200.

"It's people like Gerry Curtis and all the people in this town that keep us going. We do not receive one cent from government."
Speaking to The Democrat after the presentation of the painting, the new Ireland U21 boss was quick to laud the efforts of the volunteers at the centre.

"They provide a brilliant service in that regard. I had no hesitation in getting involved. I think it's really about volunteerism and people giving up their time to try and save other people's lives. 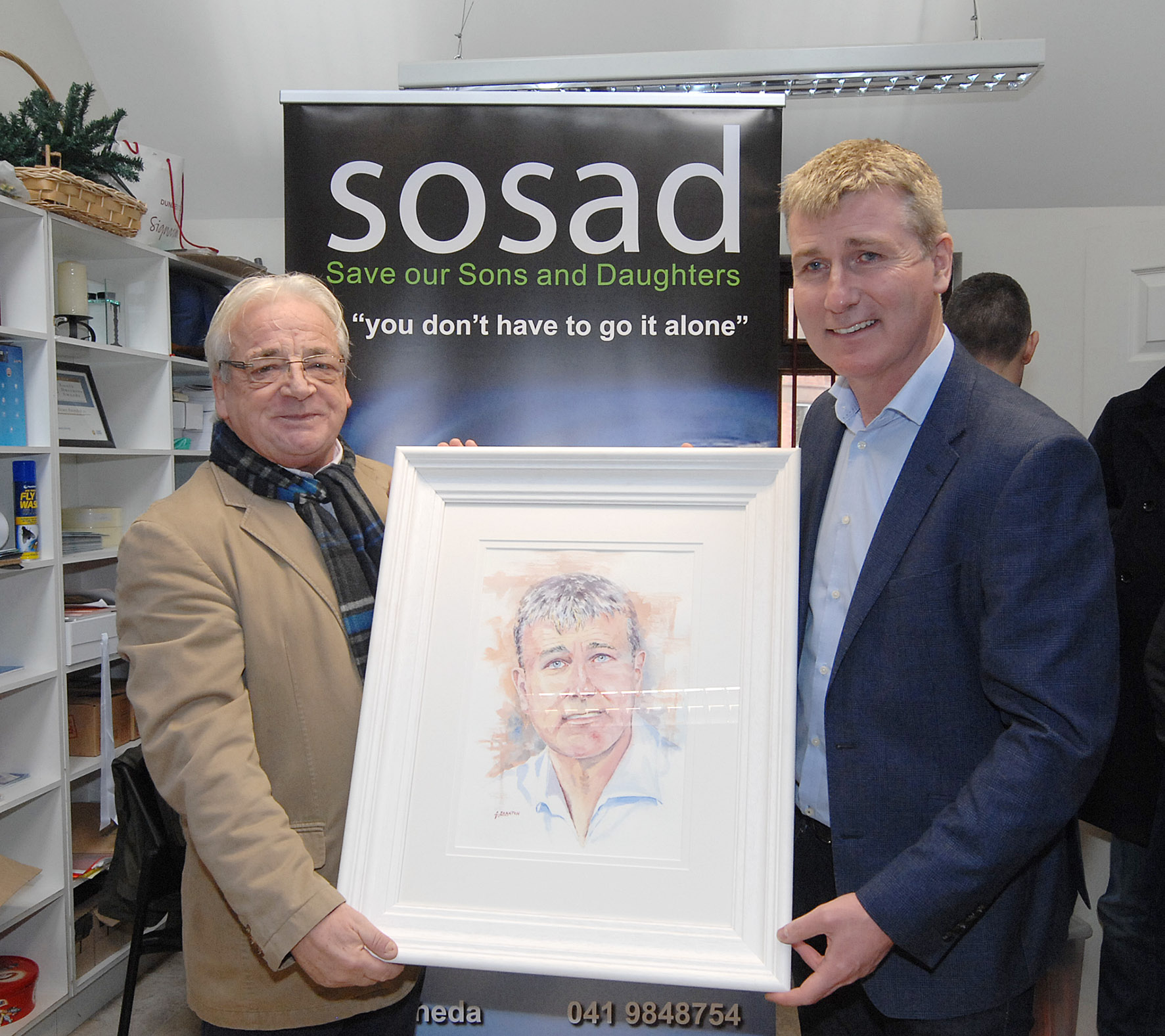 "I don't do that much", he added, "Really it's about people coming in here every day and what they do and the fundraising element. The most difficult job is a volunteer fundraising for a charity.

"It's a thankless job to have the determination to give your time to do that, to fundraise, to really help a place like this become a refuge. If it saves one life it's a massive success. But it has saved many lives."

Stephen went on to explain the greater issue of suicide in Ireland, but also the positive impact SOSAD and other similar services have had on people in need.

"Economic circumstances have improved for a certain cohort of people, but not people that are on the margins obviously”, he added.

"That's one of the facets (for a decrease), but the main reason has been the emergence of volunteers trying to raise awareness, and education in relation to suicide and then (there's) the counselling.

"This is an example of the value of community. This was a derelict building and obviously they've re-done it and done some brilliant work on it.

He added: "Sometimes people just need someone to speak to. A lot of suicides are in a fit of pique, some aren't, some are planned long-term. But (for) some people they've had a few drinks and it's at a moment they just need to speak to somebody."

Reflecting on the portrait painting of himself, Stephen smiled and said he was surprised by it.

"I didn't know it was coming. When you're getting a photograph taken with volunteers and a painting of yourself it can appear a bit vain, but I didn't know I was getting the painting.

"Obviously the artist has put in tremendous effort and I'll let my daughter judge it, she's the artist!

"The whole idea is to get coverage for SOSAD".