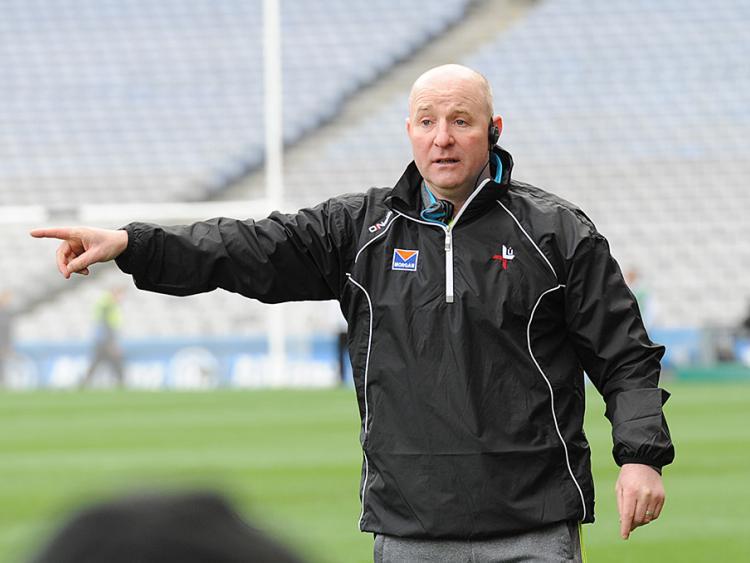 Colin Kelly was, in fact, completing a family treble when he collected for the first time

Irreverent? No, Paddy Clarke would understand, maybe even approve not to mention encourage. The late Paddy’s removal was in Drogheda on Wednesday last and you could clearly classify it as a ‘football’ funeral, many from today’s and, especially, yesterday’s playing fields generously contributing to the huge crowd at the St Mary’s Church Requiem Mass and on the journey afterwards to Calvary Cemetery.

They were in groups dotted about the place, and when that’s the case the craic is never likely to be less than ninety.

Invariably, a question or two will be thrown in, and such was the case on the steps of St Mary’s.

In his spell guiding the Louth senior team for four years, leading from the late 1990s into the following decade, Paddy saw his charges win the All-Ireland “B” Championship as well as the Division Two league title. Nicky Malone captained the promotion-winning team, and the Dunleer man was in flying form in Drogheda as he regaled – and was regaled by – a collection of his former colleagues.

Away from the men of 2000, there was another smaller gathering, and here the questions were really flying. One of them has had me scanning what passes for my collection of records over the past few days, as well as digging deep into my memory bank.

How many father-and-son combinations have won Louth senior championship medals, one of our number wanted to know. (Throw that one Paddy Clarke’s way and if he didn’t spit out the answer he’d have it within a day or two.)

Colin Kelly was, in fact, completing a family treble when he collected for the first time. His grandfather, Larry McCormack, was a four-time winner with the famous Drogheda Tredaghs in the early part of the last century and added All-Ireland medals in 1910 and again two years later.

Sean and Paul McGee were on the Roche Emmets 1980 team; their father, Paddy, played in goals with Dundalk Gaels in 1952.

There are Stabannon Parnells’ winners from two different eras – Brian and Gerry and Brian Reynolds, Paddy and Pat and Mark Butterly, and Mickey and Michael Reynolds.

Former Co Board chairman, Terry Maher, kept goals when Oliver Plunketts won their one and only title in the historic year of ‘57; Turlough got his medal in the Newtown Blues colours. Johnny Duffy was still a teenager in Clan na Gael’s 1959 win; Brian was a wee bit older when he won with the same club. A colleague of Johnny’s, Sean Greene, saw his son, Ronan, add to the family collection.

Another of the Clans’ ’59 side, Tom McArdle, was following in the footsteps of his father, also named Tom, who, after winning a couple of medals in the mid-1920s, chaired the Castletown club for upwards on 40 years.

Two Michael Boyles won with Cooley Kickhams, and having also played with Cooley, Sean Boyle transferred to St Mary’s and also won there. Did Sean’s son, Adrian, make it on to the podium? That’s one for Paddy Lennon the next time I meet him.

Staying in Cooley: there must surely be a winning Thornton combination?

Back to Newtown Blues, and there’s Dessie and Jimmy Murray, and Danny and Donal Nugent. There might also be other Judge combinations. On to Dundalk: Paddy Mackin was in the Young Irelands colours in 1979, while Barry helped himself to a bit of the Sean O’Mahony’s glory a couple of years ago.

A winner with Cooley and Gaels, Vincie McArdle was there when his son, Eugene, featured on the Young Irelands’ ’79 panel, alongside Ciaran Burns, whose father, Leo, figured on previous winning Irelands’ teams. In Roche, the Emmets team of 1958 had Owen Joe Woods included, and when the Joe Ward Cup was regained 22 years later by the team in blue, Eugene, Paddy and Paul were on the panel.

The above is almost certainly not a complete list – anyone who can add to it is welcome to forward details to joebellurgan2014@yahoo.ie