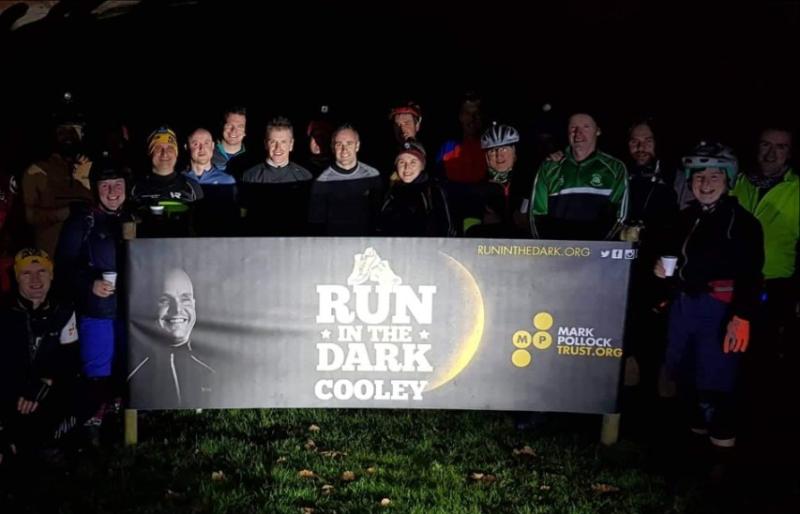 Instead of sitting by the fire and warming their toes, athletes from around the area came together in Cooley to bike and 'Run in the Dark' last Wednesday night.

Organiser Ciaran Gormley spoke to The Democrat about the supreme effort put in by all on the night:

"We were fortunate with the weather as it was mild enough and the rain held off thankfully.

"Everybody was well kitted-out and lit up like Christmas trees!

"The start/finish was under the Bush bridge and the route took everyone in the Rooskey road, up through the mountain gate across the Golyin, down to Glenmore and back to the Bush.

"Near the saddle we had a minute's silence and thought about our friends Gerry and Ed. They were fellow outdoor enthusiasts who sadly passed away early, but will not be forgotten."

Once the trek was at an end, everyone came together as the night stretched on, added Ciaran.

"When we got back to the Bush a good fire, food and hot drinks awaited. It kept the body thermostats up as everyone huddled and chatted under the bridge.

"Stories were told, songs were sung and craic was had as another year slips away into our memories," added Ciaran.

A total of €770 was raised by the athletes. This money goes to help the Mark Pollock, in his efforts to find a cure for paralysis.

The group would like to thank all who participated, including those that couldn’t, but still donated. Thanks were offered to Sandra and Hannah for organising the food and to Seamus for letting the group use the Bush amenity area. Big thanks to George and the Greenore Coastguard who provided cover on the mountain.