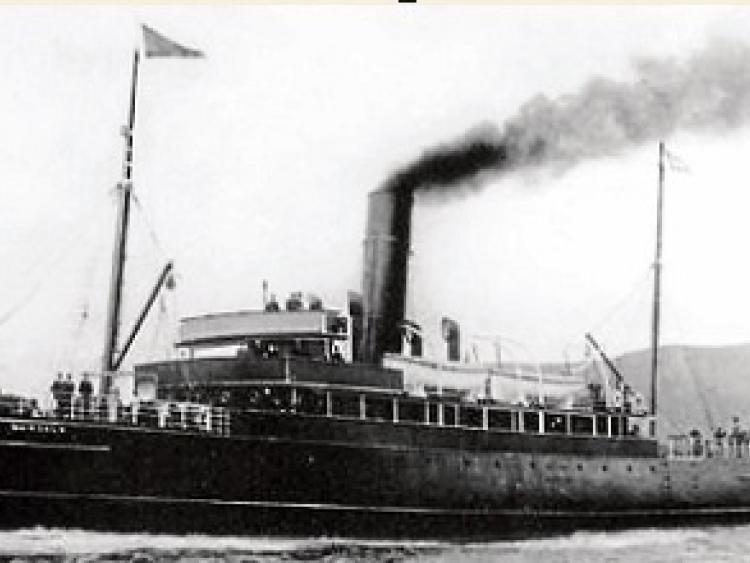 The S.S. Dundalk was torpedoed on 14th October 1918 just weeks before the end of World War 1. Twenty lives were lost and there were twelve survivors.

The ship T.S.S. Dundalk was built in Glasgow in 1899 at a cost of £40,000, as a flagship for the Dundalk and Newry Steampacket Company. She was too big for the Newry Canal and operated from Dundalk, she was 235 ft long powered by a triple expansion engine and could be encouraged to reach a speed of 16 knots.

Her main trade was in carrying cattle and produce from Dundalk to Liverpool and other goods on the return journey. She also carried passengers.

Her Captain was Hugh O’Neill, from Killowen, Co. Down and he was a very experience mariner. Each week during the war the S.S. Dundalk made the journey from Dundalk to Liverpool and back, in spite of all the dangers involved. There was considerable loss of shipping from attacks by German submarines in the Irish Sea particularly from 1917 onwards.

The S.S. Dundalk was a target of one such attack in December 1917. There were 52 shells fired at the steamer, one of which damaged a life boat, which was blown to pieces. Captain O’Neill adopted a zig zag course and smoke boxes were used . After about an hour and a half the “Dundalk” managed to make it safely to the Isle of Man.

The Captain and crew were commended for their bravery.

She left Liverpool at 5 pm on Monday 14th October and headed northwest on her regular course between Anglesey and the Isle of Man intending to reach the docks in Dundalk by early morning.

Shortly after 11pm she was attacked by a U boat without warning. Capt Hugh O’Neill was on the starboard side of the Bridge having just relieved the Mate John Higgins. The torpedo hit the S. S. Dundalk amidships on the port side and practically split the steamer in two.

She began to sink immediately; Timber and iron were blown into mid air and the survivors stated that they were blinded with ashes and cinders. The steamer went down head on in about three minutes.

The Captain was on the Bridge when the vessel sank. It is believed that a number of men working below deck were killed by the explosion while the others had not time to reach the deck.

The mate John Higgins (He was there in place of his brother James) and seaman Patrick Byrne succeeded in getting one of the life boats released from the derricks just as the Dundalk sank. Three others Frank Deery, Patrick Kearney, James Tuite, managed to get to this life boat and Kearney was injured in the effort. This life boat was badly damaged and nearly sinking.

Two of the gunners Alexander Ferguson and Timothy Connors were pulled from the water, Ferguson was very ill with flu and clad only in his underwear.

Another boat was also launched by the deck hands Pat Moonan,and Patrick McCourt. They pulled Thomas Fitzgerald, Hugh O’Neill, and John Mulqueen, from the water. Mulqueen was badly injured.

The submarine came to the surface as the men were being pulled from the water. It stayed for about 5 minutes but made no attempt to rescue the men. The submarine moved away and almost immediately, the S.S.Carlingford also came on the scene. It nearly ran over one of the lifeboats.

The men shouted and believed they received an answering call but the steamer didn’t stop. The actions of the crew of the S.S. Carlingford caused controversy in the town and led to families being split in the aftermath. It was a difficult dilemma for the S.S. Carlingford since the Admiralty instructions were quite clear.

“No ocean-going British merchant vessel is permitted to go to the assistance of a ship which has been torpedoed by a submarine” The subsequent telegram from Captain Hughes explains the actions of the Carlingford. “Master Hughes, S.S. Carlingford reports when in position 18 miles North by West of the Skerries at 23.45 pm October 14th, sighted 2 ships boats full of men.

After making an effort to pick up survivors, observed conning tower of submarine-effort abandoned and proceeded on voyage”

The men in the two lifeboats in the darkness lost sight of each other. The men were very cold and hungry. They had no food and very little water. The lifeboats were damaged and water had to baled throughout the night.

The next morning in one of the lifeboats Ferguson, the gunner who was sick, used a ompass to steer a course for the Welsh coast. The rudder of the boat was broken. They rowed all day.

In the evening they were spotted by a seaplane and shortly afterwards the trawler Stormcock picked them up and brought them to Holyhead.

The five men in the other lifeboat after 16 hours at sea were picked up by the S.S Douglas and brought to the Isle of Man.

Some of the men from both lifeboats were hospitalised.

Quite a number of the crew had been replacements for the regular crew. On 8th October eleven men were taken from the ship at Dundalk suffering from influenza. Substitutes had to be found for these men and also for Patrick Hanratty (Fireman) who was taken ashore in Liverpool and died there.

It was thought his coffin was on the S.S. Dundalk when she was torpedoed as this had been reported in one of the newspapers the following week.

This was not the case. Patrick Hanratty died in Liverpool on the 14th October, the day of the disaster and was buried in Ford Cemetery in Liverpool on 21st October. He was from the Point Road in Dundalk but was living in Liverpool with his wife and 7 children.

In Dundalk, Patrick Roddy died and was buried on the 13th October. He had a large family and had over twenty years’ service with the Company.

His family were included in the allocation of funding from the Dundalk Disaster Fund.

In Dundalk when the ship didn’t arrive as expected the families were very alarmed. It was some time before the news of the disaster reached the town. Because of the war there was an embargo on news and what could be published.

It was only when the survivors returned to Dundalk did the full story emerged.