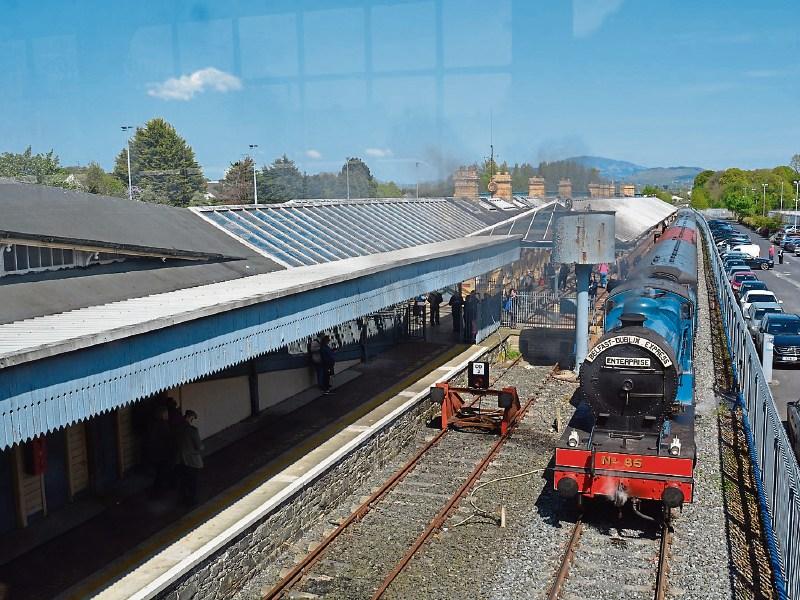 Dundalk Railway Heritage Society have chosen next Saturday, September 29, to celebrate an event that many Dundalk families recall as 'The End of the Line' for Dundalk as a Railway Town.

It is almost exactly 60 years to the day since the G.N.R. Locomotive Works at Ardee Road closed with 750 men receiving redundancy notices.

This is a bitter, sweet, memory for many Dundalk families and some may ask 'why bother to celebrate or even remember it at all'?

The answer was given me by an old Railway Works man some years ago when he remarked 'when we are gone, there will be nobody around who know as it was like to be part of that community!' I knew exactly what he was talking about because, although I had never worked for the railway myself, I had lived in the town where the railway was part of its very existence!

The story of the Dundalk Railway Works goes back more than 100 years prior to that closure in 1958. It begins with the coming of the railways to Dundalk during the 'Hungry Forties' of the nineteen hundreds.

The railway had saved Dundalk and its surrounding areas from the worst effects of the Great Famine and was a way of life and secure employment for many during times when much of the rest of the country were forced to emigrate to survive.

The Locomotive Works themselves had been constructed shortly after the earlier railway companies had joined together in 1875 to form the Great Northern Railway (Ireland) company. The idea was that Dundalk should become the hub of the railway network between the two cities of Dublin and Belfast.

For a time it worked and Dundalk became a centre of excellence for railway engineering skills and the economic prosperity of the town grew more rapidly than many other similar towns in the 32 counties of Ireland.

The dream came began to fade with the start of the Great War in Europe in 1914 and the subsequent events in Ireland which led to the setting up of the Free State and the creation of a Border between us and Northern Ireland. Even these events, however, did not bring about the end of railway engineering technology in Dundalk.

It was more the Second World War shortages of fuel and other materials began the final decay. For a short time after the war the railway companies north of the Border continued to enjoy a measure of prosperity.

The G.N.R. used the improvements in its revenues to invest in new rolling stock, ordering fifteen steam locomotives and a fleet of twenty railcars from the English firm AEC.

Another important innovation was the launching of the Enterprise Express between Dublin and Belfast in August 1947 which, in itself, brought some engineering work to Dundalk.

It could not last as the competition from the road freight service made the railways on both sides of the Border uneconomic and both Governments refused to continue to carry the burden of subsiding the railways.

Dundalk railway workers saw it coming and did their best to stem the tide, holding a great protest march throught the streets of Dundalk in which over one thousand G.N.R. employees took part in December of 1957. It was all in vain, however, as the railway company slid into liquidation which brought the closure of their Works in Dundalk.

It was not all bad news, however, as the skills which workers had learned at the Ardee Works served them well in obtaining work in other budding industries around the town and even abroad.

Many of them went to work for the booming automoblie industries in England and other engineering employment. Some got jobs at the nationalised C.I.E. railway works at Inchicore but this proved a great hardship as they had to be away from their homes in Dundalk for most of the week and they were not repaid for their travelling expenses.

To get back to the Railway Heritage Society's commemoration of the sixtieth anniversary, they had planned to hold a parade from the old works buildings but this proved impractical and they decided to settle for a photographic exhibition and lecture at the County Archives Centre at the old Gaol at the Crescent on Saturday afternoon.

This will be open from 2.30 pm but you should try to be there early as there is sure to be great interest in both.

The photographic exhibition in itself was a great achievement on the part to the Committee under Chairman Patsy Duffy. Much of these images of the past have been gathered by Brendan Harmon, Margart Mallon and Seamus Murphy.

They include many photographs and short films that may never have been seen in public previously.

It will afford old railway workers and their descendants an opportunity to get together over a cup of tea or coffee, to discuss the people who appear in them and may be forgotten to all but a few!

The lecture on the Closure, which is due to commence at 3 pm, will also be an event which should not be missed.

It will be delivered by Charles Friel, Belfast, one of Ireland's foremost railway historians who will be well known to many Dundalk steam railway enthusiasts.

He has previously conducted tours of the old Railway Works and delivered several lectures in Dundalk which had been highly regarded.

Mr. Friel also produced an excellent book which contains the memories of Dundalk people who were connected with the old railway system, launched in 2012.

He is currently working on a second volume. This book, called 'Across the Tracks', contains many historic photographs and maps.

A few copies are still available and will be on sale at next Saturday's Exhibition and Lecture.