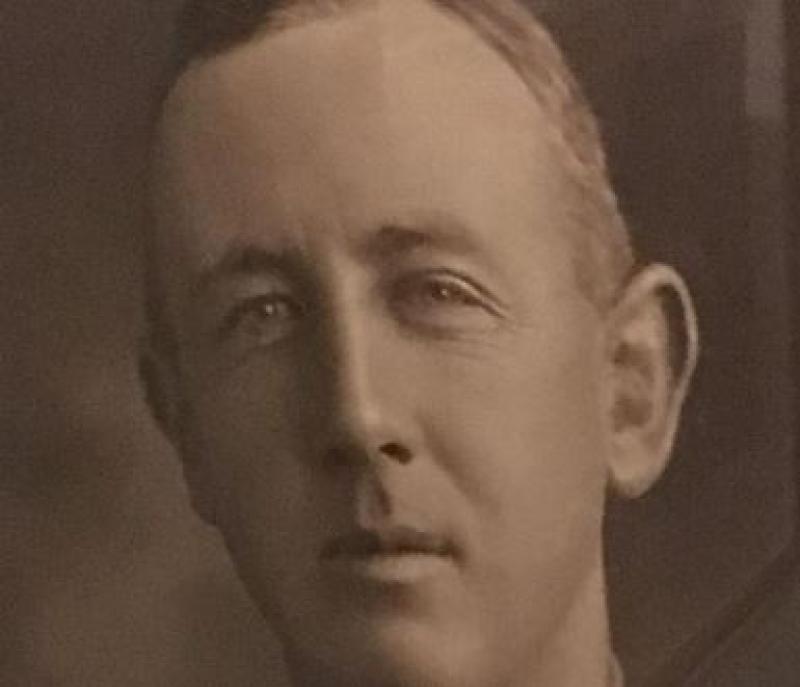 This year marks the one hundredth anniversary of the death of Captain John Carolan Brown, Military Cross and Bar, of Dundalk who was killed in action in France in 1918.

John, known as Jack, came from a prominent Dundalk business family.  He was the son of Robert Louden Brown and the grandson of Stephen Brown a merchant and mill owner Of Mill Street and Philipstown, Dundalk.

The mills at Philipstown were destroyed in a fire on October, 2, 1868.  Stephen Brown died suddenly less than two weeks later on October, 14, 1868.

Another son of Stephen’s, Thomas (1850-1912), took over the family business.  He was the first chairman of the Dundalk Club, Roden Place, Dundalk, which was founded in 1885.  The portrait of his nephew, Captain John Carolan Brown, hangs in the club premises to this day.

In 1875 Robert married Mary L. Carolan, the daughter of a merchant, Nicholas Carolan.  The Carolans had an extensive wine, spirit and grocery business based in Earl Street, Dundalk.

John Carolan Brown was the fourth of their seven children.  He was born on May, 31, 1884 in Annaskea, Dundalk. When the census of April, 1911 was taken he was a resident of Barrack Street, Dundalk and his occupation was recorded as “coal merchant”.

On the outbreak of World War 1 he joined the 4th Battalion, Connaught Rangers.  On June, 3, 1918 while attached to the Tank Corps, he was awarded the Military Cross for ‘conspicuous gallantry and devotion to duty while in command of a section of tanks..... He accompanied his tanks on foot under heavy machine-gun fire and enemy barrage.’

Jack, who was unmarried, was killed in action near Beaucourt-en- Santerre, Somme, France on August, 8, 1918, aged 34 years, and was interred in Beaucourt British Cemetery, Beaucourt-en-Santerre.

Thomas Gerard, having survived the war, worked as a medical doctor and surgeon in Dublin.  In December, 1935 while out game shooting with a fellow doctor in Rathconnor bog, County Roscommon, he was shot accidently in the leg by his companion.  He died in Roscommon hospital on December, 4, 1935. He was buried in St Patrick’s cemetery, Dowdallshill, Dundalk. The Celtic cross marking the Brown grave also commemorates his brother, John Carolan Brown.

Another brother Henry Joseph Brown (1887-1961), known as Harry, was a prominent hockey player who was capped twenty two times for Ireland, fifteen as captain.

He was a member of the Irish team that won a silver medal at the 1908 London Olympic Games, having been beaten in the final 8 – 1 by England.  This was the only team medal ever won by an Irish side. He was also an accomplished golfer and in 1918 was elected captain of Dundalk golf club.  He died in Dublin in February, 1961.