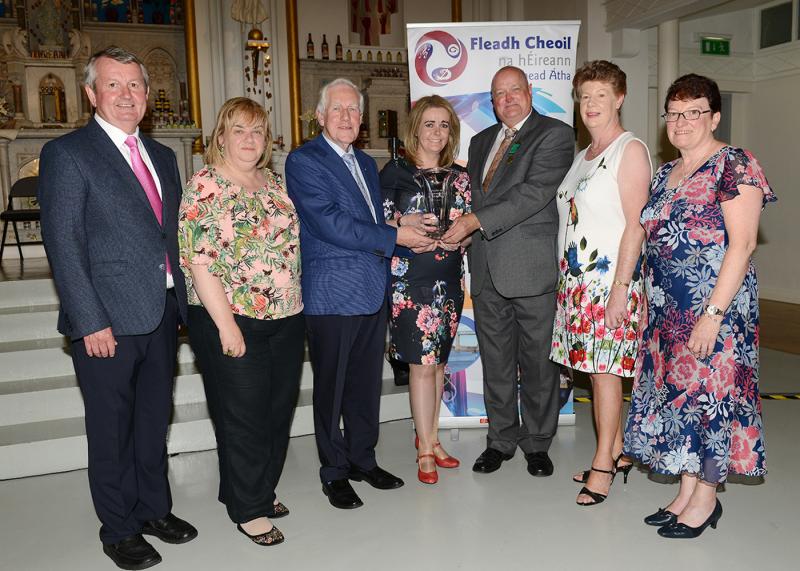 Adèle and DkIT student Ciara Brannigan led a team of volunteers who have been working throughout the summer to prepare a range of events that were attractive to all age groups and people with all levels of Irish. Sponsored by Foras na Gaeilge, these events included Irish language classes, family fun, storytelling and dancing.

Presiding over the launch in the Highlanes Gallery, Adèle noted the strong Irish language heritage in the region including the poets Peadar Ó Doirnín and Séamus Dall MacCurta and the important role of scholar Peadar Ó Dubhha. She performed a song in Irish with her husband Daithí Kearney, also a lecturer in music at DkIT.

The presentation to Adèle held further significance as she was a piano accordion student of the late Rory Kennedy. Best known in music circles as the leader of the Siamsa Céilí Band who won three All-Ireland titles in a row between 1967 and 1969, Rory was also prominent in Conradh na Gaeilge in Dundalk and was himself recognised for his role in promoting the Irish language by Cumann na Sagart.
Adèle presented a paper on Rory at the Ó Ghlúin go Glúin symposium in association with the Creative Arts Research Centre at the Fleadh on Friday and also performed for both the President, Michael D. Higgins, and the Taoiseach, Leo Varadkar, when they visited the Fleadh.

Seachtain na Gaeilge was an integral part of Fleadh Cheoil na hÉireann in Drogheda and all of the Irish language activities were very well attended. It is hoped that people will continue to incorporate the language into their everyday lives and planning will begin again soon for next year’s Fleadh in Drogheda.