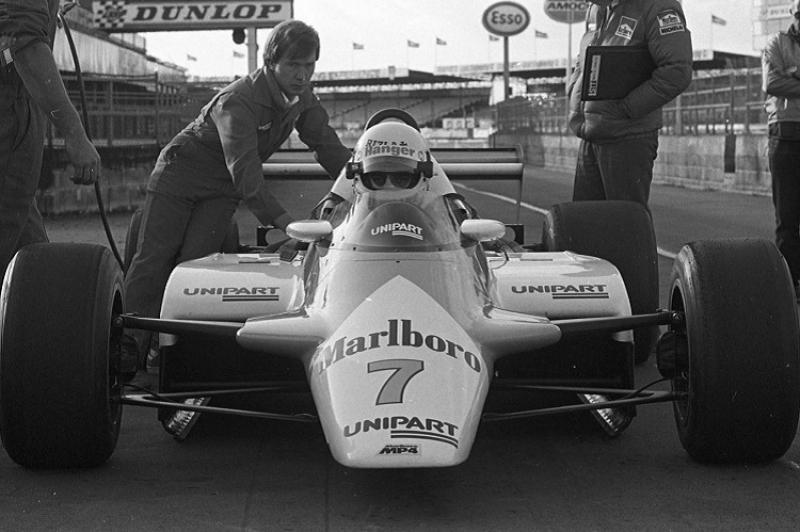 “Forget Schumacher and Senna. Tommy Byrne was the best of them all.” So says former F1 team boss and TV pundit Eddie Jordan.  From grasstracking Minis in Dundalk, via Mondello Park initially, Tommy incredibly made his way to F1 in just four short years.

On 18-19 August, in an event organised by Leo Nulty Promotions, Tommy Byrne returns to the circuit where he first cut his teeth in a FF1600, Mondello Park in County Kildare.

Mondello Park celebrates both its 50th Anniversary and the life of its late owner Martin Birrane at the event, which has many exciting attractions for both classic car and racecar fans- but this one tops them all.

Byrne will drive the iconic Hesketh F1 car in which James Hunt famously won his first F1 race at the 1975 Dutch Grand Prix. The car is now owned by Historic F1 racer James Hagan, who has formed a friendship with Byrne since meeting him recently.

Even better for race fans, it won’t be a demo. Far from it in fact, as the former British F3 Champion will compete against the regulars in the HSCC Derek Bell Trophy races- including F5000, F2 and Formula Atlantic cars.

Byrne sprung to fame once again just 10 years ago, despite having retired long before, when his “Crashed and Byrned” biography won a host of awards, including the William Hill Irish Sports Book of the Year in 2008. From this came the movie, which once again, was a huge success, only recently being awarded an IFTA here in Ireland.

One of Tommy’s most memorable moments, and there are many, was his famous McLaren test at Silverstone.

This was part of his prize for winning the British F3 series and not only did he eclipse the qualifying times of McLaren’s two drivers, Niki Lauda and John Watson, he also set the fastest ever normally aspirated engined F1 car recorded at the circuit.

Their new 308, which referred to the three-litre, eight-cylinder DFV engine that powered the car, was assembled by B.S. Fabrication Ltd. in Luton. When James Hunt first laid eyes on the car, he pronounced it simply “beautiful”. He was likewise impressed by the roomy cockpit, which had been tailored to fit his relatively large form!

The car has been beautifully restored and is now owned by sometime Historic F1 racer, James Hagan from Northern Ireland. Tommy Byrne had not raced in many years and recently returned to the cockpit at the Silverstone Classic to drive another of Hagan’s machines.

The event takes place on the Mondello International Circuit, as opposed to the National, which Tommy raced on before. Have no doubt doubt though, that the famous Hesketh will be at the sharp end of the field, when the Derek Bell Trophy series takes to the tarmac.

Tommy Byrne: “I am so excited to be back at Mondello Park where it all started for me 42 years ago.

"To drive James Hunt’s first F1 car is also a huge honour for me. I would like to thank James Hagan and Mondello Park for giving me this opportunity!”

There will also be races for Pre ’55 cars (including two E.R.A. machines from the UK), HRCA Historics, Future Classics, Classic Bikes as well as demonstrations from some of the Mondello Park Museum of Motorsport collection and other cars with significant history at the venue.

Many drivers from the ’70s and ’80s are also confirmed to attend, with an unofficial reunion looking very likely in the Clubhouse Bar on the Sunday!

Roddy Greene, General Manager, Mondello Park, had this to say “We are delighted to have Tommy Byrne racing at our Historic Racing Festival.

As we celebrate our 50th Anniversary it’s great to have one of Ireland’s greatest ever racing talents take to the track in an historic F1 car. This will add to the amazing weekend of celebrations we have planned, it’s a weekend that all racing fans, young or old, will certainly enjoy”

The Mondello Historic Festival takes place on August 18/19. Drivers of classic cars and riders of classic bikes will be allowed into the event for free and will have a specific parking area.

Similarly, those wearing period 60s/70s attire will not have to pay admission. Other attractions include, live music, a Gin Bar, historic aircraft display and flyover and much much more.