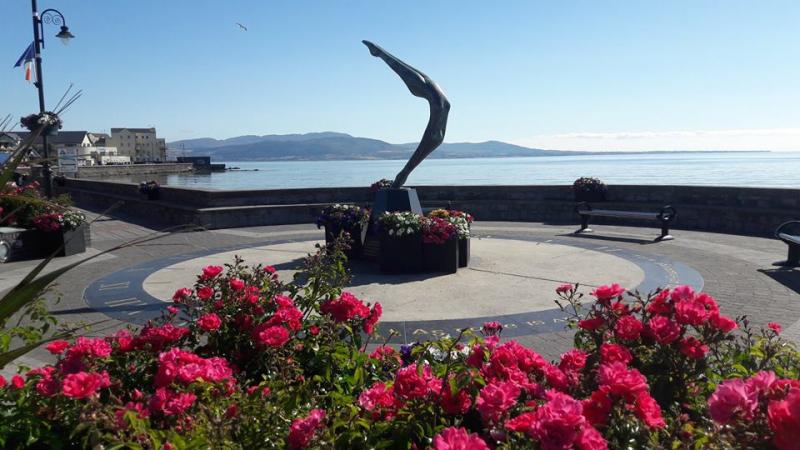 Blackrock Tidy Towns are delighted to have received notification that their application for LEADER funding for the final item in their trio of sculptures for the promenade has been approved.

The new sculpture will, like the Sundial and "Bradáin", represent a unique aspect of the maritime heritage of Blackrock. The Sundial, commissioned in 2000 and created by Tanya Elliott Nyegaard, represents the village's seaside heritage, while Richard Perry's "Bradáin", installed in 2013, represents it's fishing origins.

The new sculpture will represent the cockle picking heritage of Blackrock, and will feature the work of local artist and sculptor Micheál McKeown. It will comprise life-size figures of a man and a woman, created from woven brushed stainless steel, picking cockles from the beach and representing a scene which was once synonymous with the village. It will be located at the northern end of the promenade, in the raised bed opposite the Clermont, and is due to be installed before the end of the year.

The selection of Micheál McKeown's submission resulted from a lengthy process which saw a listing of 31 international artists eventually shot-listed to five. Each of the five was provided with a detailed brief and a budget to produce a proposal which would represent the maritime heritage of Blackrock in a new and unique way. The selection process used was recommended by Louth County Council's Arts Officer and was facilitated by an independent professional consultant.

Seventy-five percent of the cost of the sculpture will be provided by the EU's LEADER programme under the Department of Rural and Community Development, Louth County Council, and the Louth Local Community Development Committee partnered by Louth Leader Partnership. The balance of the funding will have to be raised locally by the Tidy Towns.

For many centuries cockles provided a valuable and sometimes the only food source for local people, and many of the current indigenous families of Blackrock owe their survival to cockles during the great famine of the 1840s. "The Cockle Pickers of Blackrock" will represent in a fitting way this unique piece of history for the village.

Micheál McKeown is best know for his outdoor commissions, including the iconic stainless steel sculpture "The Bull" on the M1 north-west of Dundalk. He has had eight one-man exhibitions in Ireland and has exhibited in the UK and the USA, and draws extensively on his knowledge of local history as inspiration for his work.