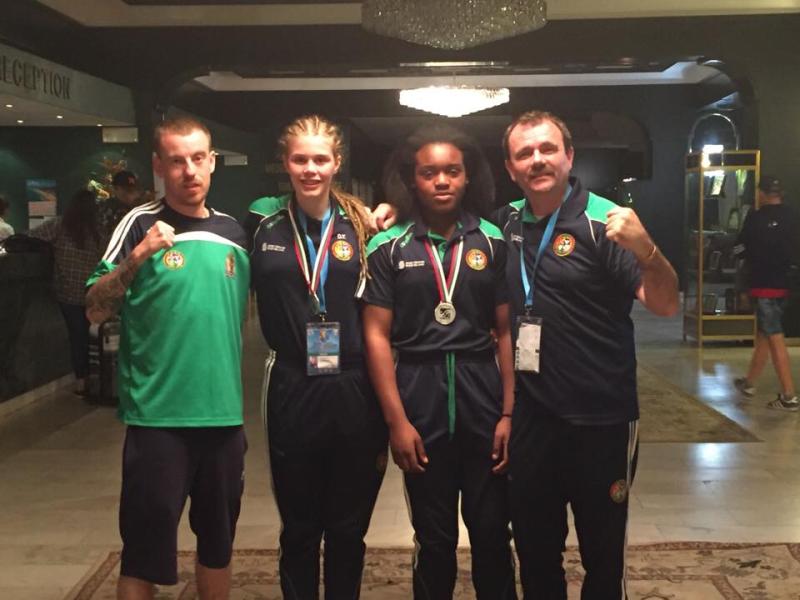 That’s Irelands record haul so far in this year’s European Elite Boxing International Competitions at aged under twenty two, youth and school boy/girl competitions since March of this year. Clann Naofa Boxing Academy can claim some credit in helping Ireland to achieve one of their best results at this level by winning three Silver Medals through Evelyn Igharo, Dearbhla Tinnelly and Nasya McJin-Igelige.

The first medal winner for Clann Naofa representing Ireland at this year’s Youth European Championships was Evelyn Igharo who powerfully tore her way through the youth 64 kilo girl section in Rome to eventually reach the final.

Unfortunately for Evelyn the intervention of a bad tummy bug weakened her, leading to her defeat in the battle for Gold to the English Champion Gemma Richardson in the critical bout leaving her having to settle for Silver as Richardson came out on top to win the Gold Medal.

Clann Naofa’s other two girls, Dearbhla Tinnelly and Nasya McJin Igelige followed Evelyn’s footsteps when they won the right to represent Ireland internationally by battling and winning their way through the All Ireland Boxing Championships which were held in the National Stadium in Dublin thus earning their way onto the National Team to represent Ireland in the European Schoolboys/girls Championships which were held in Abena, Bulgaria recently.

Dearbhla who comes from Knockbridge has only been boxing for just over two years but during that time has shown she is a superb competitor inside the four ropes proving that she is well able to go toe to toe with any one. So it proved to be when she met her first opponent the hot favourite Alena Krinicnaia of Russia at European Championship level.

She gave her adversary a standing count in the first round but the Russian had tough and brave credentials and eventually held out to hear the final bell. There was no doubt however about the winner and Dearbhla’s stunning win took her into the final where she met Karine Arapticon from the host nation Bulgaria.

This was a totally one sided contest which Dearbhla clearly and unmistakeably dominated from the first bell. Dearbhla completely out-boxed and dominated her opponent in every round and was the very obvious winner. However the Judges gave the win to her opponent to the disbelief of the Irish contingent by a split decision which denied the Gold medal to Dearbhla who then with great chagrin and disappointment had to settle for the Silver medal.

Her most bemused coach Mr. Jim O’Neill was in utter disbelief at the result. “In all my experience as an Irish and International Coach I have never seen a young boxer be denied such an obvious victory as was the distasteful outcome for Dearbhla today” said Mr O’ Neill.

Dearbhla’s team mate Nasya McJin-Igelige was also in action, first boxing the Ukraine number one for a place in the final. Nasya took total control of the contest. She out-boxed and out-fought the Ukranian Champion with such dominance that it resulted in Nasya winning the contest with a Judges score of 5-0 and secured a place in the final with the Russian Champion Valeria Vorontosova.

Nasya at only twelve years of age was the youngest contestant in the whole competition. Her Russian opponent was a very experienced champion boxer and although Nasya bravely and very skilfully gave her all in three very hard rounds it was a split decision that eventually resulted in her defeat to a boxer who just had so much more experience at this level than her at this stage in her fledgling career.

Happily however sadness soon turned to joy when Nasya was presented with her most deserved Silver medal and also a place in Irish boxing history by becoming along with team mate Dearbhla Tinnelly the first medal winners in the School Girl European Championships.

Clann Naofa would like to thank all those people and organisations who help to inspire and bring success to our boxers especially our Sponsors, our Local Community, the dedicated parents and families of our boxers, and all the many friends and supporters of our Boxing Academy.