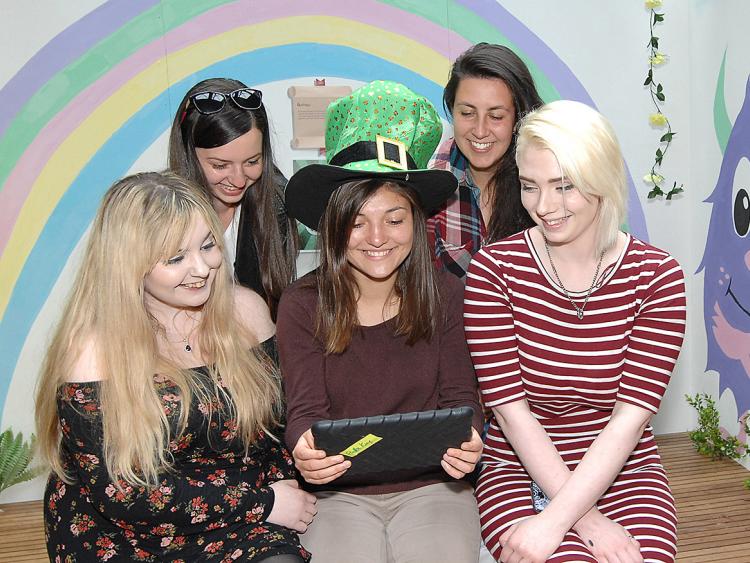 Fís 2018 at Dundalk IT begins this Wednesday

The Department of Creative Arts, Media and Music at Dundalk Institute of Technology will launch their annual Fís exhibition on Wednesday 6 June 2018 at the PJ Carroll Building.

The building houses a state-of-the-art TV studio, audio and radio recording studios, a photographic darkroom, performance spaces, edit suites and a screening room which has facilitated the development of innovative projects and exhibitions once again this year.

The exhibition will remain open to the public on Thursday June 7th from 2pm-6pm and all are welcome to attend. Admission is free. Fís 18 will feature exciting, new, innovative and creative work from final year students on our Communications, Film and Television Production, Music Production and Media Arts and Technologies programmes.

The projects, installations and films being exhibited and screened will represent the diverse creative skills of the students and are of interest to a wide audience. Fís allows students the opportunity to showcase their work with family, friends and industry representatives who will be in attendance at the launch.

Speaking about the launch of Fís 18, Dr Adèle Commins, Head of Department of Creative Arts, Media and Music, noted

"The exceptionally high standard of work created by our final year students which represents the strength of the Creative Arts in DkIT.

"We are thrilled to be sharing and celebrating the achievements of our students. We are confident that the skills learned during their programme of study at DkIT will provide them with the necessary skills to gain employment within the creative industries. We look forward to following their careers!"

"Fís is the highlight of the year for these students. It provides a platform to showcase their hard work and talent, not only to their classmates but also to their family and friends and the wider creative industries sector.

"It’s also a really social event with great energy, one we all look forward to."

The projects from students on the BA (Hons) Communications in Creative Media cover a range of themes such as the dyslexia, gender studies, autism, communication for mature students, schizophrenia and civic engagement.

The team for ‘DysledEd’, made up of Brian Judge, Paul Keenan, Rose McDonnell Ciara Power have created an interactive visual experience seen through the eyes of a student with Dyslexia in third level and their project demonstrates some of the struggles that students with Dyslexia go through while in the learning environment while providing solutions to those struggles.

‘ShEqualities’ was a project devised by Aine McEneaney, Aoife Brennan, Kevin McElroy and Stephanie Hayes. In this they aim to address the gender conversation surrounding females in the creative industry. They have explored how women specialising in design are underrepresented in the workplace in the creative industry and they aim to raise awareness about our unconscious biases.

Another group comprising of Sophie Sheeran, Natalie Lamont, Sarah Washington and Ryan Reilly have created a project to raise awareness in society. ‘SignIn’ is a series of web based interactive e-learning videos which aims to educate the emergency services in effective means of communication with people who are hard of hearing and deaf.

Tracks produced by students on BA (Hons) Production of Music and Audio include a diverse range of genres including rock, jazz and electronic music and these will be available at listening stations in the Carroll Building.

Projects undertaken by students on the BA Media Arts and Technologies reflect their engagement with innovative technologies during the year.

One of the creations from that programme is ‘Clown Control’ which is a Virtual Reality experience about a clown named JoJo who dreams about leaving the circus and his controlling father, Victor the ringmaster. Using a webVR game engine, the project uses the VR headset HTC Vive and its controllers to immerse the user in JoJo’s world.

This year’s launch sees the announcement of the winner of the John Moore Film Award. John is a film director based in Hollywood and known for his work on movies such as Flight of the Phoenix, Behind Enemy Lines, The Omen and A Good Day to Die Hard.

The John Moore Film Award to the best short film created by third or fourth year students on the BA (Hons) Film and Television Production degree from 2017. Given John Moore’s roots in Dundalk it is a great honour for Dundalk Institute of Technology to present the award and Dr Commins has noted the exceptional support received from John each year as he undertakes the difficult task of selecting the prize-winner.

Speaking in advance of Fís 2018, John has noted that

"For some years now I’ve been delighted to be associated with the film and media courses at DkIT. It’s hugely encouraging to see a fresh crop of talent emerge year after year, and I feel that the focus and depth of the course really can prepare students for a career in a global industry.

"The future is visual, that much is clear, and helping the students towards that future is a wonderful privilege."

Fís is a wonderful opportunity for both industry leaders and local communities to come together and enjoy creativity and the arts in the creative hub of Dundalk Institute of Technology. Fís 18 promises to be an exciting exhibition and all are welcome to come along and check out the various presentations.