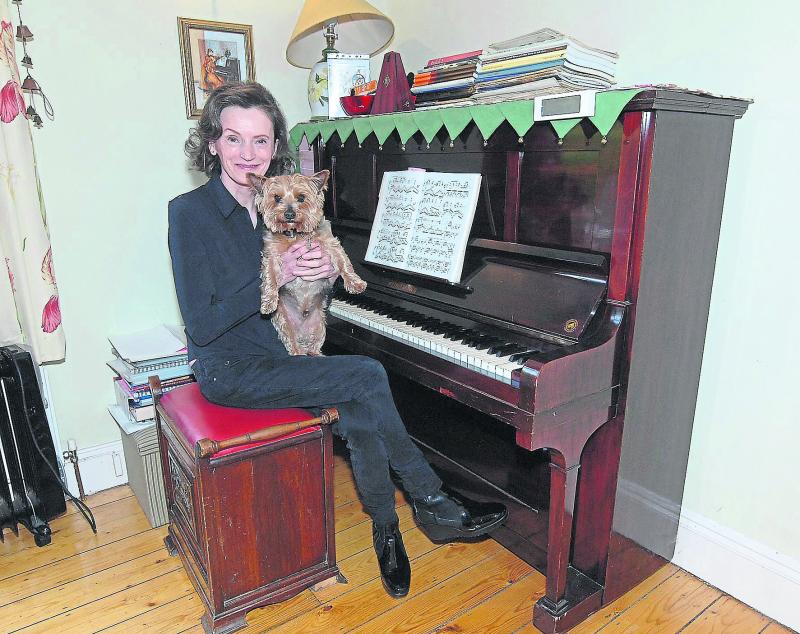 Dundalk woman, Loyola Browne, is currently readjusting to life as a film star.

The local lady, who is a former home economics teacher, recently found herself walking the red carpet in Dublin's Lighthouse cinema at the premiere for the critically-acclaimed documentary, Making the Grade.

And just a few weeks ago she shared a train back from Cork to Dublin with RTE newsreader Anne Doyle after they both appeared as guests on Today with Maura and Daithi.

It's no surprise that there’s such an interest in Loyola's story – it's not every day that you hear of someone returning to piano lessons after a 35-year hiatus.

The charming documentary, directed by Ken Wardrop, follows the relationships between Irish piano students and their teachers. It follows 51 Irish people who are preparing for their Royal Irish Academy of Music examinations.

The film was shown the prestigious South By Southwest festival in Austin, Texas last March which Browne describes as “surreal”. The Irish-made film has received rave reviews since its release with one reviewer hailing it as “truly life-affirming film-making”.

Dundalk woman Loyola thinks it may have something to do with its broad appeal.

“To enjoy the film, you wouldn't have to be taking piano lessons. It's a warm film that focuses on human relationships. It is full of beauty and joy,” she explains.

“It’s a film about ordinary people doing what they love to do. It's also a laugh out loud film. It’s very funny.”

And word seems to be getting out locally about the former teacher's star turn in – a recent screening at An Tain Arts Centre had to be moved to a different room, such was the demand.

“I was very surprised and touched by the attendance at the Dundalk premiere for the film. The support and the acknowledgment were unexpected. I didn't realise that I have all the friends I have,” said Loyola, who has been living in Dundalk since 1985 after moving from Galway.

“Playing piano is such a solitary practice,” she says. “And to be studying again and taking exams as an adult is a very vulnerable thing to do.”

“I'm going to reinvent myself as a piano teacher now whilst friends are retiring,” she explains with a twinkle in her eye, “It's very wonderful to surprise your children and even better to surprise yourself.”

As you would imagine for someone who took a 35-year break from piano playing, Loyola's path back to music has been a long and winding one.

The talented pianist says she had a wonderful childhood growing up in a family of nine in Tuam and began taking piano lessons as a young child with the nuns who lived right beside the family home. By 1979, her Leaving Certificate year, she t had reached Grade 8.

In the following years, she made a move to Dundalk and spent eleven enjoyable years teaching home economics at the Louis in Carrickmacross, St Micheals in Omeath and O'Fiach college before retiring to look after her family.

With her busy schedule, piano playing fell by the wayside. Browne says she played the keys sporadically. However, music was always there in the background to listen to.

“I found great joy, beauty, solace, and comfort in it,” Loyola explained.

It was another 35 years before she was drawn back into the world of piano following a series of tough circumstances in her private life which included a marriage separation and the serious illness of a close family member.

During these challenging times, Loyola says she was searching for something that would help her to cope when fate struck and she came across an ad for piano lessons in Dundalk Library.

“I started playing a piece of music by Liebestraum and the melody was so beautiful. I started to cry. It was a powerful moment.

“It was a half an hour per week where all I had to do was focus on what notes to play and what fingers to use. It just gave me time out. After that, I never missed a lesson.”

Loyola also noticed that the more time she committed to playing the piano, the more she regained her confidence and “sense of self” back.”

“When you go through life, and there are no words to describe what you're going through – music is just magic,” she explains.

Appearing in a critically -acclaimed documentary was another unexpected twist that the Dundalk lady never expected. It's one her adult children and family members are getting a kick out of. Loyola says she first agreed to be in the documentary despite not knowing much about the project.

“My piano teacher was asked to appear in the film with some of his students. I agreed and they did an interview with a few of the students and I didn't really think much more about it. My sons didn't realise it was going to be a full film.” said Browne.

The documentary makers followed Loyola as she went through her grades and got to grips with returning to piano lessons after 35 years. And now that Loyola has fallen back in love with playing piano as an adult, she practices as often as possible.

Since she has taken up the practice again, just four years ago, she has set a recital exam and achieved a senior certificate.

Browne is also an Associate of the Royal College of London, is currently studying for her Licentiate Diploma which she hopes she will achieve by Christmas 2018. Loyola's enthusiasm is infectious when she speaks of her favourite piece of music which she is currently preparing for the upcoming exam.

“I have an advanced level 40 minute concert-level program to prepare which will be a Rachmaninoff Prelude in G minor. It has huge depth and incredible beauty,” Browne says.

“What I find with Rachmaninoff is that the longer I spend with it, I uncover hidden charms. I'm very excited to be able to do it justice.”

For now, Loyola says she is looking forward to the next chapter: “I'm going to start giving piano lessons in Dundalk in the next couple of months. It will be lovely to be able to share my love for music with others.”

As for lessons learned from her incredible tale, the Dundalk woman says she urges people to seize the day and follow their passions.

“I have met some of the loveliest people since going back to piano. Once you follow your passion, you meet like-minded people,” says Loyola, “What I have found is that there is no reason why any of us shouldn't do the things we loved to do when we were young. I think that when we are using the skills and talents that we have, that's when we are living our best lives.”

If you would like to contact Loyola about piano lessons you can reach her by email at loyolabrowne@yahoo.ie.
Making the Grade is now being shown in selected cinemas across Ireland.