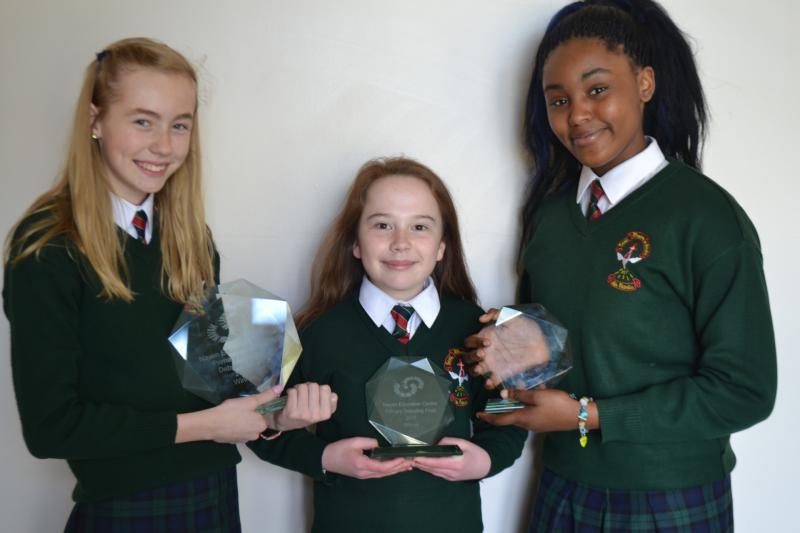 Ava Grace MacCormack, (team captain) along with her teammates, Rachel Woods and Amanda Kpaduwa, impressed judges with their ability to convey a persuasive argument and won the grand final at Navan Education Centre on Friday April 20th.

The team were opposing the motion that, ‘Ireland Should Give More Money to Poor Countries.’  It was a difficult topic to address as initially the pupils felt that Ireland should indeed give more financial aid to those less fortunate, but, with the nature of debates had to put their own personal feelings aside.  Through research, the girls found out a lot about government policies and corruption abroad as well as the homeless, trolley and nursing crises at home. The proposing team were from St Paul’s NS, Ratoath, who gave excellent speeches in favour of the motion.

This is the first time that competitive debating has been introduced to 6th class in Scoil Mhuire na Trócaire and initially it was for fun and to develop oral language skills. However, it wasn’t long before the pupils of 6th class realised they had a lot of talented public speakers in the class and 3 candidates, who represented the whole class, were put forward for the official school team.

In their journey to the final the girls also proposed the motion that, ‘Teachers Should be Replaced by Robots.’  St Francis NS, Blackrock, came back with very good opposing arguments but the motion was passed on the day and Scoil Mhuire went on to argue that, ‘School Uniforms Should Not Be Abolished,’ against St Kevin’s NS in Tallaght.

“The whole experience has benefitted the entire class,” said Donna Greenan, 6th class teacher. "Everybody got stuck in to researching arguments for and against and informal debates were held in class allowing every pupil to get involved.  The children worked on how to conduct themselves effectively, enunciation, tone of voice, eye contact and gestures.”

The Concern Primary Debates Programme led to an overall increase in confidence in speaking in front of a group.  The official team inspired many, during school assembly, when they show cased one of their speeches.

Vinny McCoy from Louth Toast Masters delivered advice to the class on public speaking and the pupils also took part in a morning of workshops from Concern Primary Debates. With such talent great things can be expected in the future from the pupils of Scoil Mhuire na Trócaire.