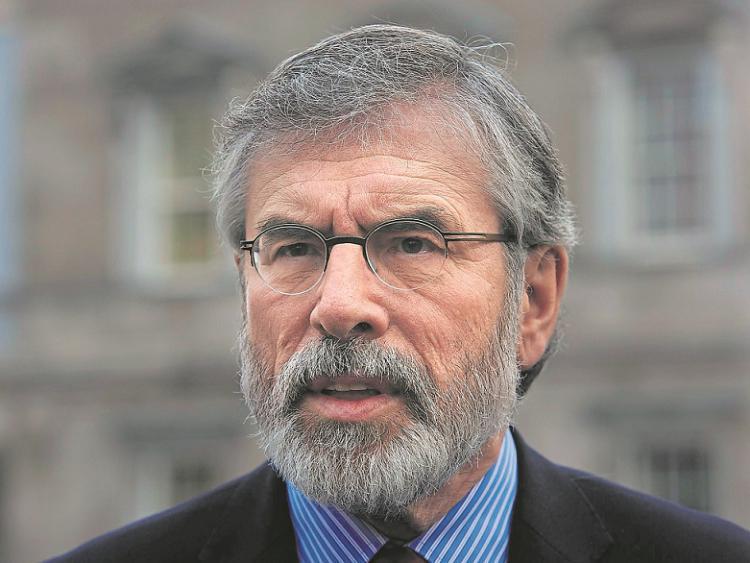 Louth Deputy Gerry Adams has accused the government of failing citizens with disabilities, citing the lack of provision for respite beds in Louth for adults with intellectual disabilities.

The Sinn Féin TD was speaking in the Dáil on Tuesday evening, during the party's Private Members motion on disability services.

His comments came after the Dundalk Democrat's story on Tuesday morning about how local charities such as the Louth/Meath branches of Spina Bifida Hydrocephalus and Down Syndrome Ireland had seen vital funding for respite breaks and Early Intervention Therapy slashed by savage cuts.

Adams spoke specifically about the ongoing crisis in the lack of provision of respite beds in Louth and what he said was the ongoing absence of emergency respite beds. Adams called on the government to provide the legislation, funding and services needed by citizens with a disability.

"There are 643,000 individual citizens, many with families, trying to financially, physically, emotionally cope with a disability," he said. "It used to be that these citizens were locked up in institutions. Thankfully, those days are gone.

The former Sinn Féin President said that while the Ombudsman's recommendations were accepted by both HSE and Tusla, the Health Service Executive pointed out that it's committment was resource dependent.

"In other words, it needs the funding," Adams continued. "I raised this issue at the time. I know also from my own constituency that this is the case. I and other local TDs have been highlighting the crisis in the provision or lack of provision of respite beds in Louth for adults with intellectual disabilities.

"Despite this, and all of the promises from the government, there are still no emergency respite services for the citizens in the constituency that I represent. There is still no Disability (Miscellaneous Provisions) Bill 2016. There is still no Decision Support Service as promised in the Assisted Decision Making Capacity Act 2015.

Among the examples used in his speech in the Dáil was 13-year-old Brendan McGinnis, son of disability rights advocate and campaigner Tracy.

“Brendan in 13 years old with a diagnosis of Cerebal Palsy," Deputy Adams said. "His condition is life limiting. He is bed ridden. He has open sores. He has scoliosis and is awaiting surgery. He has profound medical needs. Brendan’s mother is fighting to get in-home respite care, and a homecare package that meets his needs.

"It may be that the government will not oppose this PMB. That would be welcome. But it won’t be good enough. Because it will not make one iota of difference to citizens with disabilities; to their families; to carers; and to those in the voluntary and community sector who help them.

“And it will not make any difference unless and until the government ensure that funding is made available to meet the needs of these citizens. Unless it makes these citizens and their rights a priority. Unless as Teachta Ó Caoláin has said, unless the Taoiseach champions this cause. And nothing else will be good enough.”

In an interview with the Dundalk Democrat this month, Tracy said she was attempting to get a new house that could cope with Brendan's complex medical needs.

"I just want to save my son’s life, for as long as I can, and make it the best it can be while I am blessed to have him in my life. My son’s life is literally dependent upon having the proper house."