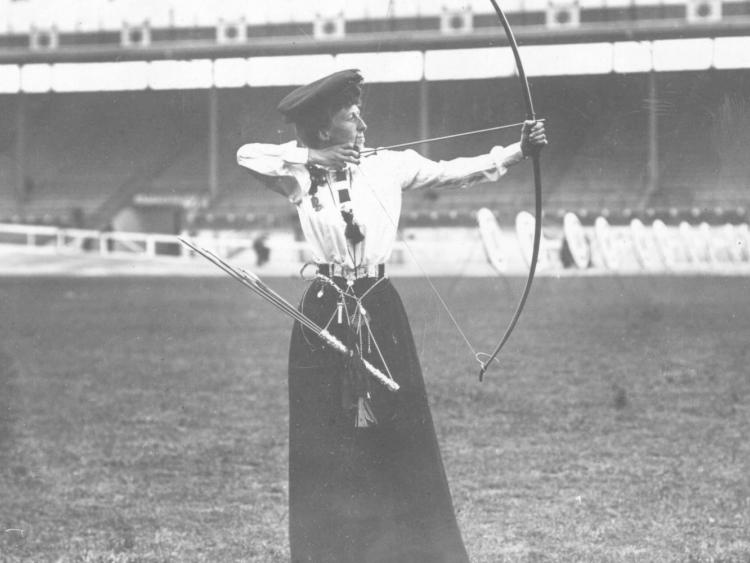 Beatrice Hill-Lowe was originally from Ardee.

To coincide with International Women's Day, the Dundalk Democrat looks back on the story of Beatrice Hill-Lowe, the Ardee-born woman who became the first Irish female to win an Olympic medal - 110 years ago.

Beatrice Hill-Lowe, a name unknown to most, is not what many people would consider Ardee's most famous export. But she probably should be.

A famed archer, she was an Olympian. In fact, she was the first ever Irish woman to win an Olympic medal of any kind. Her success came way back in 1908 - which goes a long way to explaining why she is not exactly a household name in Ardee, or anywhere else.

Things are so, so different now but back then, archery was the only sport in which women were permitted to compete. That was due to the fact that they were only allowed to take part in a sport in which they remained fully clothed.

The 1908 Olympic Games were held in London and Hill-Lowe was one of just 37 women among 2,035 athletes from 22 countries who competed.

At the games, she took third place in archery – and a bronze medal with it – with a score of 680 points, 70 behind gold medal winner Queenie Newall. Newall was 54 at the time, Hill-Lowe was 40 years-of-age.

Her first husband was the spectacularly-named Commander Arthur Hill Ommanney Peter Hill-Lowe, who served in the Royal Navy. He died in Shropshire in 1910, just two years after Beatrice had competed in the Olympics. They had married on 15 July 1891 when she was 23.

Beatrice would later get married again, to a man named Thompson and they lived in Pembrokeshire, where she died in 1951 aged 83.

In 2012, Hill-Lowe’s bronze medal from the 1908 Olympics was acquired by Louth County Musuem and was displayed there as part of it’s ‘Patriot Games: Ireland and the Olympics 1896- 2010’ exhibition.

Speaking in 2012, musuem curator Brian Walsh said Hill-Lowe was "the women who paved the way for Irish medalists such as Katie Taylor and who we are proud to say was a Louth woman."

It is intended that the medal will eventually be housed in Ardee Castle, if-and-when it is eventually redeveloped and opened to the public.