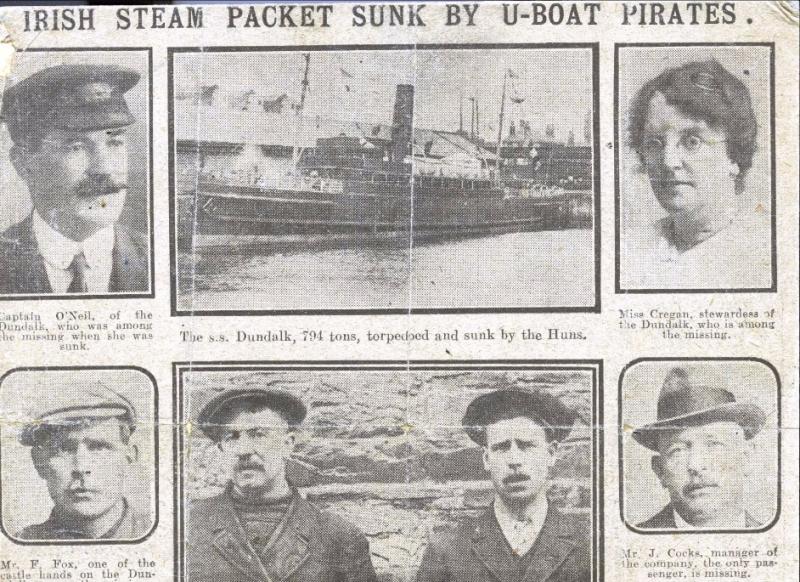 A tragedy which claimed the lives of twenty men - many from the town or immediate surrounding area.

In St Patrick's Church on Roden Place, there is a plaque, along with a stained glass window, to remember those who perished when the ship was torpedoed that night just off the coast of the Isle of Man by a German submarine. There are nineteen names on the plaque. The only name missing is a Mr Harold Grey, who was from Swansea in Wales. In London, at the Tower Hill Merchant Navy Memorial, Grey's name is included, however, but Mr Samuel John Cocks, who also perished on the SS Dundalk and was the manager, is omitted, as he was not officially a Merchant Seaman.

In a strange quirk of fate, quite a number of the regular crew, all from Dundalk, had influenza in the week prior to the disaster and were taken from the SS Dundalk on 8th October with replacement crew members drafted in in their stead. For some of those who were removed due to this bout of ill-health it was not to be a lucky case of cheating fate - quite a few ultimately succumbed to influenza - which was almost certainly the same strain which would later be infamously known as 'Spanish Flu' and eventually go on to kill between 50 to 100 million people globally that year, in what was one of the deadliest natural disasters in human history.

Twelve of the crew did manage to get two lifeboats launched before the SS Dundalk went down. They suffered a horrifying 17 hours adrift at sea, eventually being rescued by the S.S. Douglas and the trawler Stormcock.

The tragic story of the SS Dundalk has been told and retold many times - it's importance to the relatives and friends of the deceased has rarely diminished in the intervening 100 years.

However, at the time of the sinking, the tragedy did not receive extensive coverage and did not become a greater story across Ireland because just four days earlier the SS Leinster was also torpedoed and sunk just outside Dublin Bay with the staggering loss of 500 lives.

The SS Dundalk tragedy quickly drifted away from the few headlines it had generated at the time. But it has never been forgotten in the place its loss was felt the hardest - right here in the town it was named after. Less than a month after the sinking, the First World War officially ended, but the grief and loss of the loved ones of those who perished on the SS Dundalk continued.

Just over a week after the sinking, on Thursday 22nd October 1918, a fund was set up by the shipping company and Cardinal Logue in Dundalk Town Hall to help aid the dependents of the victims of the sinking, especially children. The fund would go on to raise £6000 for the families.

In recent years, there have been some well-received local efforts to ensure this loss is remembered by the current generation and hopefully beyond. In 2010, to mark the 92nd anniversary, Dundalk Sub Aqua Club dived on the site of the wreck off the Isle of Man and placed a plaque of remembrance sponsored by Dundalk Town Council.

Now, to coincide with the centenary, a call has been put out to do something worthy and truly deserving to mark the loss.
There are early plans afoot by the County Museum for an exhibition and it is hoped that this will complement other events currently in the planning stages.

Following a public meeting on Thursday February 1st a committee has been set up to organise commemoration events. For more information, you can contact Anne Howard on 0861082157.