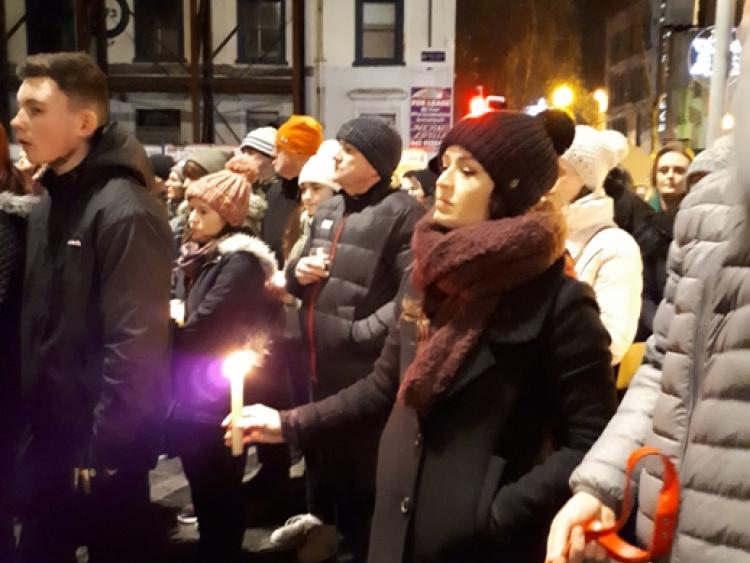 The candle-lit vigil held in Dundalk for Yosuke Sasaki

A HUGE crowd of people attended the candle-lit vigil held in Dundalk earlier tonight for Japanese man Yosuke Sasaki who was killed on the Avenue Road on January 3.

Dundalk Institute of Technology (DkIT) business student Veronica Tedzhoyan who is originally from Germany but is currently living at Mourneview Hall in Dundalk told the Dundalk Democrat that she had attended the vigil to "show solidarity".

"I'm here to show good will. It's important to show everyone and to support people and to stand up for good and peace and love," she said.

Catriona Watters from Doylesfort Road, Dundalk said: "I just think the town needs to show support to Yosuke and his family. It's such a tragedy."

She added: "I thought the vigil was lovely, all the music was very touching. It's nice his work mate spoke on behalf of the company Yosuke worked for."

Tina Bellew from Castlebellingham worked with Mr Sasaki at National Pen. She said: "I didn't know him well but he always had a smile on his face and seemed like a lovely guy."

She added that the staff at National Pen are "devastated" over what happened to Mr Sasaki.

"We are very supportive to one another. It has brought the two teams a lot closer. I think the vigil is a credit to the town. It was very well organised."

A second National Pen employee, Catherine Crosby from St Nicholas Avenue, Dundalk said there was a "great turn out" for the vigil.

Donna Quinn from Muirhevnamor thought it was "lovely, emotional and sad but well done". David Crosby from St Nicholas' Avenue said: "It was really nice".

Chris Ellis from Doolargy Avenue said: "I came to the vigil to show my support for Yosuke and his family and the two Dundalk lads that were injured. It was a nice turn out for a small enough town.