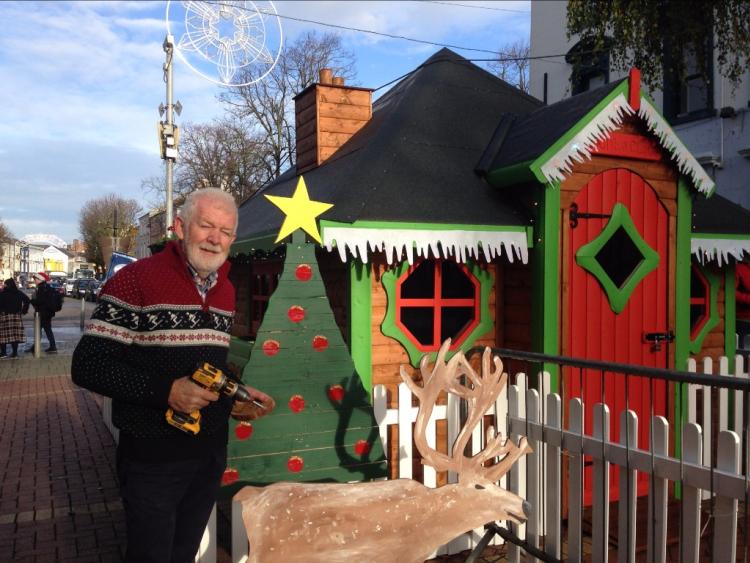 ORGANISERS and participants of this year's Frostival are busy with the final preparations as it is due to kick off later today (Friday, November 24).

GlenGat BnB owner Tim Mullins was out this morning on behalf of Dundalk BIDS putting the finishing touches to Santa's Grotto on Earl Street.

“It's nearly all done. I'm just doing some drilling to make sure it's all safe. Dundalk BIDS bought the grotto from Watters and Dundalk Mens' Sheds made all the decorations,” said Tim.

“They made reindeers, Christmas trees and all the fencing. They did a fantastic job and should be very proud.”

The big man himself – Santa Claus – is due to be at the grotto from 3pm to 6pm today and from 1pm until 5pm tomorrow (Saturday, November 25).

Children are invited to visit him free of charge to deliver their Christmas present wishlist. The Dundalk Christmas Market will also be open outside the Court House.

There is also a Little Elves Fun Zone at the Market Square, a Frostival train, and the grand finale of the Great Dundalk Bake Off is due to take place in An Táin Arts Centre in the Town Hall at 4.30pm.

Dundalk BIDS is also holding a charity cake sale from 12pm to 3.30pm. Dundalk Men’s Shed Choir are set to perform in An Táin Arts Centre at 4pm.

The King’s Church Gospel Choir will be performing at Market Square from 5pm leading up to the Christmas lighting ceremony at 5.30pm.

It will be officiated by the Cathaoirleach assisted by Kyle Norton and his Special Olympics teammates who will turn on the Christmas lights and officially open Dundalk on Ice.