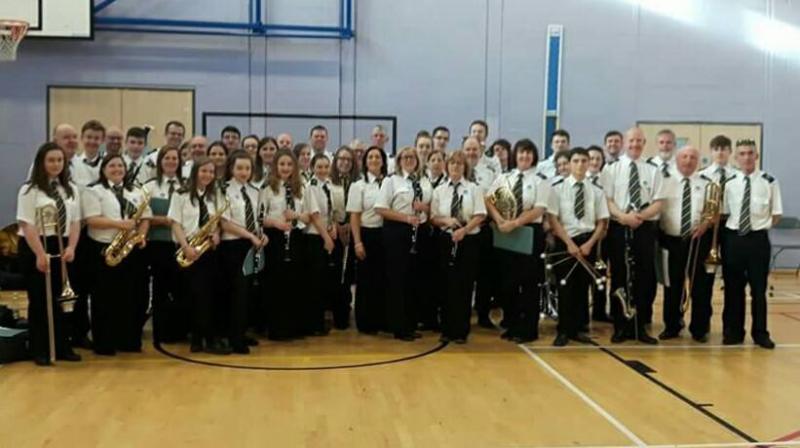 They took part in The Community Wind Band Class. This section is classed for bands with players of all ages and all levels of ability.

The mighty 44 strong band and their supporters from the wee county travelled across the Irish Sea by ferry to take home the highest award of the competition. They placed 1st in their section and received a Platinum award for their outstanding efforts. In the words of one adjudicator; “One of the finest community band performances we have had in some time. You are a credit to community banding, with 2nd and 3rd level students, as well as adults, giving a truly memorable performance today. Thank you for your patience, commitment, and fabulous musicianship!”. They played two pieces under the baton of Musical Director Brendan Breslin; Four Noble Truths by Philip Spark and New York by Nigel Hess.

The band decided to travel to compete in the regional qualifiers for the UK’s North West Regional Band Festival for a number of reasons. It’s a chance to play in a different type of competition than our Annual Irish Nationals as it is graded rather than a points system and it is also an opportunity to get away as a group whilst still having a serious musical focus. It was also a chance to test the band and its individual abilities within a different environment against different contestants.

“This is a wonderful achievement for the band, to play against bands that we don’t know anything about and leave our music stamp on the UK Band Scene”, said Band PRO Sinead Nutley.  Honorary Band President Austin Nevin announced the win to the band’s weekly Bingo goers on Sunday evening last, who met the news with rapturous applause. He thanked the patrons of the Weekly Sunday Night Bingo for their continued support as the Bingo is the Bands main income earner and it’s because of them that the band is in the fortunate position it is in today.