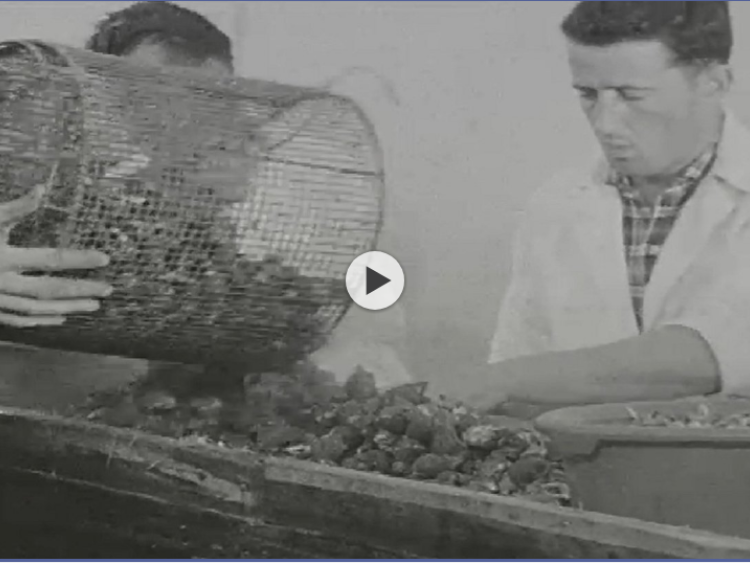 Whelk, a marine mollusc, was once a very popular snack in England. The sea snails were caught in Carlingford Lough and processed for export.

RTE news reported on that trade trend on this day in 1967:

"Seaco a fish processing company in County Louth are shipping 400 gallons of whelks caught in Carlingford Lough to England every week. ‘Newsbeat’ went to see how the whelks are caught on the bottom of Carlingford Lough and prepared before being exported for consumption in England. Frank Hall provides a humorous and witty commentary to the report.

"The whelks are caught in baskets and brought ashore before and then to the Seaco factory in Omeath. The whelks are plunged into a boiler before being let cool. In the shelling room a team of 15 people remove the whelks from their shells using a small fork and a little twist.  The whelks are then packed into gallon drums and covered in vinegar. Then they are ready be shipped to a variety of towns and cities in northern England."

This report for Newsbeat was first broadcast 27 September 1967. The reporter was Frank Hall.

‘Newsbeat’ was a half-hour feature programme presented by Frank Hall and ran for 7 years from September 1964 to June 1971. ‘Newsbeat’ went out from Monday to Friday on RTÉ television and reported on current affairs and issues of local interest from around Ireland. The final programme was broadcast on the 11 June, 1971.