Barrage Balloons over Dundalk during the war 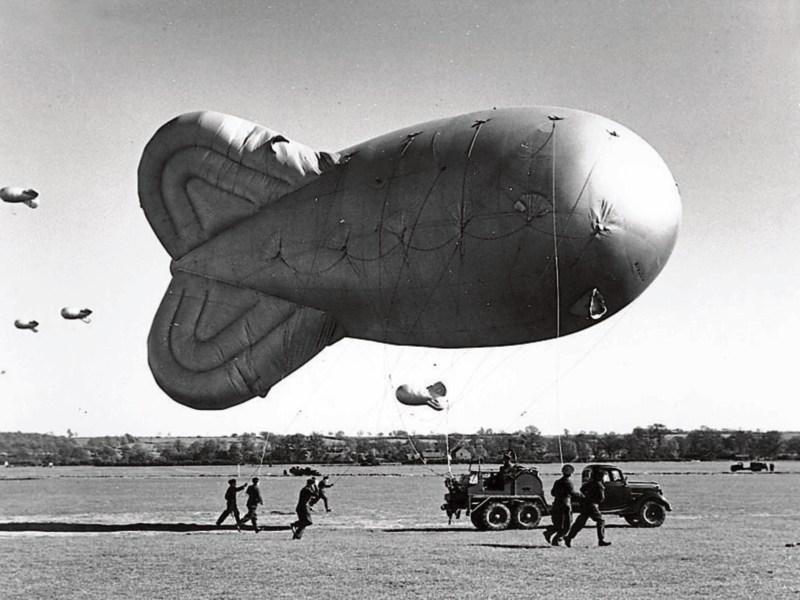 My most abiding memory of the World War II Emergency as a child was of barrage balloons!

Not that there were all that many to be seen over Dundalk but the few merchant ships that used the Port during that period often flew one from the stern when they were moored at the Quays. In fact, the night, in July 1941, that the one and only bomb that was dropped on Dundalk during the period, it fell in mud behind the Quays while a ship belonging to Kelly's of Belfast was berthed there with a barrage balloon hoisted. Charlie McCarthy tells me that this was the SS Donaghdee delivering a cargo of coal to the Connick's yard owned by the Kelly company. Whether or not this ship was the target of the German bomber will probably never be known but it seems unlikely as ten other smaller bombs were dropped by the same plane in fields at Donaghmore. It is more likely that they were dropped randomly by a German pilot wanting to lighten his load so that he could get back to an airfield in France.

Charlie tells me that these ship barrage balloons were usually only in the air while their ship was moored as the vessel would have been difficult to manoeuvre when sailing, especially if there was a strong wind blowing. They, however, were used to some extent by naval ships protecting the convoys crossing the Atlantic but you will not see many photographs or newsreels of these balloons being deployed by ships afloat.

My own recollections of these barrage balloons was seeing a forest of them above a fleet of American naval ships moored in the Foyle at Derry. This would have been at a time somewhat later in the War, probably shortly before the D-Day Normandy Invasion.

Victor Whitemarsh, in his pictorial record 'Dundalk in the Emergency', published in 1977, gives an interesting account of these 'balloons over Dundalk'. In this book he writes ---

'It was possible, on very clear days, to see barrage balloons floating high in the sky, moored by cable to airfields and factories around Warrenpoint. These balloons were usually in batteries of three kite balloons of 40,000 cubic feet capacity each, one at the centre and two at either end of a horizontally floating cable 1,000 feet in length. From this was suspended at regular intervals a series of steel wires trailing earthwards, like flexible teeth in an enormous comb. Enemy planes were thus forced to climb above this obstruction and were rendered harmless, or to dive below it and risk being blown out of the sky by point blank anti-aircraft fire.'

In another place Victor says – 'It was not uncommon for stray balloons to drift across the Border, carried by the wind, their mooring ropes trailing the ground. Some people tried to catch these maverick balloons by tying the rope to garden fences and sheds, often with disastrous results.'

These large cigar shaped balloons were filled with either hydrogen or helium gasses. I gather that hydrogen was more usual as it has a greater lifting power and is cheaper to manufacture but it is also more dangerous. This gas was used in Zeppelins by the Germans during World War 1 and later for their commercial airships but helium was used, and still is, to float dirigibles after the Hindenburg airship disaster in 1937.

Smaller versions of these barrage balloons are still used for advertising purposes and I was reminded of this when I learned recently that the Dundalk Democrat offices had moved to Williamson's' Mall, off the Rampart Road. Readers may recall that such a balloon was to be seen floating over the area back in the autumn of 1989, if I recall the year correctly, when the old timber yard between Frances Street and the Rampart was converted into a shopping mall.

It made quite a stir at time but it must have reminded some older Dundalk folk of the difficult times they had experienced during the Emergency.

This balloon, and others like it, must also have reminded older people that there had been a great fear of aerial attacks on the Town at the outbreak of World War 11. On a evening in September 1939, shortly after War was declared, a small aeroplane flew over the Greyhound Stadium at the Ramparts while a race meeting was in progress and caused most of the 'punters' to run out of the grounds in panic because they feared an air raid.

This fear of attack from the air was renewed back at the time of what was known as the 'Cuban Missile Crises'. I joined the Civil Defence as a Warden during that period and I can recall getting lectures about what to do if an atomic weapon missile landed on an English city like Liverpool. We all realised quickly, however, that all our precautions would be pretty useless against aerial radio-activity and all we could do was to hope that such contagion did not come our way! People these days do not seem to be so worried about a nuclear 'slug-out' between North Korea and the U.S.A. or any other world power but, maybe, they should be!