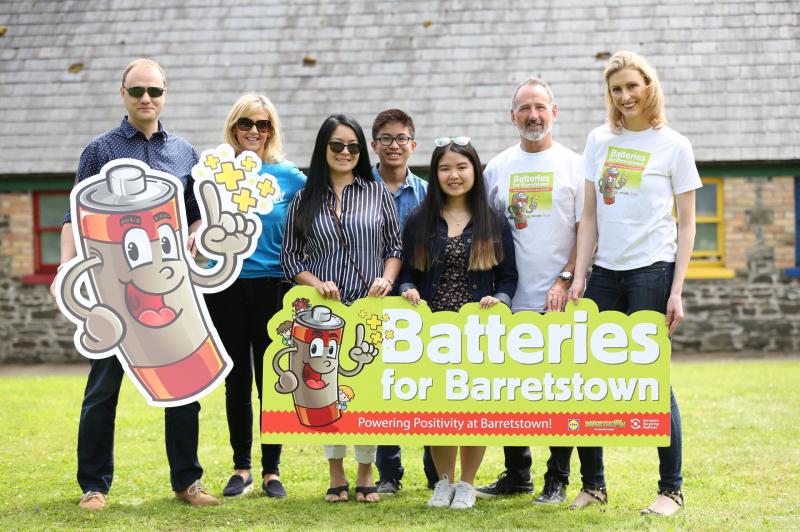 European Recycling Platform (ERP) Ireland, in association with Lidl and Barretstown have launched 'Batteries for Barretstown', a initiative to increase the recycling of batteries in Ireland.

As well as changing people's approach to battery recycling the campaign aims to raise much-needed funds for the children’s charity Barretstown.

At the launch were the Bartell family from Castlebellingham, included in the above photo are, Dominik, Mayeth, Trinity and Troy Bartell.

The campaign will facilitate an increase in the numbers of batteries recycled and will help raise vital funds for Barretstown’s camps for children and families affected by serious illness simultaneously.

Batteries can also be recycled free of charge in any retail store selling batteries, in schools, libraries, civic amenity sites or at one of ERP’s free recycling events held across the country and all batteries collected will contribute towards the initiative.

Funds raised by ‘Batteries for Barretstown’ will help to Power Positivity by funding the charity’s energy costs over the next three years.

‘Batteries for Barretstown’ are also featuring in Lidl stores nationwide, with branded ‘Powering Positivity’ battery collection points in each store.

Speaking at the launch of ‘Batteries for Barretstown’, CEO of ERP, Martin Tobin said:

'We are delighted to be partnering with Lidl and Barretstown on the ‘Batteries for Barretstown’, Powering Positivity initiative.

'The message in this campaign is a hugely positive one, which we hope will drive people to dispose of their waste batteries in an environmentally conscious way, whilst raising funds for a worthy children’s charity.

'Each year in Ireland thousands of batteries are disposed of in standard domestic waste, and we hope to raise awareness of the ease by which they can be recycled by facilitating collection in local Lidl stores.

'Batteries can also be recycled free of charge in any retail stores selling batteries, at your local recycling centre or at one of ERP’s free recycling events held across the country.'

“Lidl Ireland has been actively moving towards a more sustainable and environmentally conscious business model and has also had a long-standing partnership with Barretstown having raised €1.8 million to date, as such we are delighted to support ‘Batteries for Barretstown’ and to be involved in Powering Positivity over the next three years.

'This partnership with ERP allows us to demonstrate our commitment to sustainability and to contribute to the Barretstown camps.

'There is an onus on consumers and on businesses to be more environmentally conscious and we hope that the campaign will encourage our shoppers to think about their habits and to dispose of their batteries in a sustainable way by dropping them into the collection points available in our stores.'

‘Batteries for Barretstown’ battery recycling campaign is a very exciting project for us and we are thrilled to be involved in helping to motivate people to become more environmentally aware and to change their battery recycling habits.

'The commitment to Powering Positivity at Barretstown, is enormously important to us in providing facilities for our campers and for their families, and we are very excited about the positive energy being generated by the campaign.'