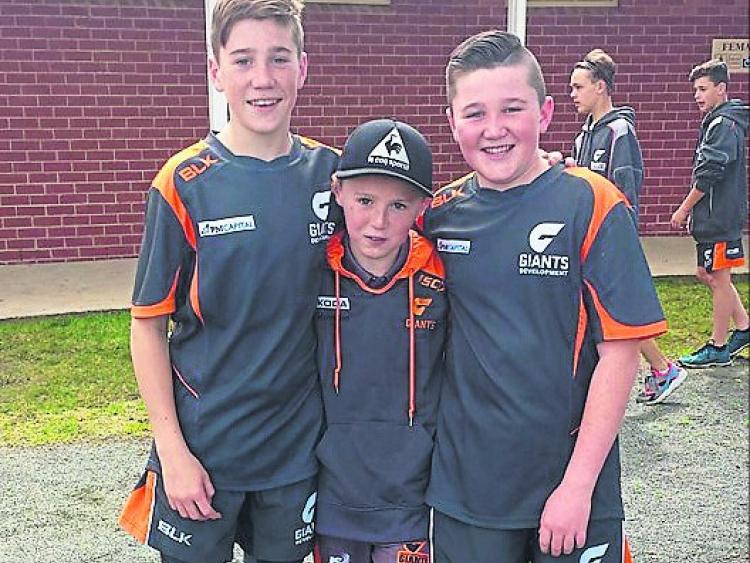 Undertaking an adventure which involves moving your wife and four kids, who ranged five to 15, halfway around the globe to a fresh start, with fresh opportunities, is certainly not a decision to be taken lightly.

However, Ray and Lorraine Murphy took the decision to move to Australia with their children’s futures firmly in mind. It hasn’t all been plain sailing though with bereavements at home and a general lack of trustees outside the immediate family circle proving considerable hurdles to overcome.

“When I came over, the only man I had was Alan Finnegan and he was down the country so we were really on our own and with the other setbacks along the way, it has been far from plain sailing,” Ray told the Dundalk Democrat

“I used to play football with Adrian Donohoe and he died shortly after I came out here and then Eamonn Carroll, a first cousin of mine, died too, and then for Lorraine (his wife); her brother passed away not too long into our stay here and her mother then passed on last year.

“She had been travelling over and back to her mother for about a year before she died and it was really, really hard on her but we have moved out here for the kids, to allow them to have more opportunities, and we couldn’t take any of them away again.

“The last 12 months have been very hard, the hardest since we moved out, but we feel that we have gotten over the first hurdle, which was settling-in, so we’re probably here for the long haul at this stage. After all, there are plenty of Murphys in Australia like us,” he quipped.

The entire move to Australia came totally out of the blue, Ray explains.

“It’s a funny story actually. I worked for John Breen, just around the corner from Crowe Street, in the phone alarms industry.

I was there for over 10 years, fitting security systems.

“I had a friend in Australia who was telling me all about the opportunities and jobs available out here. He always went mad telling me to come out, but I kept thinking; ‘I’m married with four kids, so how can I ‘up sticks’ now.’

“But, I went home one night and looked into the job prospects in Australia and flicked off the CV and after several emails and a phone call with a man who owned a security industry, he offered me the role.

“They wanted a senior guy with security experience and they said I was their man so at that stage I had to sit down with my wife and discuss the pros and cons.

“It was a case that if I didn’t go, I’d probably regret it. We had a holiday booked for the summer of 2013 so the previous Christmas I decided to take the Australia job. I headed out for the first few months myself to see how things were, came home for the holiday and during those 10 days in Spain we decided to go for it in Australia.

“The family agreed to go for the first 12 months and see how things went but everybody settled in really well over here. My daughter, Kim, struggled the most at the start because she was 15 when we went over so she missed home and her friends, etc.

“But if we were to say that we were moving home tomorrow, she wouldn’t come. She wants to be a police officer and that’s what she’s studying. I’m still working away with the same company that I came over to – Independent Locksmiths and Security – and everybody seems to have settled here permanently at this stage,” he added.

For the three Murphy boys – Jamie (15), Cillian (14) and Ray Óg (12) – their sporting careers have simply taken off since they landed in Oz. AFL, more locally known as ‘Australian Rules’, is their game of choice, their passion.

All three have landed coveted places in the underage ranks of the Greater Western Sydney Giants (GWS Giants) - a feat comparable to them enrolling on the books of an English Premier League club.

Prior to leaving the Emerald Isle, the boys played Gaelic Football with St. Patrick’s and soccer with Bellurgan; showing a keener interest in the soccer.

However, once being introduced to AFL, there has been no looking back. Particularly in Ray Óg’s case; the transformation to an oval ball has been seamless.

“Thus, the boys would have played gaelic with the Pats as well as soccer with Bellurgan. They probably would have favoured the soccer more which meant I got involved in the coaching side there too and it would have been the same when they came over here too. They played soccer and AFL for a while, but now they’re AFL all the way.

“There is a lot made about the AFL at home, but when the boys came out they wanted to give it a try so they headed for the local club and it’s been progress ever since. It’s actually amazing to think how far they have come because it’s a totally different game to anything that they’d been used to.

“Probably the biggest difference between GAA and AFL is the ball because bouncing an oval as opposed to a sphere is like chasing a hare – you don’t know what direction it’s going to go,” Ray chuckled.

“The youngest fella – Ray Óg – would have picked it up the quickest because he’d have started at a younger age than the other boys, but certainly the ball skills that they would have picked up with the Pats has stood to them.

“But, the three boys just started off playing with the local club here in Sydney, the Baulko Hawks, and the way it’s run, there are representatives or scouts from each of the professional clubs who go to the games and assess certain players.

“This year was a massive year for Jamie in particular because at 16 they start cutting the panels from about 44 to 22 so he was back training since January and, although they don’t play very many games, their training is very intensive. There’s just no messing at all.

“Jamie was one of four boys chosen from the U15s to train with the U16s simultaneously and he’s since been invited back so the vibes are good that he’ll be kept on, which would obviously be fantastic.

“He’d be a half-back because of his lighter frame so his job is normally to get in around the breaks and pick up the loose ball around the middle of the field.

“Cillian did fierce well last year too because having missed the start of the season, he worked his way back and got picked on a special squad which went to a tournament down the country.

“Considering he recovered from a broken ankle to get playing against similar teams from all the way down the gold coast was brilliant for him. They got put up in hotels and everything so that experience was super for him and he really enjoyed the whole thing.

“In terms of Ray Óg, the Sydney Swans would have always been that bit further ahead with their underage set-up. They start their academies at U10 level whereas this is the first year that the Giants have started an U12 programme.

“Ray Óg was picked for the U12s which was great for the family with the three boys being involved. The three boys would be very close because when they came out; they only had each other. There’s less than four-years between them which meant they were able to keep each other right early on.

“They were treated like celebrities in the first couple of weeks of school because everyone wanted to hear their Irish accents and the way it works, the AFL doesn’t interrupt their school time which suits perfect.

“They normally get in from school at around 3pm and then they’re out the door after four for a two-and-a-half-hour session with the Giants. I suppose, when you think about it, the amount of training is physically a tough ask but the lads are so fit and strong at this stage that it’s nothing to them.

“Jamie was away with the U16s recently and there were ice-baths and recovery sessions all planned and mapped out for them. He may only be 15, but he’s taken huge steps forward physically.

“I’m around 5ft 10 and he’s nearly as tall as me at this stage and you can see that he’s now reached a level where he knows he needs to be working on his physical condition because he does be doing push-ups and sit-ups at home and then going around thinking he’s full of muscle,” his father laughed.

Ray finished: “Whatever chance you take in life, there are always going to be ups and downs.

“Of course, we talk about the pros and cons of moving home but we have come out here for the kids and to give them better options for their lives. Take Kim for example, she wants to be a police officer, something that she probably wouldn’t have even thought of being at home. Here, that’s all she wants to do.

“We took the chance and tried it for 12 months, but we’re still on that journey; a journey which doesn’t look like ending any time soon…”