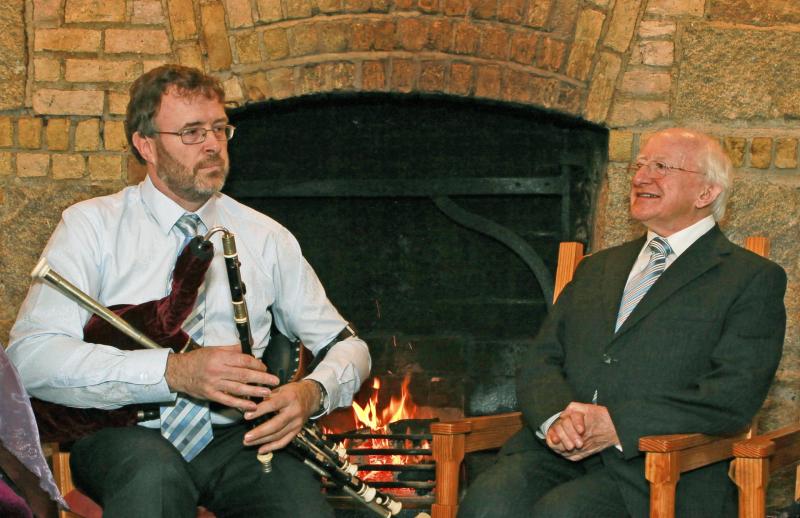 Padraig Donlon, who has lived in Dundalk for more than thirty years, will take centre stage at this year's Fleadh Cheoil na hEireann in Ennis when he's awarded the Ard Ollamh na Fleadh accolade at a gala dinner in the West County Hotel on Wednesday night (August 16th).

The Ard Ollamh, or High Professor award, is one of the highest accolades granted by Comhaltas Ceoltoiri Eireann - the primary organisation promoting traditional Irish music, song and dance in Ireland and around the world.

An All-Ireland uilleann pipes and tin whistle champion, Padraig receives the honour in recognition of the special contribution he has made to the on-going development of traditional music.  A member of Louth County Council’s technical staff, he has lived in Dundalk for more than thirty years, but maintains strong links with his Lanesborough roots in Longford.

He comes from a well-known musical family in South Longford. Both his mother Veronica, and his late Father Jim Donlon played the fiddle, and his sisters Teresa and Nuala are well-known musicians in the region.

He learned to play music from his father, and grew up playing music alongside local musicians such as Pat Shea, Peter Carberry, James Hanley, Dan Kelly, Paddy Kearney, Jimmy Fallon and Mickey Flynn. He spent much of his younger life playing in junior ceili bands organised by Fr. John Quinn, a curate for many years in Lanesborough. In addition to the All-Ireland titles he won on pipes and whistle, Padraig also holds an All Ireland trio title as well as five All-Ireland senior ceili band medals. He was a founder-member of the highly regarded Tain Ceili Band which won three All-Ireland titles in a row 1998-2000.

His contribution to the promotion of Irish music both at home and abroad is significant, and he is indeed a deserving recipient of this prestigious award. The Leinster representative to the Ard Comhairle of Comhaltas, Padraig is involved in organising and adjudicating at Fleadhanna Ceoil the length and breadth of Ireland, Britain and the USA. He was very much involved in organizing the recent Leinster Fleadh in Ballymahon where his daughter Fionnuala won the senior harp title and was also a member of the winning senior trio.

For more than three decades, he has taught music to young people in Dundalk and the surrounding areas, and indeed a number of his students have gone on to win All-Ireland titles on pipes and whistle.

As a member of Comhaltas tour groups, he has brought Irish music to audiences all over Europe, North America, Asia and Africa, and has performed at three World Expos. He introduced Bill Clinton to uileann pipe music during one of the former US President's visits here and has performed several times in Aras an Uachtarain for the current and previous presidents.

Married to Irish dancer Valerie Leech, Padraig has four children, all of whom have followed in their father's musical footsteps. They, along with the members of the Tain Ceili Band who are re-forming especially for the occasion will pay a musical tribute to the Longford man who has spent a lifetime selflessly promoting and passing on traditional music.