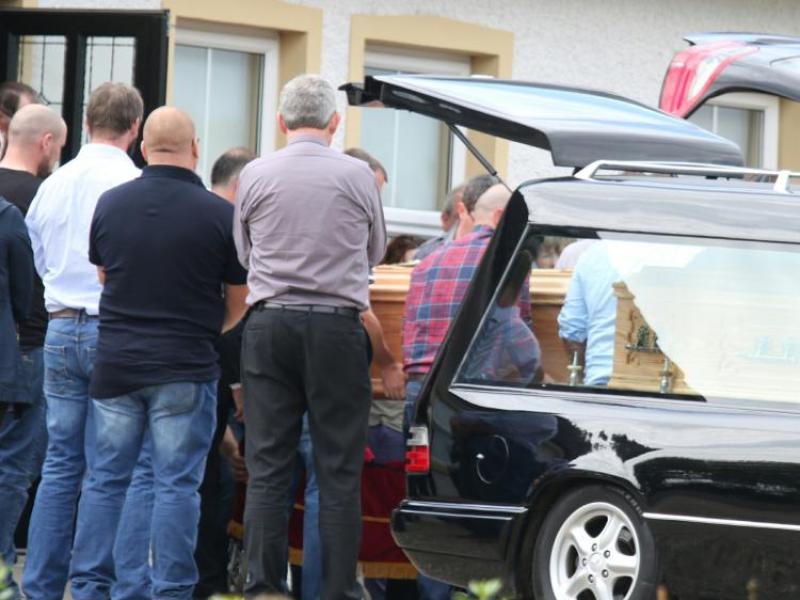 The remains of the three Bruckless women who lost their lives in Friday's early morning crash Ardee in Co Louth arrived back in Donegal on Saturday evening.

Margaret McGonigle, 69, her daughter Mairead Mundy, 39, and Rachel Cassidy Battles, 39, all died in the three-car collision. They were returning home to Donegal from Dublin Airport after a holiday in Turkey to celebrate Mairéad’s first wedding anniversary.

This evening, hundreds of mourners lined the narrow road which led to the small Ballyloughan housing estate where the friends lived, to bid farewell to three mothers from the close knit community.

Around 5 pm the remains of Margaret McGonigle and Mairead Munday passed the church in Bruckless, followed by an endless stream of cars. A guard of honour stood in respect at Naomh Ultan's GAA club. A few hours later, the remains of Rachel Cassidy Battles arrived.

There were scenes of immense sadness as the coffins of the three rash victims were brought into the tranquil South Donegal village.

The three women were close friends and they were held in high regard by the entire community. The number of people who were present this evening stood testament to this.

Around 400 people attended a rosary in the local church on Friday night to pray for the bereaved, deceased and injured.

The funeral mass of Margaret McGonigle and her daughter Mairead Mundy will take place in the Church of Saint Joseph and Saint Conal in Bruckless at 11 o'clock on Monday morning, with burial afterwards in the adjoining cemetery. Their remains will repose at the home of the late Margaret McMonigle at Bally Loughan, Bruckless.

The funeral mass of Racheal Cassidy Battles will take place in the Church of Saint Joseph and Saint Conal in Bruckless on Monday at 2.30 pm, with burial afterwards in the adjoining cemetery. Her remains are reposing at her late residence at Ballyloughan, Bruckless.

A rosary will take tonight at 9 o'clock and 10 o'clock. A shuttle bus will operate from Bruckless National School to the wake houses, leaving a one way system in operation.