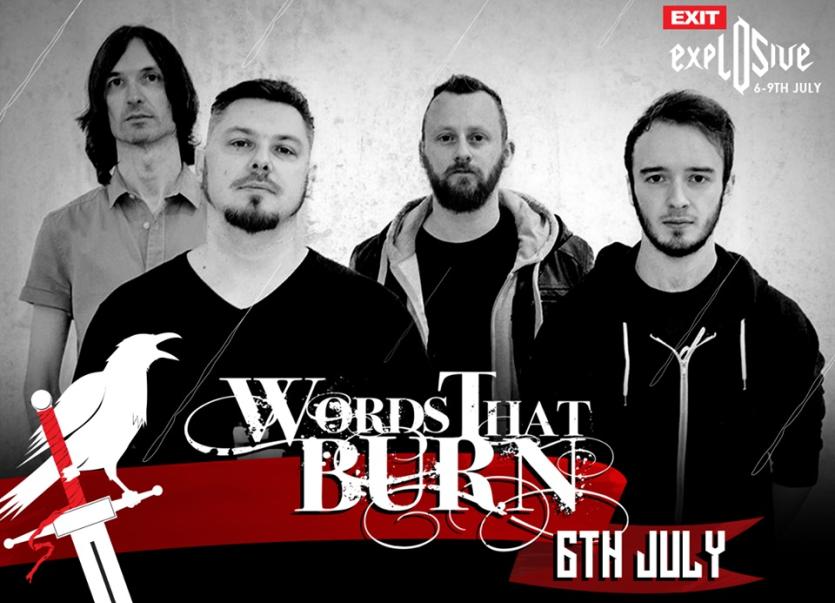 Dundalk metal band Words That Burn, are certainly making their mark internationally, with the news that they are to play EXIT festival in Serbia, as part of a European tour this summer.

Founded in 2010 in Dundalk, Words That Burn are Roni MacRuairi (vocals & guitar), Ger Murphy (bass & vocals), Jason Christy (drums) and Shane Martin (guitars). They got together through a mutual desire to create something different to the ‘scene’ bands that flood the genre - heavy, melodic, crushing, beautiful music.

2010 – 2013 saw tours across Ireland and the UK taking in many venues, meeting many people and causing many sore necks, and other limbs.

Words That Burn’s first studio release ‘Praey’ (June 2013), introduced them as one of Ireland’s most intense alt-metal bands. Renowned for their searing live shows, Words That Burn consider each of the songs to be a sonically visual montage of hopes, fears, and redemption.

The band hit the rehearsal rooms in January 2015 to hone their sound further and take it to the next level. In July of the same year, they flew to beautiful Tuscany in Italy, where they spent a month recording their first full-length offering.

Taking musical & sonic influence from bands such as Deftones, Bring me the Horizon, Slipknot, Northlane, Killswitch Engage, Architects and The Defiled they have compiled an album of hook-laden tracks.

Since the release of ‘Regret is for the Dead’ in June 2016, album reviews have been very positive from online rock & metal magazines worldwide. The first day of release saw the album go to Number 1 in the Irish Metal, Irish and Irish mainstream iTunes download charts.

Over the course of June to October 2016 Words That Burn completed an Irish tour with shows across the length and breadth of the Republic of Ireland and Northern Ireland, as well as a European tour with dates in Hungary, Romania, Slovenia, Poland and the Czech Republic. 2017 will see another Irish, UK and European tour including a slot at EXIT festival in Serbia.

Talking to the Dundalk Democrat, it is clear to see Words That Burn fully aware of where they are going.

"We are currently in serious practice mode to sharpen up the set for EXIT", says Roni MacRuairi.

"Aside from our album going to number 1 in the rock, metal and mainstream iTunes charts the day that it was released this time last year - which was so surreal for a metal band from Dundalk to achieve - and an amazing European tour last summer, this is the defining milestone of our career."

"Sharing a bill with global megastars like the Killers, Liam and Rag'n'Bone man, we get to play the same stage with metal monsters like The Black Dahlia Murder & Destruction so we are beyond excited to bring our noise to the table."

The Irish music press have certainly become fans of Words That Burn, with Burning Metal Ireland suggesting it is "maybe one of the best albums ever released by an Irish Band", Sonic Circus Ireland calling it a "masterpiece of an album" and Metal Ireland stating "It’s a massive, confident effort from a band clearly going places."

To keep up to date with Words That Burn releases, tour dates and news, visit www.facebook.com/wordsthatburn