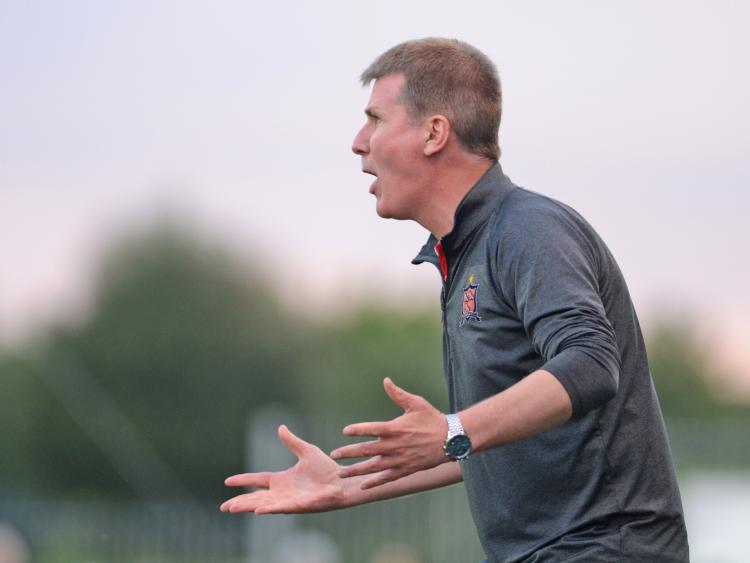 Dundalk manager Stephen Kenny was clearly a disappointed man on Friday night, having watched his side go down to a 3-0 defeat at the hands of runaway league leaders Cork City at Oriel Park.

However, Kenny remains upbeat about his “young team’s” future and expressed his disappointment at what he called the “prophets of doom” who continue to criticise his players.

“I’m not interested in prophets of doom,” Kenny said post-match.

“Dundalk hadn’t had a team in the top-four in 18 years and then we finished second, won three-in-a-row and we’re second now. It’s unrealistic to expect more than that.

“You see with Sligo and Pats, they won the league not too long ago and now they’re in a relegation battle so certainly you have to earn the right.

The Dubliner did concede his team made life almost impossible for themselves on the night with the manner of their defending.

“We made life impossible for ourselves,” he said.

“They deserved their win and we can’t have any complaints about that but it was a disappointing display from us.

“In the second-half, we took the game to Cork without being at our best. Robbie Benson had one tipped over and Jamie (McGrath) had a great chance.

“I definitely felt if we got one goal, we could have gotten two. It was one of those matches where even though you’re not playing that well you have a period of sustained pressure.

“But to concede a second goal like we did, we were killing ourselves. There was no reason to concede that goal. It was ridiculous and just not good enough,” the Lilywhites’ supremo added.

Dundalk head to Fota Island on Thursday for a four-day training camp ahead of Friday week’s derby clash with Drogheda United at United Park.

Ahead of that Kenny seemed to issue a calling for the supporters to remain behind his charges, insisting they’re not bad players over one result.

“The team that won the double, we had a midfield of O’Donnell, Finn, Towell, Meenan and Horgan and a centre-half pairing of Gartland and Boyle. None of those players were playing tonight so there have been a lot of changes and a lot of young players have come in.

“All those players are in their early 20s and they’re still learning about set-backs and how you react, character testing and all the things you learn about at the tough end of sport.

“I think that’s part of our learning curve at the moment. We weren’t good enough tonight and that’s disappointing but it doesn’t make them bad players,” Kenny added.