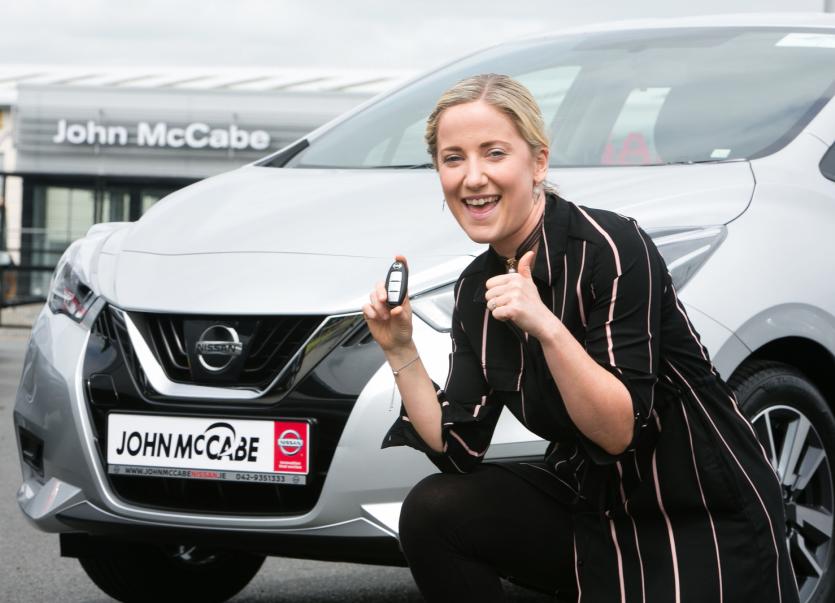 A Monasterboice mum of two will have an extra pep in her step when she takes to the start line at this weekend’s VHI Women’s Mini Marathon having collected the keys to a brand new Nissan Micra.

Emma McGovern won the stylish new car when her name was drawn from the list of almost 35,000 women who are set to take part in this weekend’s event, which Nissan supports as official car sponsor.

The big surprise was sprung by Nissan when Emma visited Elverys Sports in Dundalk on Sunday to collect her race number.

“I had no idea. I still can’t believe that I’ve won. This is my first time to enter the race and I only signed up in March after my friend, Carol Argue, coaxed me into it,” said Emma.

Although a native of Monasterboice, Emma is now living in Carrickmacross with her partner Aaron and two daughters Eve (4) and Lilly (1)

“The car couldn’t have come at a better time.  Eve starts school in September and we needed a second car because Aaron works in Dundalk. We are also getting married in October so our new Nissan Micra has arrived at the perfect time,” said Emma.

“I’ve never had a new car and have always driven a car. This car is really going to help, and us three girls have already told daddy that we will be the ones driving the nice new car,” she quipped.

Emma is really looking forward to Monday’s VHI Mini-Marathon and is hoping to run the full 10km distance. “I started as a walker, but I’m running five kilometres at the moment. If I could do it without walking, that would be great, but I’ll enjoy it either way,” she said.

Nissan long-standing car sponsors of the  VHI Women’s Mini Marathon. Every woman who entered the event before March 31st was automatically entered into the draw to win the all new Nissan Micra which is one of the most talked about cars since its launch last month. The 1 litre SV model that Emma won is valued at €18,000.

“Nissan are delighted to congratulate Emma on winning the all new Nissan Micra which is one of the most stylish cars on the road.  We look forward to seeing her at the start line on Monday and wish her many years of happy motoring as a new Nissan driver,” said McGann, Head of Marketing at Nissan Ireland.