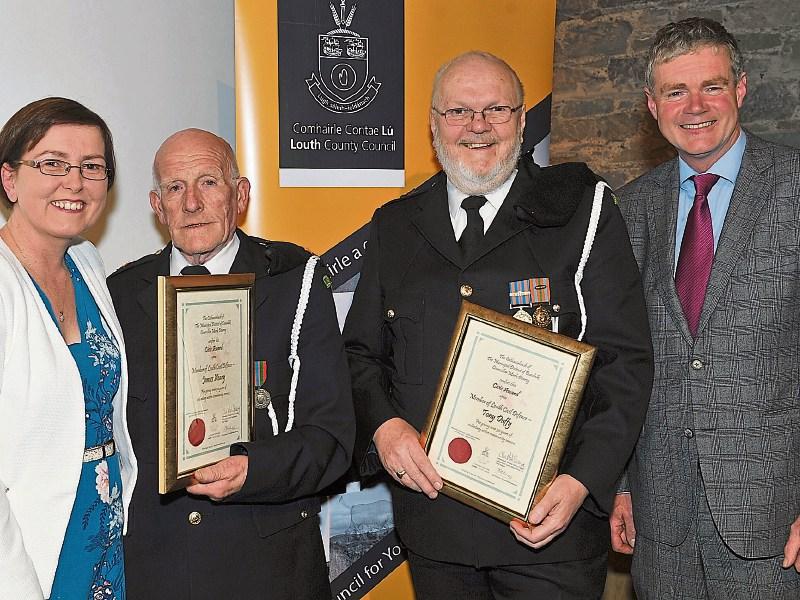 To mark the occasion, we caught up with some of Dundalk's foremost volunteers, all of whom received awards at this month's Inaugural Municipal District Civic Awards.

"My first engagement with the Arch Club was over 20 years ago. My son is a cerebral palsy sufferer so that used to be the height of my involvement but it soon became apparent that the group was in need of volunteers.

“I joined along with my friends Helen Murphy and Majella Walsh and before I knew it I was serving as club secretary. I would later be put forward by the committee as chairperson and served in that position for 12 years.

“It has proved to be such a fulfilling experience, affording me the opportunity to meet so many wonderful people and friends that have become such a huge part of my life. In terms of my principles as head of the Arch Club, I always treated members the same way I treated my son at home - like everyone else. That family ethic was carried right through, with my other son and even my granddaughter getting involved.

“The Arch Club helped members to engage in several creative outlets, from arts and crafts through to music and discos. There would also be a series of parties throughout the year, marking the likes of Christmas, Halloween and Easter. One of my fondest memories is very much in that vein when, in June 2007, on the club's anniversary, we organised a Debs-style ball for the members at the time. The likes of McKenna Man and Tony McDonnell couldn’t have been more helpful in that regard, giving everyone discounts on dresswear and making the whole thing possible. Those kind of functions are invaluable, affording these kids the chance to enjoy an occasion they would ordinarily have been denied.

“I tried my best to help them overcome that stigma, and was absolutely over the moon to get the award. It really means the world and I would encourage people of all ages to get involved, from young people looking to get involved in the care profession, to older people who just want to lend their time to a worthy cause.”

“I’ve been with the Civil Defence for over 50 years but it feels like the blink of an eye. My involvement began innocently enough when my boss in Kilsaran advised me to specialise in the skills of fire prevention. From there came the Auxiliary Fire Service.

“Things have obviously come on leaps in bounds as years have gone by, the advent of equipment like long ladders and harnesses increasing the level of skill involved. That’s also true on the medical side of things. When I first started we were all naturally trained in the fundamentals of first aid, but now there are specialised EMTs and paramedics. It’s a lot a more advanced.

“And while the technical side of things may have changed, the ethic has always been the same. The Louth Civil defence has always had a sterling reputation around the country, taking part in national competitions. We’d always tend to qualify from the regional sections and end up competing all over Ireland, from Cork to Donegal.

“It really is a valuable resource for the community and one I’m delighted to have gotten involved. I was delighted to get the award and I would encourage anyone with an interesting in volunteer to get started, young or old.”

These sentiments were echoed by James’ longtime colleague within the civil defence, Tony Duffy.

“I also joined in the 1960s, not long after the munition crisis in Cuba. Needless to say there weren’t as many recreational outlets around Dunleer at that particular time, so the Civil Defence began as much as a social venture.

“I served as a rescue instructor, devoting four of five nights a week to the cause for the best part of 53 years. I feel like I gave everything I could and in return I got so many fond memories, an amazing sense of camaraderie.

“It's also invaluable in the realm of life skills generally. I’ve met so many people of all ages who’ve flourished in their professional life because of values and traits instilled in them by the civil defence. As such, myself and James would always encourage those with a capacity to lend a helping hand to do so, to serve as proper members of society and upstanding citizens.”

“I was just absolutely thrilled to receive the award, and I’m not embarrassed to admit I shed a tear when I opened the letter! When you devote your whole life to something and are acknowledged in such a way it really is special. I was lucky enough to meet President Michael D Higgins, himself a huge fan of the arts, and now this award takes pride of place beside the picture I have with him.

“I first got involved in music when I was just four years old, my grandparents and school teachers including me in one thing and another.

“I never looked back from there really. I fronted the YouthGroove group in Dundalk for 15 years, trying to give young people an outlet for their singing and dancing talents. I had been involved in the panto in Dundalk for a long time and a lot of young people were asking me if I could help them do something and I decided to give it a go - that's how Youth Groove got started.

“More recently I’ve begun to focus on my production collaboration with Terese and Patrick Dunne at Stage One New Musical (SONG), giving children from the age of 11 a chance to embrace their talents.

“It has been such a memorable experience for me. I’ve always maintained that the most important thing you can give in life is your time, and I’ve found that young people in particular are so willing to give.”