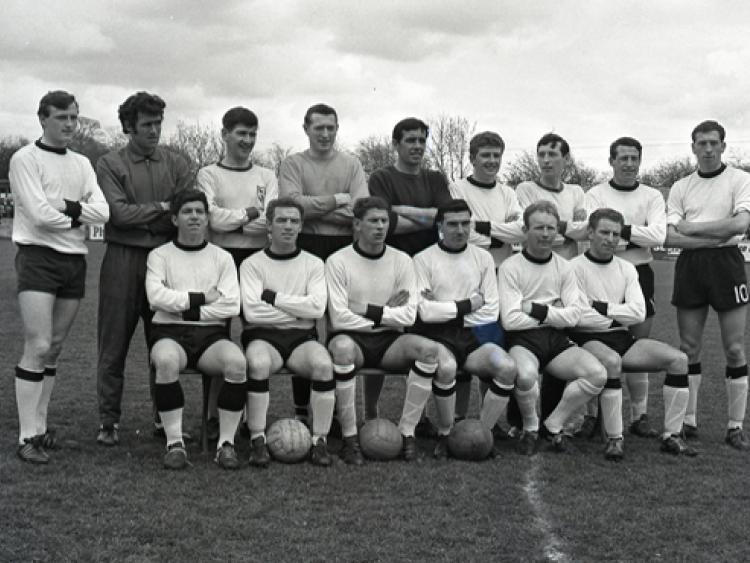 It’s 50 years since Dundalk captured their third league title. The Lilywhites, managed by Welsh native Alan Fox, eased to the 1966/67 championship with seven-points to spare over title-rivals Bohemians.

Fox’s men wrapped-up the League of Ireland crown in somewhat peculiar circumstances; as the Dundalk Democrat reported the morning after the Lilywhites were crowned champions having defeating Shamrock Rovers 2-0 – “Last night’s win clears the air in a week of the greatest uncertainty in the history of the club.”

That was in reference to the events of the previous Sunday where Dundalk knew a victory in Sligo would guarantee them championship honours, and with Bohs going down to Drogheda on the same day, a point alone would have sufficed.

However, with less than two minutes to play in the Yeats County, the referee abandoned the game following a mass pitch invasion by the home support which left the league with a decision to make as to whether they would order a replay or allow the result to stand, which would have handed Dundalk the title.

No decision was forthcoming before the next Friday night when Dundalk hosted the Milltown men at Oriel Park. The victory over Rovers sealed a second title in four seasons for the Lilywhites in front of a crowd of roughly 10,000.

That season saw Dundalk complete a treble of sorts with the League of Ireland Shield and the Top-Four Cup also basing themselves in Oriel Park before the season was out.

The year could have been even better had the Lilywhites managed to avoid a 1-0 defeat to Bohs in the Leinster Senior Cup Final.

“It was one of the most successful seasons Dundalk have ever had, there’s no question about it,” Murphy told the Dundalk Democrat.

“When you win three trophies and finish as runners-up in another it’s a highly successful season.

“At the end of the day, whatever about wanting to see good football, what supporters look for is the winning of trophies and the 66/67 team did that in spades.”

Murphy also offers a good insight into the kind of team Dundalk were in those days.

“That team had probably some of the greatest goal scorers that Dundalk have ever had in Ben Hannigan, Danny Hale, Derek Stokes – all top-class goal scorers.

“My memory is that they must have scored 60 or 70 goals between them that year.

“And they were supported by tremendously hard-working wing-halves in Kevin Murray and Mick Millington.

“Overall, they were a very powerful and physically strong team, particularly in defence with the player-coach Alan Fox, with excellent goal scorers. They’re amongst the best we have ever seen with the club.”

The team included two natives of Dundalk in Patsy ‘Tootsie’ McKeown and Francie Callan, both of whom still reside locally. The pair were also the only two survivors from the previous title-winning side of 1962/63.

And McKeown, who made almost 350 appearances for the club across 12 seasons, looks back on that team as one of the best he played on.

“It probably would have been a better team than the one who won the league in 1962/63,” McKeown said.

“I don’t know if it had better footballers but we certainly had a good team in 66/67 having brought in a lot of new players like Jim Burke and Danny Hale.

“There was plenty of excitement around the town about the team. The pitch at Oriel Park had also improved which helped our football because before that you would have thought there was cattle grazing on it and there was a big hill on the field too.”

The previous pitch was unique for the gradient on it which sloped towards the Ardee Road end of the ground. However, when a new board took over at Oriel Park in 1966, high on their list of priorities was to improve the pitch which coincided with its direction moving 90 degrees, the installation of a new stand and later, the erection of the ground’s first set of floodlights.

Local business man Tom McGrath was the driving force behind the new board and Murphy believes the infrastructural changes that McGrath pushed for had a big impact on the success of Dundalk that season.

“There was also a new board who came in and provided the finances that bought the team, got in the manager, built the stand and later built the floodlights.

“Everything was new and there was that whole impression of newness, particularly when we went up for the first home match and you saw the Oriel Park pitch turned around 90 degrees. So there was a sense of a new era and it turned out to be a new era and became known as the Fox era. Even though Fox himself was only there for a season and a bit.”

Callan, the sixth highest goal scorer in the club’s history, reflects fondly upon the atmosphere in the town and at games in the aftermath of Oriel Park’s redevelopment, especially with the team performing so well.

“The atmosphere was just electric. I think 14,000 people jammed into Oriel Park for a Shield game with Shamrock Rovers.

“We were a very strong team, although I still prefer the 62/63 team because the 66/67 side was more or less a bought team.

“But, I suppose when the new committee came in and developed the ground and picked up all the best players from around both the League of Ireland and the Irish League, you couldn’t argue.

“Fair play to the committee for getting the team because it was a very, very strong team with outstanding players.

“And, to be fair, any team who wins the league has to have very good footballers but, to me, I always thought of it as a bought team.”

McKeown and Callan harbour good memories of the team’s player-coach Alan Fox, with both having tales to tell about the kind of person the Welshman was.

“I got on well with Alan,” said McKeown.

“But, I think he was a bit of a bluffer,” he laughed. “He said he had trained all these teams in England but the truth was he hadn’t.”

“Our training would have been running around the outside of the field, while he would run on the inside and cut corners,” he quipped.

“He certainly brought great publicity to the place though. Him along with the new committee.”

While, Callan remembers the day that Fox came to meet with the board to discuss the possibility of taking the job. The former inside-forward even reminisces about how Fox brought ‘his agent’ with him.

“I got on well with Alan,” Callan said firstly.

“I was supposed to be painting at the time but I was mostly out training in Oriel Park and I met Alan before he went in for the interview.

“His first question was about money and ‘had they got any,” he laughed.

“His wife was there with him and he had to okay any terms with her before agreeing to them. He came out the first time and was happy to settle on what the board had offered, but she told him it wasn’t enough so he had to go in and ask for more.

“They must have given him more I suppose…”

The prize for winning the league that year was a trip to Spain to play in the ‘Spanish Cup’.

A competition which the Lilywhites won.

“That was a reward for winning the league,” Callan revealed.

“Although we mostly played Spanish third and fourth division teams in it. It wasn’t Atletico Madrid or anyone like that.”

That season proved to be Callan’s last in a Dundalk shirt as he moved north to play with Portadown before finishing his career back in the League of Ireland with Drumcondra.

“I was probably coming to the end of my career at that stage. I was retained for the following season but there was no sign of a contract as the new season neared and when they did offer me one, they were on the minimum terms.

“So Johnny Fearon who was training Portadown at the time asked me to go up to them and I thought, ‘I might as well sample the Irish league before I finish my career, so I went.”

Meanwhile, McKeown finished his playing days with Dundalk although it was ultimately a double leg-break in a game in the Netherlands which put an end to his career.

The 1966/67 season is ultimately one that stands out in the long, illustrious history of Dundalk FC and, author of ‘The History of Dundalk FC, Murphy feels that season and football at that time can be summed in with the following:

“Remember this,” he said.

“The last match in the Shield that year was against Shamrock Rovers and the attendance was 14,000. It was reported that there were 40 buses left Milltown that morning for Dundalk.

“That just gives you the idea of the sense of occasion and excitement that there was. Where would you get 14,000 people now. Into Oriel Park? Definitely not,” he finished.