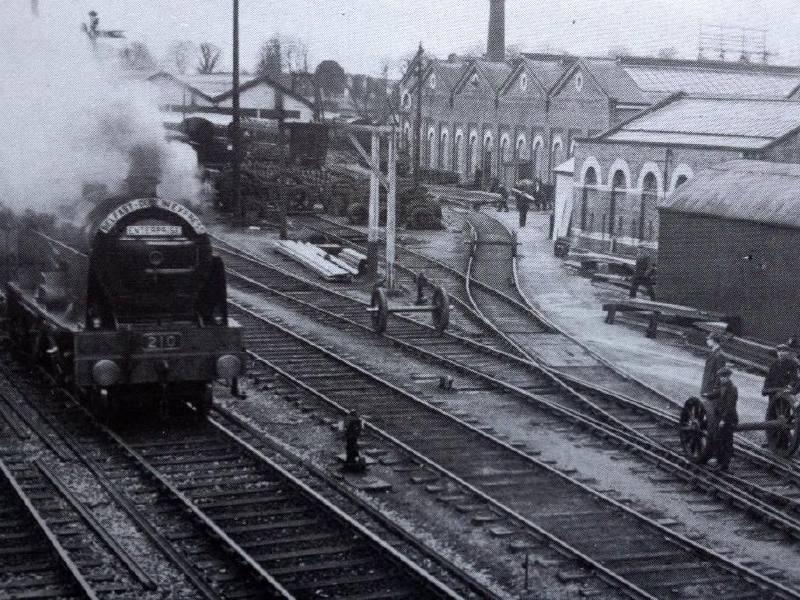 When I was a young reporter one of my duties was to attend the regular monthly meetings of the Board of the Dundalk Harbour Commissioners at their offices in Quay Street.

These meetings were mostly very boring affairs that seemed to endlessly discuss the same problems regarding the running of Harbour. There was seldom any news that was of great interest to Democrat readers and, for that reason, it was a fairly easy assignment so I did not make any complaints about having to cover those meetings.

The main business of the Port sixty years ago was the importation of coal but the one thing which stuck in my mind was that older members of the Board were constantly repeating the suggestion that they should be doing something to 'revive the timber trade'. It did not mean much to me at the time, and probably not to the ordinary people of Dundalk, but it seems that, at one time, the importation of timber was very important to the trade and industries of Dundalk.

For one thing the importation of railway sleepers was essential to the railway system which was the 'life blood' of Dundalk employment for over 100 years. During that period the G.N.R. (I) company had a timber boat calling once a week at the Quays with a cargo of untreated sleepers from Russia and the Baltic states. The wooden sleeper carrying vessels were larger than colliers and were unloaded directly onto railway wagons on the quays.

The train then ran to the timber yard at Barrack Street Goods Yard where the wood was treated with creosote in large, streaming, tanks. Concrete railway sleepers did not come into use on the rail system until the 1960s and, even then, they were not in common use for decades.

What the railway company did for supplies of wooden sleepers during the two World Wars, I am not sure, but an old railway worker tells me that, when he was a young fitter apprentice, the company bought a lot of timber in logs from Cork and cut them into sleeper lengths themselves at the timber yard.

Another aspect of the railway sleeper trade was that sleepers that were replaced regularly by 'line gangs'. The used sleepers were sold to farmers, and as a result, old creosote wood can still be seen in fencing and sheds on farms all over the North-west. The old sleepers were also used in the building trade, as they took a long time to rot, they were particularly useful in supporting oil tanks for central heating systems. When the reinforced concrete sleepers took over, the supply ceased and the result was that you probably could not now get an old railway sleeper 'for love nor money'.

The railway sleepers, however, were not the only aspect of the timber trade at Dundalk Port, as wood was being imported at Dundalk Harbour for centuries. Young people today can scarce understand how important wood was in all sorts of human activities up until the middle of the last century when synthetic materials began to be developed. There used even be an old jetty at Dundalk Quays which was known as 'The Timber Wharf'.

Interestingly Don Johnston, President of the County Louth Archaeological and Historical Society, makes that point that wood coming into Dundalk, from the New World of both Americas, may have been loaded merely as ballast of ships coming back across the Atlantic after depositing emigrants on foreign shores and even vessels carrying exported goods manufactured in Dundalk.

He says Sir John MacNeill, the great railway engineer who lived at Mountpleasent, used a lot of wood in his various enterprises around the Ballymascanlon area. He had a number of mills in the area and imported a lot of coal at his private quay on the north side of the Harbour, on the Ballymascanlon River Creek at Ballyboys. One of his more unusual mills was his spade factory at Deer Park. Digging implements must have been in great demand for the building of the railway embankments, bridges and other works, like the Navvy Bank which he designed. These implements must have required a lot of timber for their shafts which was readily available from ships coming into the Port.

How this timber trade worked was that that ships coming into the Bay would unload their cargoes in that Castletown Estuary at low tide. Workers would then go out with horses to collect the logs with specially designed rigs to drag the logs to the saw mills along the Quays. The ships would rise again on the incoming tide and either sail off or berth at one of the wharfs to collect cargo for export.

Charlie McCarthy tells me that this was difficult and dangerous work, as the wood was in 40 feet lengths of 12 X 12 foot (sometimes 24 X 24 ft.) dimensions that would have been hard to handle. The logs were loaded at the bow of the ship and tossed over the side when they reached the ports. The voyages also very dangerous for the sailors as there are many reports of cargoes shifting in storms and causing the vessels to capsize and even causing injuries to sailors trying to secure the cargoes.

All things considered, the 'Timber Trade' was part of the social history of Dundalk Port and Town which has gone forever! It is no wonder, therefore that the older folk used to speak of it with a degree of reverence.