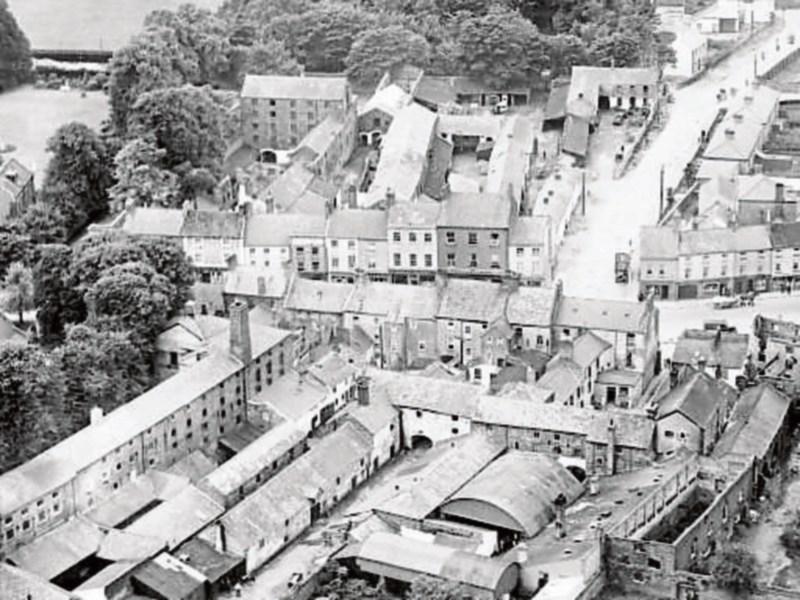 Writing recently about the origins of St. Helena Park has reminded me that no part of central Dundalk has changed more in my own lifetime, a period from the 1930s up to the present day, than the area along the Castletown River Estuary from the Big Bridge to the Quays. I do not know where I would begin to describe the changes to the topography of the area but I believe that The Park itself lies at the heart of that change. It was there when I was a young child, with the Bandstand and a little pond in the middle of it, that seemed to me like a fairyland.

My mother often took me to it in a push-chair, the equivalent of a modern child's buggy. I think would have been on Sundays in good weather, but it was just far enough away from my home to be out of a reach as a playground, which, of course, added to its enchantment! It was not nearly as well kept in those far off days and, I think, the railings had fallen into disrepair but that did not make any difference to the eyes of a young child! Later I passed it on my way to school but never had much time to stop and enjoy the scenery; other than to watch the steam trains puffing their way across the 'First Metals' railway bridge.

Later, when I went to work in a coal office at the Quays, the Park was a Mecca for teenagers but was still out of my reach, other than that I had school-day friends who lived in Castle Road who welcomed me to their homes. During the summer holidays we played in the fields of St. Mary's College where we were joined by boys who had attended at least two other secondary schools to mine but we were the best of friends. Those were some of the best days of my life and I can recall watching some of the last trains to make the journey to Cooley, passing out over the curving spans of the metal bridge.

When I started work in the Dundalk Democrat offices in early 1953, St. Helena Park became the centre of attention again! At that time there was a big effort being made by members of the Dundalk Urban District Council to get a Swimming Pool for the town and they decided that St. Helena Park would be the ideal location. They even had a wooden model for the proposed Pool made by a local craftsman and it was on display for weeks in the Town Hall. I wonder what happened to that model and if there is still anybody around now who knows who built it. The Concert Hall was being reconstructed at that time, after the fire which destroyed the old one in 1947 and I think the model was on show to the public in what was known as The Newsroom where the Council met until a new chamber was fitted out for them at the top of the stairs.

Everybody at the time thought that it was a great idea because there was no public swimming pools nearer than Dublin or Belfast and, of course, well out of the reach of most people from Dundalk! I cannot remember why the project failed but I think the Council could not get any financial support from central government and it would have been too much of a burden on the rates of the town which every householder, as well as the commercial business and industry, paid. There may also have an engineering problem also in that the public water supply from the Aghnaskeagh Storage Reservoir at Ravensdale might not have been considered large enough to provide a supply for a swimming pool which would have required daily changing.

Anyway, the provision of a public swimming pool ceased to be a priority for the members of the Urban Council who began to concentrate their efforts in getting new houses for the town. It was to be another thirty or more years before the Urban Council began to look at a new plan to build a swimming pool in the urban area. In the meantime, what money they had gathered was diverted to the outdoor sea-water swimming pool which was built by the County Council at Blackrock, opened in 1964.

St. Helena Park has improved greatly over the past half-century, mainly due to the efforts of the Urban and later Town Councils Parks Committees. The change that has altered it most, however, over the past century was the construction of the Tain Bridge to link the two parts of the Town's Inner Relief Road opened in 1996. No doubt, it will not be last such change here but St. Helena Park will always have a fond place in the hearts and minds of Dundalk people, no matter to which part of the world they are dispersed!