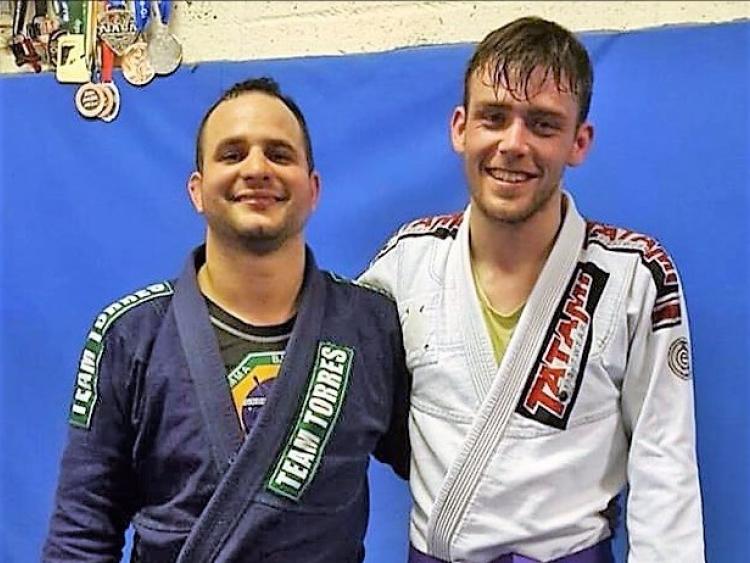 Local BJJ enthusiast and renowned MMA Journalist, Andrew McGahon from Seatown in Dundalk has made another piece of local history, this time at the age of 24 being the youngest person from Dundalk to attain the prestigious rank of Purple Belt in the martial art of Brazilian Jiu Jitsu.

Having his interest piqued in MMA whilst still a student at the local Grammar School, at a time when the popularity of promotions such as the UFC were on the rise and the sport was yet to become mainstream, he joined the local BJJ club and started training under local instructor Gary Fegan in 2010 before training directly under the auspices of National Chief

Instructor Sebastiao Torres from early 2011.
From the onset Andrew, keen to test his new found skills, has been very active on the competition circuit at the highest levels both nationally and internationally winning many accolades along the way and having competed as far afield as America.

His job as a Video Interviewer and Content Creator with Conor McGregor's news agency 'The MacLife' has also provided him with the opportunity to train in other clubs in many other countries across the globe, interestingly Andrews promotion to Purple Belt coincided with the anniversary of what was a red letter day for Irish Martial Arts when exactly four years ago to the day Conor McGregor weighed in for his UFC debut where he subsequently KO'd Marcus Brimage and changed the sport as we know it.

Andrew keen to pass on his passion for the art has recently began teaching BJJ at the local Team Torres Dundalk club, and due to demand the club has recently commenced Beginner Only classes which are ran on Mondays and Thursdays from 6:30pm to 7:30pm, further details can be found on their Facebook page DundalkTorres.