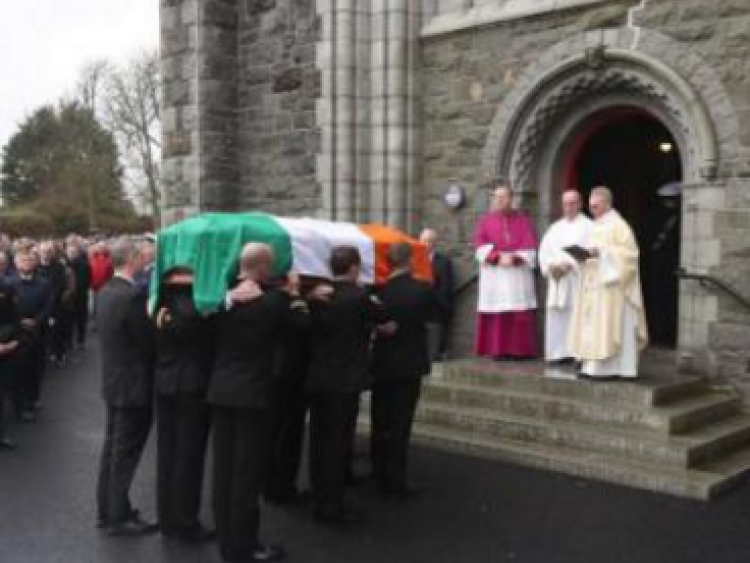 Guards of honour from local schoolchildren and Irish coast guard members served as a fitting tribute to the late Mark Duffy as he made his way to St Oliver Plunkett Church this morning.

The deceased captain’s funeral mass took place at the Blackrock church, with cremation set to follow at Dardistown Crematorium at this afternoon.

President Michael D Higgins led mourners for Mr Duffy, who was one of the four crew members on board Rescue 116 when it went down off the west coast earlier this month.

Bag-pipes broke an otherwise palpable silence as he made his final journey, his coffin draped in tricolour and carried by his former Coast Guard colleagues.

Mark’s wife Hermione and his children Esmé and Fionn followed behind, supported by a large crowd of relatives and friends.

In a service led by Fr Stephen Duffy and Fr Padraig Keenan, mourners heard: “It’s a community catastrophe. A dark cloud descended over the island of Ireland over the tragic accident of R116. Nowhere else was that darkness more felt than by the families of the crew members.”

An array of symbols were brought to the altar representing Mark’s life, from his wedding band to his flying helmet, each testament to Mark’s love for both his family and his job.

Local TD from Louth Declan Breathnach said the community is still in shock.

“Captain Mark Duffy was a great man in the Blackrock community and obviously the community are absolutely shocked," he said.

"Books of sympathy have been opened and there has been an outpouring of grief."

He told Newstalk Breakfast: "[Mark] was genuinely one of the most meticulous men I have ever come across [...] In his own personal presentation and conduct... a more professional man you could not come across.

"That he has gone in the heroic manner that he has, that he sacrificed everything for others, is a mark of the character of who Mark Duffy was. It was a privilege to have known him."