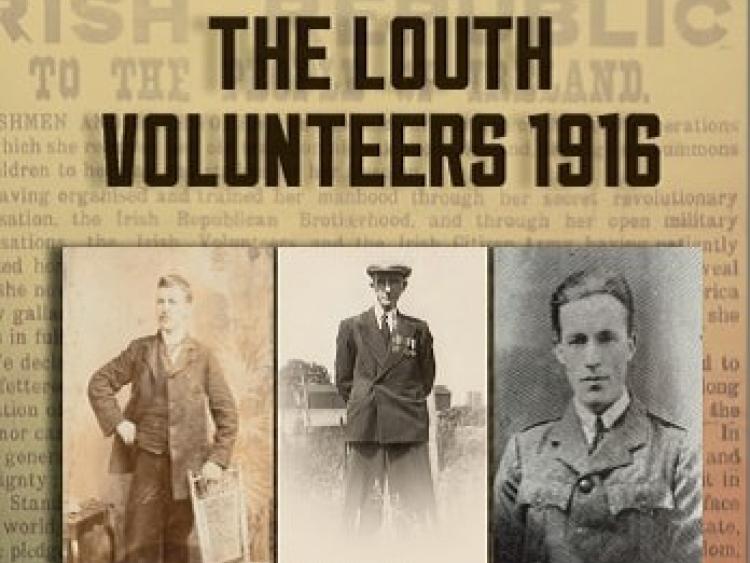 The book 'Louth Volunteers 1916' goes on general release to the public to coincide with the events of Easter week.

The story is the definitive account on the journey of the Louth Volunteers and how it corresponded with events in Dublin as it is told in their own words. The book also shines a light on the social history of Louth in the years leading up to the Rising and the aftermath. Members of the Louth Volunteers 1916 page and relatives of those who took part, Alan Bogan, Marcus Howard and Padraig Agnew felt it important to do justice to the memory of the Volunteers “'These Volunteers weren' motivated by money, but by love of their country,  to take on an Empire.'

The foreword has been written by Eoin MacLochlainn, a relative of Patrick Pearse who was fascinated to find out what happened outside of Dublin. The book gives a real insight into how the Louth Volunteers did everything they could to follow directions given to them in spite of the countermanding order by Eoin MacNeill. The Louth Volunteers had tried to form an alliance with the Fingal battalion to help form a ring around the city.

Author Marcus Howard had this to say:

"The book had been launched to relatives in 2016 as it was important to get it out in the 100th year anniversary. We were blown away with the demand for the book and it sold out in  just over two weeks. We are now on a second run with more photos and improvements made to the finished book. We know that Louth had an important role to play and were one of the few areas to mobilise around the country. The book has had to be completely financed themselves yet has been a huge success already.

"The book also tells the story of the confrontation a number of Volunteers had in 1910 when they faced down a number of people who wished to praise the accession of King George V. Many witness statements given to the Bureau of Military History are bursting with fascinating details."

Alan Bogan has said: "we are delighted to see the demand for such an important time in our history and feel we have done our best to remember our relatives correctly."

Marcus added:"A number of 1916 relatives from around the country have snapped it up as well as many history enthusiasts. One person at the relatives launch bought 16 books. We have received orders from Australia, Chicago and London."

The general launch will be on Tuesday April 11th in The Stonehouse in Blackrock at 7pm. The book is being released in various shops over the Easter period and can also be purchased at the www.thewritespace.ie as well as the Facebook page The Louth Volunteers 1916.