Who were these actors in Dundalk back in 1911? 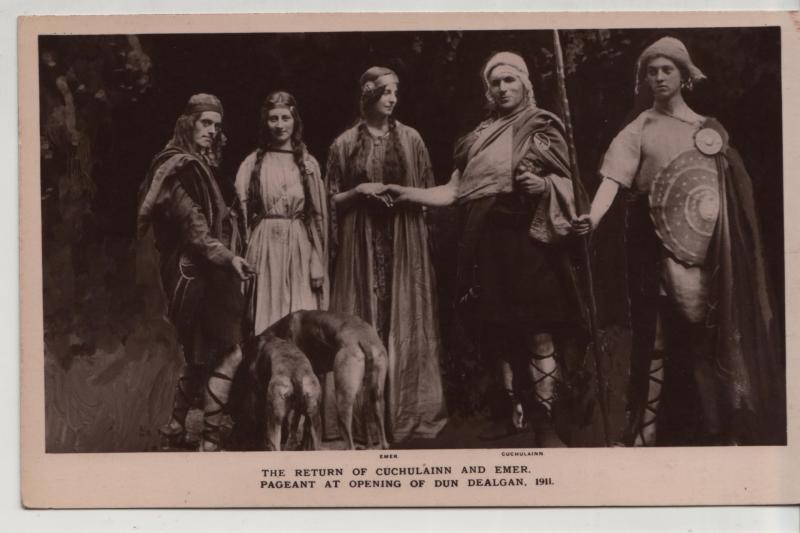 One hundred and six years ago, on the 15th August 1911, the County Louth Archaeological Society held an event to launch a new museum at Castletown, Dundalk. As part of the opening ceremonies,an ‘pageant troupe’ numbering over 50 actors performed a spectacular outdoor pageant entitled ‘The Return of Cuchulainn and Emer’ before an audience of at least 750 people.

Writing of the event, Joseph Dolan, Vice President of the Society, recorded that ‘the long lines of the youths and maidens … in their many tinted flowing robes, and their easy but graceful march, the arrival of the chief and his bride on horseback, and the festivities in their honour, the choruses, dances, and songs performed before them [had] a charm of originality [which] on the slope of Cuchullain’s dun [Cúchulainn’s castle], under the shady trees and lit by an occasional slanting ray that penetrated the leafy shelter, the display was most romantic’.

Thankfully for posterity, avisual record of the event survives in four B&W postcards which were published by Tempests printers of Dundalk in September 1911. Recent research by Paul Gosling, Lecturer in Heritage at the Galway-Mayo Institute of Technology has pieced together the particulars of the event from the rare postcards. His paper on the subject is due for publication in the County Louth Archaeological & Historical Journal for 2017. While much detail has been recovered, one stumbling block has been the identification of the principal actors, five of whom are pictured above.

These actors were from Dublin and were drawn from local Gaelic League branches. Moreover, they had performed another pageant entitled ‘A Feis at Ancient Tara’ in the Rotunda Gardens, Parnell Square, Dublin only the week before as part of The Gaelic League’s annual Oireachtas. Though it was widely reported in the newspapers, no photographs the Tara pageant appear to survive. The photographs of the Dundalk pageant are thus doubly important as effective records of the costumes and personnel of both events.

The identification of the actors would greatly add to the understanding of these pageants as well as highlighting the importance of outdoor drama in Ireland in the years immediately preceding World War One.

In a recent pioneering study of pageantry in Ireland entitledAll Dressed Up (2014),Joan Fitzpatrick Dean offers a context for pageants such as that performed at DúnDealgan and the Rotunda in 1911. Writing of the period 1905-1914 she observes that‘Ireland was not only drama-mad but Cuchulainn-mad as well’ (ibid., 56). The elaborate open-air pageants staged by Castleknock College and Scoil Enda, Dublin and by the North Monastery schools in Cork, at this very period are witness to this. As it turned out, the passion for outdoor theatricals was eclipsed in 1914 when, as many have commented, the twentieth century really began. But even before then, the formation of the Ulster Volunteer Force and Irish Volunteers in 1912-13 meant that pageantry evolved into more militaristic forms of dressing up.

Paul Gosling is due to give an illustrated lecture on the event – Halycon Days: The Opening of DúnDealgan Museum (Cúchulainn's Castle), Dundalk August 1911 – on Thursday, 2nd March 2017, at St Vincent’s School, Seatown, Dundalk at 8.00 p.m. He would welcome any information regarding the actors at paul.gosling@gmit.ie. or Paul Gosling, Dept. of Heritage & Tourism, Galway-Mayo Institute of Technology, Dublin Road, Galway.