Another view of the '1910 Demonstration' in Dundalk 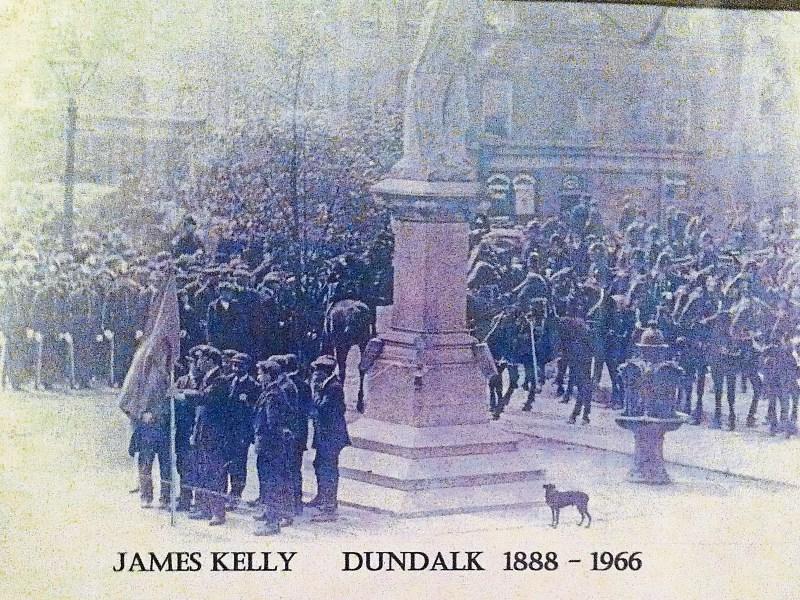 During the past week I have received an email from a man named Dermot Kelly, whom I presume lives somewhere in the Liverpool area, which included an old photograph of a famous incident at Dundalk's Courthouse Square on May 17, 1910. The occasion was the proclamation of King George V (the present Queen's grandfather) as sovereign of Great Britain (including Ireland) by the High Sheriff of County Louth, R. J. Montgomery, Killineer, Drogheda. The scene is well documented in several photographs that have already been published and picture postcards of it were circulated but I had never seen this particular photograph previously.

This photograph, however, gives a different view of the Sinn Fein demonstration at the foot of the Maid of Erin 1798 Monument which, I believe, was the very first demonstration by the party anywhere in Ireland and may mark the beginning of the War of Independence! Incidentally, I believe that it was taken by a Robert Abernethy whom you can see setting up his camera at a first floor window of his Photography Studio at the Square in a picture on the cover of Harry Tempest's 'Gossiping Guide to Dundalk', first published in 1917. Many Dundalk people of the period would have had their wedding portraits taken by him at this studio as it was the custom to go there immediately after their church wedding and, of course, he would have taken many other local family photographs.

The photograph sent to me by Dermot Kelly relates to the death of a James Kelly of Dowdallshill whom, the inscription claims, was the last surviving member of the protesting Sinn Fein party on the day. Dermot tells me that this James Kelly was a first cousin of his father who was born on Merseyside in 1904 and lived in Dundalk briefly around 1920. He also mentions that this James Kelly had received a 1916 medal for his part in the Rising and there, indeed, a James Kelly listed among the Irish Volunteers who left the Hibernian Society's Hall at 30, Clanbrassil Street, on Easter Sunday 1916 to take part in the Rising. He says that he was surprised to learn that James was employed by the Dundalk Urban District Council up to the time of his death, it is really not surprising, however, as many men who had been involved in the struggle for Independence were later employed by the Council. This information was given me by the late Canice O'Mahony who had been Dundalk Town Surveyor for many years.

The picture is also of great interest to me for a number of other reasons. Firstly it is the only which shows clearly that there were not more than about ten men in the Sinn Fein party that day and the inscription gives the names of eight of them, including Paddy Hughes of Park Street, who seems to have been the leader of the group. Secondly, you can seen in the picture some sort of a low barrier in front of the group which seems to confirm the story that the police on the day could not move them because they were standing on private property. The explanation for this is that the Dundalk 1798 Commemoration Committee had purchased this patch of ground from the Roden Estate in 1897 to allow the monument to be erected.

Another point of interest to me was that the 'Connacht' plaque on the base of monument was missing in 1910 which Victor Whitmarsh says in his 'Old Dundalk' was blown off by an explosion in 1903! I have discovered something in an old Democrat recently which may give a clue as to what happened on that occasion (and will deal with it later).

I was also fascinated by the little black dog which is standing beside the protesters! I had noticed that little dog in other pictures and it clearly belonged to one of the protestors. I had been told that the black dog was a pet of one of the Hughes brothers, Peter and Patrick, who founded the Sinn Fein branch at their Park Street home in 1907 but have never found out if that was true! If it was owned by one of that intrepid band, this dog is a part of Irish (and Dundalk's) history!

There are many other things of interest in the picture, and in Dermot Kelly's email, which I hope to be able to return to in later notes but, in the meantime, I hope that readers may be able to spot things in it which relate to their own families!