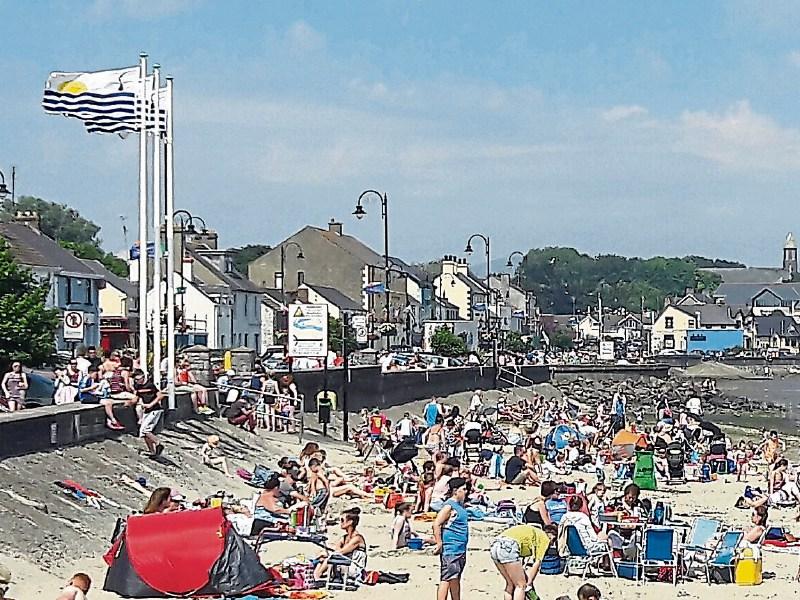 2016 was one of the most successful years ever for Blackrock Tidy Towns and for the village.

At the National Tidy Towns awards ceremony in The Helix in September, Blackrock was awarded a Gold Medal to place it in the top five per cent of towns and villages in Ireland, and it is now only 10 marks away from the overall national winner Skerries, The village also won the highly important national award for Waste Prevention as a result of the many green initiatives undertaken in the previous twelve months. For the third year in succession Blackrock won the "Louth Looking Good" Overall Award as the best presented town or village in the county, as well as winning a number of other awards in the competition. It was voted the most litter-free town in County Louth, and Haggardstown Old Graveyard was once more voted the best presented graveyard in the county.

Many new projects were delivered during the year, including new signage in various locations, further upgrading of the Fane riverside walk, improvements to the old swimming pool walkway, and a number of landscaping projects. The Tidy Towns continued to work closely with the Park Committee to further develop the amenity, including the creation of an orchard and various other projects. Blackrock Park won a prestigious community Green Flag in July - one of only 22 in the whole country to do so.

Maintaining a close relationship with the three schools in the parish remains a high priority for Tidy Towns, and they undertook a range of initiatives during 2016 including help with the annual Spring Clean, and the development of slogans for the Bring Bank area in a competition sponsored by Mace, Blackrock. In partnership with St. Oliver Plunkett's School "Eco-Tribe" and Louth County Council, a wonderful new Medieval Garden was developed in the park.

During the summer months the promenade was ablaze with colour once again thanks to the "Blackrock in Bloom" project sponsored annually by Haggardstown Garden Centre, and the "Summer Flags" initiative sponsored by Tiernan's Centra. There was again a noticeable increase in the number of visitors to the village, especially from Britain and continental Europe. This was helped by an updated Blackrock Visitor Information Leaflet and other local initiatives, and with assistance from the Tourism Officer in Dundalk and the Louth Tourism Committee where Blackrock Tidy Towns represents the village. The 15th of August was one of the busiest in recent years, reflecting the huge attraction that Blackrock now is.

The 2016 Raft Race was held on the June bank holiday. It is the main fundraiser for the Tidy Towns and was the most successful one ever, with 35 rafts participating and one of the biggest crowds ever seen in the village. The programme of events included the Junior Poc Fada with Blackrock Hurling & Camogie, the Schools Talent Competition with the Reynolds Academy of Performing Arts, a visit by the Irish Coast Guard helicopter, and of course the ever popular sandcastle competition. Harry Lee made a welcome return as compere, and the event was again televised on Irish TV.

The "Beautiful Blackrock" awards in November recognised the contribution made to the success of the village by private property owners, businesses and residents associations, and declared the late Fra Brady "Blackrock Volunteer of the Year" for his work with the Tidy Towns and other community organisations. The event was sponsored by Flanagan Motors, and a short film by Ken Finegan featuring drone footage of the village was premiered at the event.

Litter management and general maintenance goes on all year round to make sure that not an item of litter is evident anywhere in the village. Grass verges are meticulously cut and kerbside weeds kept under constant control. The Fane Community Employment Scheme under supervisor Pat Rafferty plays a critical role in all of this and it is because of the dedication of these workers that the village always looks so well. The Probation Service also plays a significant role in litter control on the beaches and foreshore as well as undertaking projects in the park in association with the Park Committee. Unfortunately dog fouling continues to be a problem in the village, and a team of volunteer Doggie Ambassadors continues to help bring home to errant dog owners the fact that they are undermining the work of so many people and the village's reputation, as well as breaking the law, by not cleaning up after their pets.

Much of what Blackrock Tidy Towns achieves is because of the ongoing liaison and co-operation between themselves and other agencies and organisations. They work very closely with Louth County Council, including the Social & Community Section and the engineers and supervisors, and also with the local Gardaí. They are active members of Louth Tidy Towns Together where they network with other Tidy Towns groups for the benefit of the county as a whole. They also work closely with all the businesses and residents associations in Blackrock to make sure that the village is always presented at its best. However, their main success lies in the fact that they have some 40 volunteers around the village on whom they can call at any time to help in various projects and initiatives. “Without the continuing co-operation and support of our volunteers and of the residents and businesses of Blackrock, and all our sponsors, we certainly would not be able to carry on” said Tidy Towns chairperson John Horan. “We want to thank everyone in the village for their support and for the major contribution they made to the success Blackrock enjoyed in the various environmental competitions this year. We wish them all the very best for 2017 and look forward to continuing our work with them in the New Year” he said.