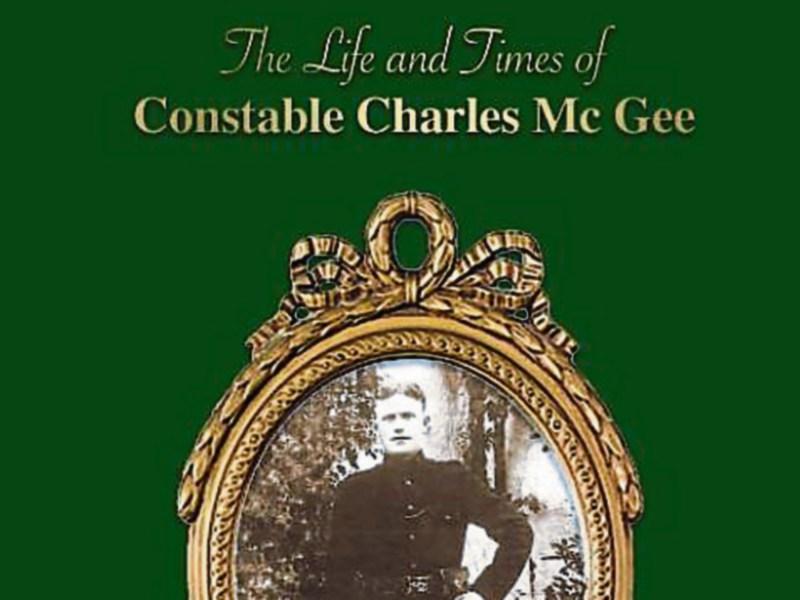 Many historical accounts have been written on the military aspects of the 1916 Rising in County Louth and on the participation of members of the Louth Volunteers in that event. However, there has been a paucity of information available on Constable Charles (Charlie) Mc Gee who was fatally wounded in the village of Castlebellingham, County Louth, on Easter Monday evening 1916 at approximately 7.30 p.m. He was the first member of the Royal Irish Constabulary to die in the Rising.

The narrative of his life and death is going to be published by his grand-niece, Dr Madge O’Boyle, on 22 December 2016 as part of the 1916-2016 County Louth Commemorative Programme. Madge is well known to people in Dundalk as she spent many years teaching in St Malachy’s School and was involved in organisations such as the Gaelic League. Books will be for sale on Thursday 22 December 2016 in the County Museum, Dundalk, in Carroll’s Newsagents on Clanbrassil Street, or from Madge O’Boyle Facebook page. The author taught in St Malachy’s School for twenty-five years and is currently employed by Coláiste Mhuire, Marino Institute of Education, Dublin. She holds a PhD in Irish History from Queen’s University, Belfast. The publication will be an heirloom account of the 1916 Rising in County Louth for future generations of Dundalk people. The publication will be officially launched in the County Museum at 7 p.m. on Thursday 19 January 2017. The account reveals the complexities of Irish history and the network of relationships that linked counties Donegal, Louth and Antrim in 1916. It is fortunate that Constable Mc Gee’s story and the 100 years’ of society’s refusal to acknowledge the memory of members of the R.I.C., is finally being recognised in the inclusive 2016 Centenary Commemorative Programme. However, Madge wishes to stress that this book is not just about Constable Mc Gee, as it delineates the development of Nationalism in Dundalk from the late 1890s and records the whole history of the County Louth Volunteers, as well as the 1916 Rising in County Louth. It is a serious academic work that seeks to give a balanced view of what happened in the county during Easter Week 1916 and includes the activities of various local Volunteers who participated in the insurrection.

A native Irish speaker from Inishbofin Island on the north-west coast of County Donegal, Charles Mc Gee was encouraged by his teacher, Master Sweeney, to join the police force in December 1912, and was appointed to Gilbertstown Barracks in County Louth on 10 May, 1913. At that time, the only other option of employment was either fishing or emigration. He was later described by Louth Volunteer, James Mc Guill, as a ‘popular’ man and was involved in sporting activities in the area.

He knew the clouds of trouble were gathering over the country by 1916. Before the Rising, he had been approached by the Volunteers to procure arms for them, which he refused to do. He had, also, expressed the desire to resign from the R.I.C. and to become a detective policeman in Scotland as he knew that trouble was brewing in Ireland, but that was not to be. Local accounts record that kind people in the Gilbertstown district had warned him not to go to Castlebellingham on that fateful evening, but he proceeded to do his duty by delivering despatches to the R.I.C. barracks in the village, where he cycled into the chaos that was created by the Volunteers who decided to commandeer food provisions and cars before proceeding on their way to Tara Hill.

By this they were tired, cold and hungry after spending the previous night sleeping out in the village of Slane. Confusion reigned due to Eoin MacNéill’s Countermanding Order. They held two members of the Irish Constabulary and made them stand along the village park. It was then that Constable Mc Gee arrived in the village on his bicycle to post mail in the local Post Office and he was made stand alongside the two other policemen. Then, a Lieutenant Robert Dunville of the Grenadier Guards and of the famous Dunville Whisky Company in Belfast, arrived in his car and was ordered to stand alongside the other prisoners.

Due to his anxiety in catching the boast at Dun Laoghaire (then Kingston), he created much tension in the Volunteers. As the cavalcade of Volunteer cars were leaving the village, one of the Volunteers claimed that he thought he saw Dunville making an attempt to draw a gun. He fired a shot which injured Lieutenant Dunville and proved to be fatal in the case of Constable Mc Gee. He died of his injuries at 9.30 p.m. in the Louth County Infirmary. He was given a military funeral and is buried in the graveyard in his native Gortahork, County Donegal. Seán MacEntee from Belfast, who later became a minister in the Fianna Fáil Government, and three other Louth Volunteers were courtmartialled and accused of his murder, even though they did not fire the fatal shot shot. MacEntee’s family once owned the Crown Bar in Belfast and his father was a Home Rule politician on the Belfast Council. Seán MacEntee narrowly escaped execution as he was second in command of the Louth Volunteers on that evening. It was the character reference of a Belfast Protestant that saved him from execution. The men were given penal servitude sentences. They were released as a result of the general Amnesty in 1917. The man who admitted to firing one of two shots on that Monday evening went on the run, and despite many notices in the Hue and Cry police publication, he was never tried for the murder of Constable Mc Gee. Constable Mc Gee was given a military funeral and is buried in the graveyard in Gortahork, County Donegal.