Dominicans in Dundalk publish book to celebrate their 800 year history 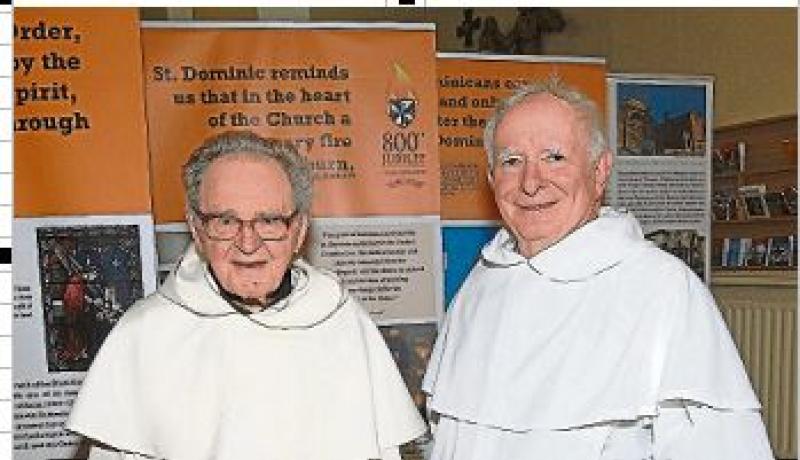 The Dominicans in Dundalk have just published a book to commemorate the 800 jubilee years of the order 1216 - 2016.
This is a special year for The Friary in Dundalk - St Malachy’s Church - which has been the home of the Dominican Fathers in the town for over two hundred years.

The prior at St Malachy’s is Fr Gus Champion, a Wicklow man, who ministered in Argentina and Portugal.
Fr Champion Serves the people of Dundalk alongside Fr Bede McGregor, who was the previous prior and who now works closely with EWTN - the global Catholic television and radio network - and lectured at St Patrick’s University Maynooth for many years.Also at St Malachy’s are Fr Gabriel Harty, known all over Ireland as The Rosary Priest, who is now chaplain to St Malachy’s Girls’ School, Fr Ronan Cusack, Fr Ciaran Doherty, and Fr John Walsh.

The book covers the history of the Dominicans in north Louth.
The Dominicans founded an abbey in Carlingford in 1305. Henry VIII or rather his chancellor Thomas Moore, destroyed and pillaged the monasteries in 1539 so the Dominicans had to continue their work secretly in the Cooley Peninsula.
In the early 1700s they started serving the people and teaching in Faughart, Haggardstown and Kilcurry and were known as the Friars of Carlingford.

The first Dominican chapel in Dundalk was an old Linen factory around Linenhall Street.
From the early days in Carlingford they had provided a school. In 1827 they opened a school in Dundalk known as the Poor School. This was two years before Catholic Emancipation, so it gives an idea of the dedication and bravery of these men.
Preaching, celebrating Mass, and teaching, by Catholic priests, was seen as a subversive activity.
It was only in 1832, three years after Catholic Emancipation, that the Dominicans were able to provide a chapel school attached to the Dominican priory in Anne Street.

A previous publication covered the history of the order in Dundalk up to 1975 and this excellent publication takes up the story from there listing the priors who served since 1975, Dundalk-born Dominicans and a wonderful history of St Malachy's Church including a beautifully article on the church's magnificent stained glass windows by Neil Skelly.
The schools are also featured, as are the altar servicers, the Friary Choir, the Friary Youth Club, and the Dominican laity, and the Legion of Mary.

There is a wonderful article on Dundalk FC legend Joe Martin who of course went to the Friary.
Fr Thomas Lawson OP left Dundalk in 1966 to join The Dominican order.
“The faithful people of Dundalk play a major role in the tremendous influence of the Dominican presence in Dundalk itself,” Fr Thomas writes.
And he reminds us that the famous black and white colours of Dundalk FC were taken from the black and white habit of the Friars of the Order of Preachers, the Dominicans.

Copies of this great Dominican story are available from The Friary and from Carrolls Bookshop Park Stree Dundalk.